Please ensure Javascript is enabled for purposes of website accessibility
Log In Help Join The Motley Fool
Free Article Join Over 1 Million Premium Members And Get More In-Depth Stock Guidance and Research
By Palbir Nijjar - May 22, 2016 at 11:00AM

Curry's playoff performance has been jaw-dropping, but his mark on Under Armour may end up being even more impressive.

The San Francisco Bay area has been the home of some legendary athletes -- all-time greats such as Joe Montana, Jerry Rice, Wilt Chamberlain, Rickey Henderson, Barry Bonds, Latrell Sprewell, and Willie Mays all played there. However, none of them may be more popular than current basketball star and Under Armour spokesperson Stephen Curry.

Before I get hate mail from fans about the greatness of Montana and Mays, please note that the key word here is popular. However, by the time his career is complete, Curry may surpass many of those Hall of Fame athletes in terms of accomplishments as well.

According to ESPN, the Golden State Warriors point guard led the NBA in jersey sales for the second straight year, surpassing Kobe Bryant and Lebron James. And it's not just the Bay area snatching up his colors. Sports retailer Fanatics reports that Curry had the highest-selling jersey in 48 states, with the exception of Ohio and Oklahoma.

His popularity is increasing by the day, and as a Brand Ambassador to Under Armour (UAA 2.61%), shareholders should be smiling from ear to ear.

While Under Armour might not benefit from those jersey sales, basketball shoes are another story. According to Bloomberg, a Morgan Stanley analyst noted that "UA's U.S. basketball shoe sales increased over 350% year-to-date." In fact, his shoe sells more than any other current NBA star and trails only Michael Jordan's signature shoe overall. 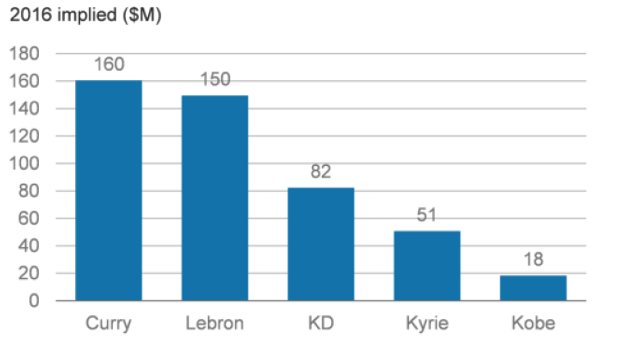 Total footwear sales in the first quarter at Under Armour reached $264 million, a 64% increase from the prior year. Curry's signature shoe, the Curry Two, played a large part in that increase -- not bad for a company that didn't even have a basketball shoe line until 2010.

Basketball differs from the four major professional sports in North America in that it likely enjoys the most significant global reach. Obtaining unbiased scientific data to prove this point was rather challenging, but it does pass the "Twitter" test. Here are the current number of Twitter followers for each professional league:

Given the dominance of the NFL domestically, it's not far-fetched to believe that the NBA has broader reach outside the U.S. than the other three sports. Keep in mind that in China alone, the Chinese Basketball Association estimates 300 million people regularly play the game. Steph Curry and Under Armour are happily taking advantage of this popularity.

Later this year, Curry will travel to China and Southeast Asia to build brand awareness for Under Armour. The trip will be a repeat of last year, when over one million people tuned in to a live stream of the company's final tour in Shanghai. Under Armour also reported that it received over three billion social media impressions over a five-day tour.

Last month, Curry sustained what looked to be a serious knee injury. After receiving what was probably the most anticipated MRI in league history, Curry tweeted out that he was going to be okay. That tweet alone received over 33,000 retweets and 78,000 likes. What he did on the court two weeks later upon his return was incredible.

After struggling most of Game Four in a playoff matchup against a feisty Portland Trailblazers team, Curry scored a league record 17 of the team's 21 points in overtime. Curry led the Warriors to victory, and Microsoft co-founder and Trailblazers owner Paul Allen became a popular Internet meme with this look of astonishment during the game:

Two days later, Curry was voted MVP for the second straight year, and for the first time in NBA history, the vote was unanimous.

Sports fans can probably expect more spectacular moments from Curry as the NBA playoffs roll on. If the Warriors go on to win the NBA finals , Bay area basketball fans and Under Armour shareholders will have even more reason to smile.

Curry's success on the court has also led to success off the court. Last fall, Under Armour extended Curry's sponsorship deal to 2024. Terms of the contract weren't disclosed, but former MVP Kevin Durant's recent 10-year, $300 million deal with Nike is a good barometer.

Curry's marketability has a lot do with his records, team success, and individual accolades. However, he's also different from most popular NBA players in that he isn't a 7-foot athlete who dunks on opponents as a hobby. Hall of Fame center Shaquille O'Neal once said that Steph Curry reminds him of a "cute little baby boy" and later followed up with this statement:

I like watching Steph Curry. He's something that I haven't really seen. I really haven't seen a small guard dominate like he did. You know, [Steve] Nash did it every now and then, but Steph Curry, like, took over the game. If you look at him, I saw him a couple weeks ago in New York, and no offense to him, but he looks like a little baby. He has no arm muscles, no chest muscles.

Part of the appeal of Curry is that he is relatable. As a kid, you can dream of one day being in the slam-dunk competition, but there are two things out of their control: their height and, to an extent, athletic ability. However, with a lot of work, it's a reasonable goal to be a really good three-point shooter. Everyday fans can look at Steph Curry and see someone who looks like them, someone with "no arm muscles, no chest muscles."

Couple Steph Curry's unique game with being a model citizen, and you can see why Under Armour extended Curry's contract. Curry's importance on Under Armour's business is not lost on CEO Kevin Plank, who had this to say about its spokesman:

We're just beginning to see what partnering with the right athlete like Stephen Curry can do for our business. It's difficult to underestimate the power of having the best sell-through of any signature basketball shoe this past season. It clearly lifted our brand in the mall channel and positioned us for aggressive growth, not only in signature, but overall with this most important consumer base.

Without Michael Jordan, Nike probably wouldn't be a $100 billion business and the largest sports apparel company in the world. Under Armour hopes to be headed in the same direction with the help of Stephen Curry.