Please ensure Javascript is enabled for purposes of website accessibility
Log In Help Join The Motley Fool
Free Article Join Over 1 Million Premium Members And Get More In-Depth Stock Guidance and Research
By Brian Feroldi, Daniel Miller, and Steve Symington - May 23, 2016 at 8:36PM

Our contributors plan on holding on to these three stocks for decades.

We Fools believe that the best way to grow your net worth is to buy great companies and hold them for the ultra-long term. That's an easy enough concept to understand, but finding those great companies can be extremely difficult. For that reason, when we think we've invested in a winner, we tend to hold on tight no matter what is going on in the markets.

Knowing that, we asked a team of Foolish contributors to highlight a stock they own and never plan on selling. Read on to see which stocks they selected and judge for yourself whether they might be right for your long-term portfolio, too.

Brian Feroldi: One company I can't see myself ever parting with is IMAX (IMAX -1.36%), the company behind the supersized movie-theater screens.

With home entertainment options getting better and better each year, movie theater operators are being forced to find new ways of enticing customers to leave their couch for the big-screen experience. That's causing more and more of them to consider installing an IMAX screen to help them create a consumer experience that simply can't be replicated at home.

The company's recent results show just how much interest there is in its massive screens. IMAX signed agreements for 36 new theaters in the quarter, a 71% increase over the prior year. It also installed 19 new theaters, bringing the worldwide network up to a total of 1,066 systems, with another 388 theaters in its backlog.

That's all great, but the real reason I think IMAX's stock is so compelling is the company's business model. Rather than just making money through system installations, in recent years IMAX has shifted toward joint revenue-sharing agreements. Under these contracts, IMAX charges a lower cost up front for its systems in exchange for getting to keep a portion of box-office ticket sales. This is a win-win for both parties, as it lowers the upfront cost to theater operators while giving IMAX a chance to create a recurring revenue channel.

With demand for its systems on the rise and an ever-increasing share of revenue coming from its high-margin, revenue-sharing agreements, IMAX's business is scaling beautifully. Take a look at how its trailing-12-month margins have trended over time. 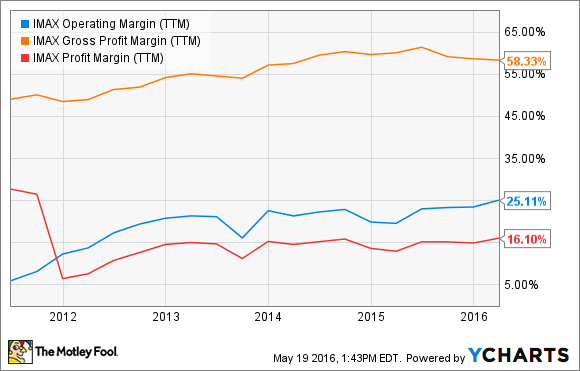 While the hit-or-miss nature of the movie business will cause IMAX's revenue and profits to vary wildly from quarter to quarter, I'm a firm believer that its top and bottom lines will push higher for decades to come. For that reason, this is one stock I plan on holding on to for a very long time.

Daniel Miller: General Motors (NYSE: GM) won't make many investors' list of stocks they would hold forever, but the company is doing a lot of things right this decade. It's drastically reduced its number of fleet sales in the U.S. and focused on more profitable retail consumers, such as with its lucrative and highly popular SUVs and full-size trucks. General Motors also took the title of No. 1-selling foreign automaker in China. The company has managed to significantly reduce costs and breakeven levels from a decade ago, and is adjusting its strategy to include a very different-looking automotive industry going forward.

While all of those factors are reasons the automaker is producing record profits, it's the future strategy that makes me willing to hold Detroit's largest automaker and never sell.

Maven is General Motors' car-sharing service, which combines multiple mobility programs under a single brand name. Maven's main goal is to provide on-demand access to a fleet of vehicles throughout selected cities. The program's pricing is simple and transparent; Chicago, for instance, has pricing starting at $8 an hour, including insurance and fuel.

In less than four months Maven has grown to five markets -- New York City, Ann Arbor, Mich., Boston, Chicago, and Washington, D.C. -- with more than 1 million miles driven. This is a futuristic strategy that will be necessary for automakers to survive and thrive over the next couple of decades. Maven also represents innovative strategy from current company leadership, that previous generations of executives would have scoffed at. Only time will tell if Maven can generate an entirely new stream of revenue for the company, but it's a growth story worth buying into.

The executives at General Motors are becoming increasingly receptive to new ideas; proved out by initiatives such as Maven, its alliance with ride-sharing company Lyft, its acquisition of Cruise Automation, and its leadership in vehicle connectivity with OnStar. GM's looking to the future, finally, and that's one reason I won't sell my stock anytime soon.

Steve Symington: I tackle every stock purchase I make with the intention of owning a piece of the business for the long term. But one company I'm confident will be a part of my personal portfolio indefinitely is Under Armour (UAA -1.50%). Incidentally, the athletic-apparel company is also one of the best-performing picks in my CAPS portfolio here at the Fool, with shares up more than 900% since I gave the stock a thumbs-up in early 2010.

As it turns out, it also seems long-term investors are being offered a golden opportunity with shares of Under Armour down around 20% over the past month. This is despite an encouraging 7% post-earnings pop in April, and after Under Armour reported its 24th straight quarter of achieving revenue growth of at least 20%. Or, more accurately, Under Armour's top line jumped 30% year over year last quarter, while operating income climbed 26%. Both figures were well ahead of management's expectations and proved enough to allow the company to increase its guidance calling for full-year 2016 revenue growth of 26%, to $5 billion, and growth in operating income of 23% to 24%, to a range of $503 million to $507 million. That said, we should also keep in mind that late last year Under Armour revealed an accelerated plan to reach annual net revenue of $7.5 billion by 2018, which would be good for another 50% increase over this year's already ambitious goal.

If that sounds like a stretch, consider that Under Armour's two best-selling online items last quarter were its Curry Two basketball shoe and $400 UA HealthBox -- novel products hailing from its burgeoning young footwear and connected fitness segments, respectively. Meanwhile, international sales still comprised only 14% of total revenue last quarter after climbing 56% year over year. So it's evident Under Armour is having no problem translating its stateside success in the performance-apparel industry to other market verticals and geographies.

In the end, assuming Under Armour can sustain this growth as planned, I think Under Armour will continue to generate market-beating returns for the foreseeable future.