Please ensure Javascript is enabled for purposes of website accessibility
Log In Help Join The Motley Fool
Free Article Join Over 1 Million Premium Members And Get More In-Depth Stock Guidance and Research
By Andrés Cardenal - May 23, 2016 at 7:28AM

Financial performance is improving at the retail behemoth, and the stock is attractively priced.

Wal-Mart Stores (WMT 0.86%) stock has delivered disappointing returns for investors lately. Shares of the retail giant are down by 10% over the last three years on the back of stagnant financial performance. On the other hand, the company announced better-than-expected sales and earnings last quarter, and the stock is still fairly attractively valued. Is it the right time to go shopping for Wal-Mart stock?

Tough times to be a discount retailer

Wal-Mart is operating in a remarkably challenging environment. The industry has always been savagely competitive, and things are now more difficult than ever for brick-and-mortar retailers because of growing competitive pressure from Amazon (AMZN 3.15%) and other online players. The following chart compares growth in U.S. e-commerce sales versus overall retail sales, and online is clearly redefining the rules of the game. 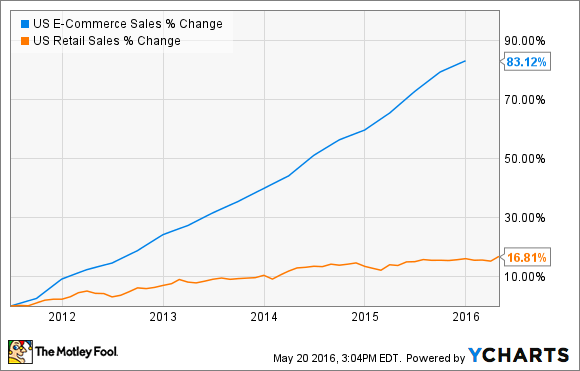 US E-Commerce Sales data by YCharts.

Amazon is expected to make $134 billion in total revenue during 2016, while analysts are expecting that Wal-Mart will generate nearly $484 billion in sales this fiscal year. This means that Amazon is less than 28% the size of Wal-Mart in terms of revenue. On the other hand, Amazon surpassed Wal-Mart in market value last year: The online retailer has a market capitalization value of $291 billion versus nearly $220 billion in market capitalization for Wal-Mart.

The main reason why investors are willing to pay such a big premium for Amazon stock versus Wal-Mart is clearly superior growth rates from the online retail powerhouse. Amazon announced a staggering increase of 29% in constant currency sales last quarter, while constant currency sales at Wal-Mart increased 4% during the first quarter of fiscal 2017.

Wal-Mart is investing for growth in e-commerce, and the company has recently announced a bold move to compete more aggressively against Amazon. Wal-Mart is launching its ShippingPass service on a full scale. The subscription costs $49 annually, and it offers free two-day shipping on all products purchased on Wal-Mart’s online platform. The service competes directly against Amazon Prime, which costs $99 per year and includes free two-day shipping as well as other benefits such as online video and music streaming.

Initiatives such as ShippingPass show that Wal-Mart fully acknowledges that it needs to accelerate online growth, and management is doing the right thing by stepping up its efforts in this crucial area. On the other hand, Wal-Mart is fighting an uphill battle versus Amazon in e-commerce, and moves like ShippingPass will probably hurt profit margins in the short term.

Time to grab some Wal-Mart stock from the shelves?

Wal-Mart has recently increased its spending in key areas such as people and technology. The company is investing nearly $2.7 billion over two years in higher salaries and better training for employees, and is already reaping some benefits from these investments, as both sales and earnings came in ahead of management guidance last quarter.

Wal-Mart has long been affected by problems related to low employee motivation and insufficient productivity, such as high employee turnover, empty shelves, and cleanliness problems. Management believes that those variables are improving due to higher salaries and better working conditions, and this is driving an improving customer experience and growing traffic.

In the words of Wal-Mart CFO Brett Biggs:

Walmart U.S. had a good first quarter with comp sales ahead of guidance,
driven by solid traffic growth. We continued to steadily execute against the plan we laid out a year ago, and we’re seeing positive results from these efforts. Our customers continue to tell us they are happy with the changes we’re making in our stores, as evidenced by our customer experience scores, which rose again this quarter versus last year.

Total revenue during the quarter ended on April 30 came in at $119 billion, a 4% increase when excluding the negative impact from currency fluctuations. Wal-Mart U.S. delivered a 1% increase in comparable-store sales on the back of a 1.5% increase in traffic during the quarter. This was the seventh straight quarter of positive comparable sales, and the sixth straight quarter of positive comparable traffic.

The company is also enjoying strong performance in its neighborhood market format, with comparable sales in this segment growing 7% last quarter. Wal-Mart is leveraging technology to expand its grocery pickup service, which, according to management, is receiving high marks from customers and will be available in 40 different markets by the end of this month.

E-commerce is still growing well below its potential, though, since Wal-Mart reported a modest increase of only 7% in constant currency e-commerce sales on a global basis last quarter. The company is broadening its online inventory at full speed. Wal-Mart already has 10 million SKUs available on Walmart.com, but this is not producing enough traction among customers so far.

An improved customer experience is driving solid top-line performance at Wal-Mart, and the company still has a lot of room for accelerating growth in e-commerce. Even if profit margins remain under pressure in the coming quarters due to increased spending, management is doing the right thing by prioritizing long-term growth over short-term margins.

Plus, Wal-Mart stock is still priced at attractive valuation levels. The retail powerhouse carries a price-to-earnings ratio around 15.1, a considerable discount versus a price-to-earnings ratio in the area of 23.5 for the average company in the S&P 500 index. As long as management keeps leading the company in the right direction and driving sustained sales growth, Wal-Mart is still offering substantial upside potential from current price levels.