Please ensure Javascript is enabled for purposes of website accessibility
Log In Help Join The Motley Fool
Free Article Join Over 1 Million Premium Members And Get More In-Depth Stock Guidance and Research
By Jay Yao - May 24, 2016 at 2:35PM

After originally planning to sell or divest the majority of those assets, management has changed its mind. Is keeping the oil and gas assets the right choice, and does that make Freeport-McMoRan a good buy?

Freeport-McMoRan (FCX -1.80%) shares fell sharply from the middle of 2014 to early February because of declining copper and oil prices. The falling commodity prices caused investors to become concerned about Freeport-McMoRan's over $20 billion in debt and prompted management to announce that it would consider separating the energy businesses from the company.

Although several months have passed since the announcement, Freeport-McMoRan hasn't separated the oil and gas business yet. Because crude prices crashed from late last year to February of this year, Freeport-McMoRan couldn't sell those assets for reasonable prices. Now that crude prices are higher, management has taken the middle-of-the-road approach. To make sure leverage doesn't hurt as much if commodity prices go down, it's cutting costs, announced plans to lay off a quarter of its oil and gas employees, and divesting some assets. To preserve upside, it's said it's going to keep many of its oil and gas assets in addition to its core copper mines. Is management's strategy a good one?

More bullish on crude than copper

By recently selling previously core copper assets such as the Tenke copper mine in Congo for $2.65 billion in cash but keeping non-core oil and gas assets, it seems that management is more bullish on crude than they are on copper. 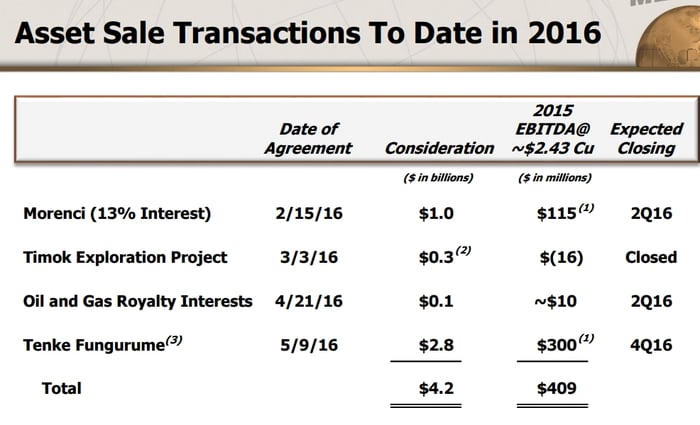 This may be the right strategy. Although copper fundamentals are favorable in the long run, the sector is oversupplied and the prospect of a rebound over the next few years is uncertain. China accounts for around half of copper demand, and China's economy hasn't shown any signs of a turnaround yet. The leadership in the country has seemingly ruled out the kind of large-scale infrastructure stimulus that would send copper prices surging. Although major copper producers including Freeport-McMoRan have announced cuts this year, the announced cuts haven't been enough to send copper spot prices sustainably higher. At the moment, copper spot prices are just 10% higher than their lows for the year.

Crude outlook is getting better

The outlook for crude is considerably better than for copper. Among the oil bulls, there is a consensus that non-OPEC production will continue to decline and everyone in OPEC except Saudi Arabia and Iran is tapped out. Iran has several hundred thousand barrels per day of production capacity left to ramp up before needing substantial Western investment to raise production higher. Saudi Arabia has spare capacity of 2 million barrels per day, with 1 million per day available immediately and 1 million per day available in six months. Some of Saudi Arabia's immediate production is spoken for, at least during summer. The kingdom's oil consumption increases by around 400,000 barrels per day every summer because it burns crude for its energy and cooling needs.

The bull thesis for crude could prove wrong just as it did in the middle of 2015. Demand could falter because of the weak global macroeconomy. Record inventories around the world could ensure crude prices stay low even with all the geopolitical disturbances that have popped up.

No one knows for sure, but there is more and more data supporting the bullish thesis and less and less data supporting the bearish thesis every day. The latest bullish data point is the Energy Information Administration's prediction of $76-per-barrel Brent prices by 2017. If that happens, Freeport-McMoRan's management will have made the right choice. The company would realize around $2.2 billion in EBITDA from its oil and gas segment versus its current run rate of $1 billion now. In addition, Freeport-McMoRan would be able to get more for its oil and gas assets if it wanted to sell at that time.