Please ensure Javascript is enabled for purposes of website accessibility
Log In Help Join The Motley Fool
Free Article Join Over 1 Million Premium Members And Get More In-Depth Stock Guidance and Research
By Daniel B. Kline - May 24, 2016 at 12:03PM

The company knows it needs an online strategy, but unlike most retailers it can take its time getting there.

Costco Wholesale Corporation (COST 1.35%) does not break out its online sales in its earnings reports, nor does the company put much focus on its website.

The warehouse club does sell things online, though a membership is still required, and it even sends regular emails to its members pushing digital deals, but building online sales has not been a priority. That does not mean the company is ignoring the changes going on in the retail world; it is simply operating on a longer timetable than many of its rivals.

CFO Richard A. Galanti explained it best in the company's second-quarter earnings call (transcript from S&P Capital IQ). He noted that Costco's leadership team thinks a lot about what can get them that extra 0.5- or 1-percentage-point growth, and that "a lot of it centers around dot-com." Yet Galanti said the company was taking a measured approach to deciding how to pursue more digital sales.

We try to not avoid it or be arrogant about it, but also recognize we try not to freak out about it. ... I really feel pretty good fundamentally about our company and what we've got going on. ... And things could change, but we're -- we'll keep trying to do a few things on the Internet more, but we're going to take it steady.

That's an unusual approach in retail, but it's not without precedent. Big Lots, Inc. (BIG -2.62%)-- a heavy discounter and not a membership club -- only recently started offering items for sale on its website. That's because, like Costco, the company views visiting its stores as an event that can't quite be duplicated online. 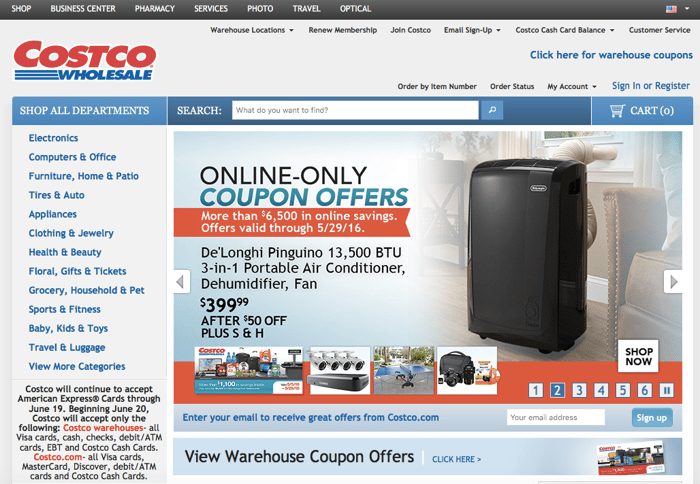 Costco has to balance its past and its future

Like Big Lots', Costco's strategy has always been to drive members into its stores. When that happens consumers spend more money, which removes the incentive for the company to consider offering some of the online consumer conveniences other retailers have.

Wal-Mart Stores, Inc. (WMT 0.86%), for example, has been testing online ordering with curbside pickup at some of its locations. This offers consumers convenience, but keeps them from actually setting foot in the store. That's good for the shopper, and might give Wal-Mart an edge over other grocery stores; it probably outweighs the impulse sales lost from a consumer who would have gone inside to shop, but instead elects to order online for curbside pickup.

For Costco, the math is not quite so simple, according to Galanti. He noted that the average Costco location has $175 million to $180 million in sales, with some doing $200 million to $300 million annually. Because of that, he implied, he's not eager to make changes just to keep up with other stores.

[W]e want to do everything possible to get them in the store and not just come and pick something up. So I don't see that as being a strategic focus of ours, at least in the near term ... also, part of the thing [is] trying to get people in the store with treasure-hunt items, with fresh foods, with gas. So we will keep driving that.

Costco is embracing the digital future

While Costco does not want to push its customers away from going into its stores, the chain is working with partners on delivery-based projects. The company does work with Google Shopping in six markets and Instacart in about 16, according to the CFO. Those partnerships do make some Costco items available for quick delivery, with no store visit required.

There are people that want things delivered to them, and we're selling them. We're selling it, but we're doing it that way. And so I think that's what we'll continue to do.

It's about knowing your brand

Costco, like Big Lots, knows its customer. As Galanti pointed out, people like to treasure-hunt in stores, looking for that big score which makes a visit successful even if the consumer had no intention of spending that much money.

We know that, compared to, let's say, an Instacart or a Google experience, the in-store visit is two-and-a-half to three times [bigger], if not a little more than that.

The CFO did acknowledge, however, that eventually a balance could be found where shoppers buy things from Costco.com more frequently, visiting stores a little less, but ultimately spending more money in total.

"We're still taking it slowly," the CFO said. Ultimately this helps the company find a digital path which does not impact its overall sales. It's a delicate balance, but one that Costco, unlike most retailers, has time to solve.