Please ensure Javascript is enabled for purposes of website accessibility
Log In Help Join The Motley Fool
Free Article Join Over 1 Million Premium Members And Get More In-Depth Stock Guidance and Research
By Jay Yao - May 24, 2016 at 2:30PM

Canada recently experienced one of its worst wildfires in history, knocking out 1 million to 1.6 million barrels of crude production per day. Here's how the wildfire affects Chevron's financials.

Canada recently experienced one of its largest forest wildfires in history. The combination of dry weather, warm temperatures, and high winds created a lethal combination that fed, and spread, the flames. At its widest point, the fire covered hundreds of thousands of acres in Northern Alberta and knocked out 1 million to 1.6 million barrels of daily crude production. Given that the fire has had a big effect on production, let's analyze how the wildfire affects Chevron (CVX 1.20%).

Chevron doesn't have much of a presence in Alberta. In terms of ownership, the company owns a 20% nonoperated working interest in the Athabasca Oil Sands Project near Fort McMurray and holds 228,000 net acres in the Duvernay shale play in Alberta. In terms of production, the oil and gas produced from the Duvernay was minimal last year, while Chevron's ownership of the Athabasca Oil Sands Project entitled it to roughly 47,000 barrels of synthetic oil per day. 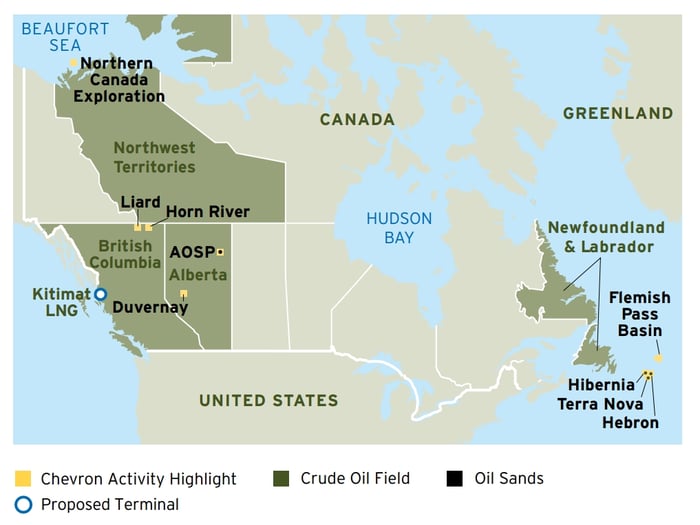 Assuming a realized price of $33 for every barrel of Western Canada select, a complete shutdown of the Athabasca Oil Sands Project would cost Chevron roughly $1.55 million of lost revenue per day. With the fire under control, workers now coming back, and the typical facility ramp-up time averaging around 10 days, the wildfire will probably affect production for 15 days and cost Chevron around $23 million in lost revenues. Because local newspapers reported that the Athabasca Oil Sands Project was still operating but at a reduced rate on May 10, the lost revenue could be lower.

For a company of Chevron's size (2.62 million BOE per day of production; $23.56 billion of revenue last quarter), the supply disruption isn't a big deal in the grand scheme of things. Because news of the fire sent Brent prices higher, Chevron might not have lost any revenues from the event when factoring in the revenue gains from the price increase. In terms of capital costs, the capital expense damage to Chevron is minimal because the wildfire is now under control and oil infrastructure wasn't damaged.

In the long run, the wildfire is unlikely to affect Chevron's investment decisions. Most people understand that wildfires of the current fire's magnitude are a one-time event, and further disruptions of that size are unlikely to occur. Given the current low oil prices, building new oil-sands facilities was already out of the question economically because the oil-sands projects aren't very competitive in terms of full cycle costs. Analysts estimate that a greenfield oil sands mine requires a WTI price of $85 per barrel or higher to break even, and a steam-assisted gravity drainage project requires WTI of $55 per barrel or higher to deliver a 10% return on investment. Further hampering oil-sands investments are the environmental concerns and the fact that it takes years to go from initial construction to production versus months for horizontal drilling in shale plays.

The fire reminds investors of the frailty of supply

Although Chevron seems fully valued because the company's stock is down 25% from its peak while Brent prices are off more than 50%, Chevron is a good long-term holding because it has a wide moat, strong balance sheet, and over a 4% dividend yield. With Brent prices near $48 per barrel and trending higher to Chevron's 2017 cash flow breakeven of $52 per barrel, the company's $1.07-per-share quarterly dividend will rapidly become sustainable. Given that crude demand is growing and non-OPEC supply is shrinking, the Energy Information Administration estimates that Brent will rise to $76 per barrel for 2017. If that occurs, Chevron will raise its quarterly dividend higher and its profits will more than justify its current valuation.