Please ensure Javascript is enabled for purposes of website accessibility
Log In Help Join The Motley Fool
Free Article Join Over 1 Million Premium Members And Get More In-Depth Stock Guidance and Research
By Beth McKenna – May 24, 2016 at 10:24AM

The entertainment giant has filed a patent for 3D printing technology that it claims is up to 100 times faster than leading technologies.

A Walt Disney (DIS -0.75%) patent application for 3D printing technology that's reportedly up to 100 times or more faster than leading commercialized technologies was published in late April. This doesn't mean the entertainment titan will develop and commercialize a 3D printer to compete with industry leaders 3D Systems and Stratasys (SSYS). However, it does suggest that Disney is exploring the development of this technology to use across its vast business empire, which could be a boon for investors.

The House of Mouse is a company built on a bleeding-edge tech foundation, so it's not surprising its 3D printing roots are wide and deep. In addition to using others' technologies, the company more recently has been developing some of its own. The patent filing for an ultra-fast 3D printing, however, is particularly compelling. 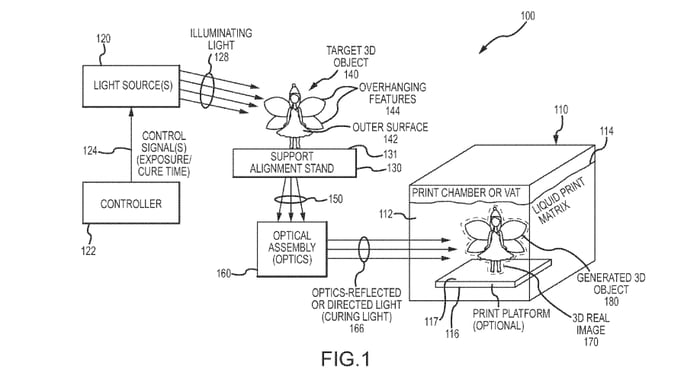 Disney's patent application, filed in October 2014, is titled "Three Dimensional (3D) Printer With Near Instantaneous Object Printing Using a Photo-Curable Liquid." Such a printer has incredible potential, because speed is one of the key hurdles holding 3D printing back from greater adoption. Materials capabilities, structural integrity, and surface quality are other primary obstacles, with their relative importance depending upon the application.

Disney's technology uses a light source to produce 3D objects from a photo-curable resin that hardens when exposed to light. In one design approach, the printer acts as a "high speed 3D copying machine" that uses an optical assembly to relay a 3D image of the existing object into a vat containing resin (shown in the above diagram). The other primary method described is used for printing objects that don't exist in the physical world or are not available for scanning or copying.

The technology Disney describes is similar to stereolithography (SLA). Unlike SLA, though, Disney's tech doesn't print an object layer by layer, as is typical for 3D printing in general, but produces the object essentially all at once -- it rises from a pool of resin. Moreover, it doesn't need 3D-printed structures to support parts of some objects to prevent them from deforming or falling off due to gravity. An example would be the outstretched arms of a figurine of a Star Wars Stormtrooper. It's the elimination of the pauses between layers coupled with not needing to print support structures that gives Disney's process its considerable speed advantage over leading 3D printing technologies.

This seems quite similar to Carbon's (formerly Carbon3D) Continuous Liquid Interface Production, or CLIP, technology. The well-funded start-up launched its first commercial product, the M1 3D printer, in April to much fanfare.

How a super-speedy 3D printing tech could benefit Disney

We can't know for sure the full range of Disney's plans for its super-fast 3D printing technology, but at least two uses seem extremely likely.

1. Movie-based "experiences" at theme parks.
Speedy printers could be used at the company's theme parks to churn out 3D-printed figurines of visitors participating in what the company calls its movie-based "experiences." In the summer of 2012, Disney offered the first such experience, called "Carbon-Freeze Me." Visitors could have their likenesses put onto Han Solo's body in the famous carbon freezing scene from Star Wars: Episode V -- The Empire Strikes Back. In a process that took only 10 minutes, the visitor was digitally scanned, and the product was at some point 3D-printed and mailed to his or her home. The next year, visitors could become Stormtroopers.

These offerings were reportedly extremely popular, despite a rather hefty price tag of $99.95. Super-speedy 3D printers would enable Disney to print these products on site and provide them to customers right then and there. The instant gratification aspect should help make these offerings even more popular, and this is just one such application for the technology at the parks.

3D printing is increasingly being used to produce costumes and props for movies, as well as theatrical productions and other live performances. This statistic shows how quickly the innovative tech has gained a foothold in the film-making space: Leading movie prop and costume specialist FBFX Ltd. last year used 3D printing on 90% of all its projects, up from just 10% three to four years ago. Not only does 3D printing cut down on lead times relative to traditional manufacturing techniques, but it also allows for the production of objects that can't be made any other way. Disney's tech could turbocharge this speed advantage. FBFX is the shop behind the props and costumes for Disney's 2014 blockbuster Guardians of the Galaxy, and it used a Stratasys Connex 3D printer to make various props, including the entire armor costume for the character Korath.

There are numerous other potential applications for super-speedy 3D printing, many within Disney's lucrative consumer products realm as well. The company can leverage this technology across its wide-reaching businesses to open up new revenue sources and increase the profitability of many revenue streams that already exist.

Beth McKenna has no position in any stocks mentioned. The Motley Fool owns shares of and recommends Walt Disney. The Motley Fool recommends 3D Systems and Stratasys. Try any of our Foolish newsletter services free for 30 days. We Fools may not all hold the same opinions, but we all believe that considering a diverse range of insights makes us better investors. The Motley Fool has a disclosure policy.