Please ensure Javascript is enabled for purposes of website accessibility
Log In Help Join The Motley Fool
Free Article Join Over 1 Million Premium Members And Get More In-Depth Stock Guidance and Research
By Brian Stoffel - May 25, 2016 at 9:56AM

After joining forces with Qunar, the company needs investors to adjust their expectations.

At one point, the Chinese online travel industry (OTA) was fairly fragmented. But last year, Ctrip.com (TCOM 1.24%) put an end to that. A strategic investment in smaller player eLong and the essential acquisition (in reality, a "partnership") of its main competitor, Qunar (QUNR), gave Ctrip a 75% market share of China's OTAs.

But even though management said the company was expected to grow revenue by 75% in the about-to-be-reported first quarter, analysts were concerned. That's because the growth was coming primarily from the Qunar acquisition, not from organic growth of Ctrip's core businesses. It didn't help when management refused to break out what the expected organic growth was -- citing the fact that Ctrip and Qunar share much of the same inventory.

With that as the backdrop, here are three things that I -- as a shareholder -- will be watching when the company reports. Note that although an exact date has yet to be given for the release, last year's first quarter report came out mid-May.

Did the company meet revenue expectations?

Normally, as a long-term investor, I wouldn't worry too much about companies meeting such short-term figures. But because of the acquisition of Qunar, I think it'll be important for investors to gauge how the pieces of this now-larger company are fitting together.

Officially, the company expects to bring in between $610 million to $630 million in revenue. Usually, I focus on the growth in total bookings volume for both accommodations (mostly hotels) and transportation (airline, train, and bus), but those numbers are likely to be skewed higher in this larger enterprise.

One of the key benefits of consolidation among Chinese OTAs is that price wars are coming to an end. Ctrip had to endure a difficult three years prior to 2015 that saw gross margins plunge as competitors attempted to steal business away -- at a loss -- by offering up cheaper hotel and airline tickets.

Here's a look at how gross margins have fared since they topped out in 2010. 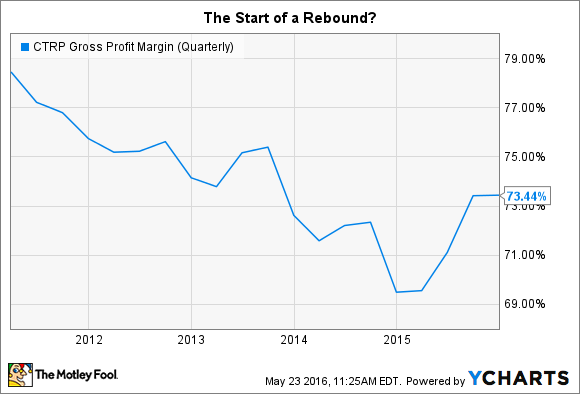 After falling for four consecutive years, gross margins showed signs of expansion in 2015. With CEO and founder James Liang indicating that some "rationality" was once again being practiced in terms of pricing in the Chinese OTA market, I hope to see continued improvement in gross margins during the quarter.

One of the not-so-great things about acquisitions is that you acquire all of a company's baggage along with its business. Qunar's biggest piece of baggage is a terrible relationship with some of the biggest airlines in Asia, including Air China, Hawaiian Airlines' Hong Kong Airlines, and China Eastern Airlines. Because of various disputes, all three of these companies refuse to list on Qunar's portal.

At the time of the acquisition, all three had good relationships with Ctrip and continued to list on Ctrip's site. But there's always concern that with Ctrip and Qunar being so closely tied together, the airlines could revolt.

In late April, China Eastern and Ctrip went public with a "strategic collaboration" that should ease some fears. However, it will be important for investors to monitor relations with Air China and Hong Kong Airlines to make sure they remain healthy.

Surely, this should make for an interesting report and conference call as investors try to understand what this newer, larger, and more dominant Chinese OTA is really capable of.