Please ensure Javascript is enabled for purposes of website accessibility
Log In Help Join The Motley Fool
Free Article Join Over 1 Million Premium Members And Get More In-Depth Stock Guidance and Research
By Daniel B. Kline - May 25, 2016 at 1:19PM

Both retailers face not only profit challenges but threats to their very survival.

While both are retail names with a ton of tradition behind them, both J.C. Penney (JCPN.Q) and Macy's (M -6.60%) have struggled in recent years.

In some ways picking between them is like deciding to bet on a horse that's recovering from a broken leg over one whose walk makes it clear a snapped limb is imminent. Both companies are in different stages of dealing with the same problem, that the Internet has made physical stores less necessary.

Deciding which of these chains to buy is really a question as to whether you believe either one has a long-term future. 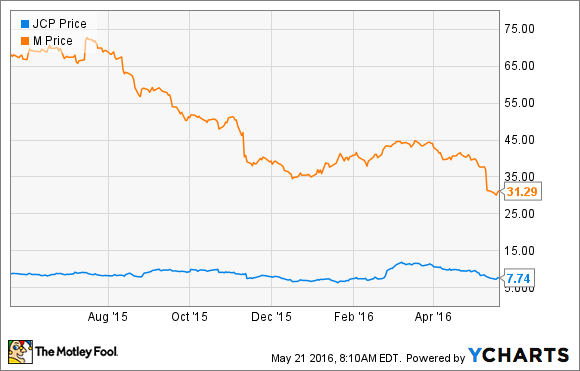 Macy's shares have been on a downward trend while J.C. Penney has perked up a little over its 12-month lows. Image source: YCharts.com.

The case for J.C Penney

While you could argue that Macy's is in the early days of its tailspin, J.C. Penney has been pushed to the brink and fought back from the edge. The chain saw its sales devastated by former CEO Ron Johnson, who did away with discounts and abandoned many of the retailer's familiar features. Under the one-time wunderkind the chain saw its sales dip from $17 billion to $11 billion as it was forced to fire 40,000 employees while shedding assets to have enough cash to stay open, according to Fortune.

Since Johnson's firing in April, 2013, things have gotten a little better. First former CEO Myron Ullman was brought back to right the ship and now former Home Depot executive Marvin Ellison holds the job. The two have been able to undo a lot of Johnson's damage even though it has not come all the way back.

In 2015, the retailer reported $12.6 billion in sales up 3% from $12.3 billion the previous year and comparable store sales rose 4.5 % for the year. The company still lost money but its adjusted net loss improved $463 million to $315 million. Sales slipped a bit in Q1 dropping by 0.4% on a comparable stores basis, but the company still forecasts positive adjusted earnings per share.

In addition to its impending prediction of a return to profitability, J.C. Penney has another initiative which might cheer investors. The company has expanded a pilot program selling appliances from just a few stores to about 500 of its locations. That gives the chain a line of products which has proven Internet-resilient operating in many markets abandoned by its longtime rival Sears. It's too early to know how this experiment will contribute (or detract) from the bottom line, but early results have been positive.

An argument for Macy's

Macy's has never been in the near-death position J.C. Penney found itself not-so-long ago. In fact the company even turned a profit in 2015 earning $3.77 per diluted share after excluding $288 million ($184 million after tax or 55 cents per diluted share) of impairments, store closings, and other costs. That's down from $4.40 the previous year (factoring in similar exclusions) and sales did drop 3.7% for the year and 5.3% in Q4.

These were disappointing numbers, but hardly sky is falling stuff. It's the trend however that has troubled investors as Q1 numbers showed a further drop with EPS coming in at $0.37, down from $0.56 the previous year. Sales fell as well dropping by 7.4% though some of that comes from the chain closing stores.

It's a downward spiral which the company has openly discussed.

"We are seeing continued weakness in consumer spending levels for apparel and related categories. In particular, our sales trend relative to expectations meaningfully slowed beginning in mid-March, and first quarter results are below our original outlook," said CEO Terry J. Lundgren in the Q1 earnings release. "Headwinds also are coming from a second consecutive year of double-digit spending reductions by international visitors in major tourist markets where Macy's and Bloomingdale's are key destinations, as well as a slowdown in some center core categories -- further intensifying the challenges associated with growing topline sales revenue."

Essentially things are not great and there's reason to expect they're going to get worse. Macy's does have "a plan for near-term improvement," but there are a lot of factors pulling it down and it's hard to to see a quick fix to the idea that consumers are less likely to shop in stores.

Which chain is a better buy?

Macy's still has a way to fall while J.C. Penney may mostly have bottomed out. Neither chain offers huge growth opportunities -- it's more about survival at this point than success, but for the next few years J.C. Penney may see its stock rebound simply because it already appears to have found a formula for success.

Macy's has some runway, more than J.C. Penney did at its worst moments, but it's going to be a long ugly ride. Both of these chains could ultimately succumb to changing shopping habits or exist in very different forms a decade from now, but for the next few years, if you had to buy shares in one, J.C. Penney has more upside.