Please ensure Javascript is enabled for purposes of website accessibility
Log In Help Join The Motley Fool
Free Article Join Over 1 Million Premium Members And Get More In-Depth Stock Guidance and Research
By Reuben Gregg Brewer - May 25, 2016 at 8:17AM

Which is better: Safety or rebound potential?

Teck Resources Ltd (TECK -2.58%) and Cliffs Natural Resources (CLF 2.54%) have both been hit hard by the commodity downturn that started in 2011. Now that things are starting to look a little brighter for the mining industry, you might be eyeing this pair and wondering which is the better buy. Although the answer isn't an easy one, I think one of these two miners stands out.

The big problem for Teck and Cliffs has been on the steel side of the equation, with the price for iron ore, Cliffs' big product, and metallurgical coal, one of Teck's largest commodity offerings, both falling as an oversupply of steel flooded the market. The issue was that a lot of the world's steel, from China and other countries, found its way to the relatively strong demand in the United States. Both Teck and Cliffs have big operations in North America, so the U.S. steel industry is a key customer.

The weak steel market put both companies into damage control. Cliffs, for example, wound up selling assets (like its coal business), trimming costs, and working hard to reduce debt. Teck has been similarly focused, trimming costs and shoring up its finances so it can continue to build out an expensive new oil sands project it's working on.

That's the quick back story. Both are in a better position today. But Teck looks like the better company overall. 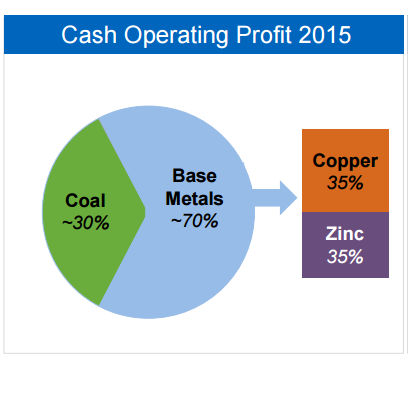 One of the first reasons to like Teck is its diversified business. Yes, it is a miner and steel-making coal is one of its main products. But metallurgical coal only accounts for about 30% of its business (it was a bigger contributor when met coal prices were higher). The rest is split fairly evenly between zinc and copper, commodities that were also hit during the broad mining downturn. But these additional businesses mean that there's more backing Teck's future than just the steel market. Cliffs' future, on the other hand, is tied to iron ore, both domestically and in the Asia-Pacific region. That makes it a one-trick pony even if it has operations in multiple parts of the world.

And while the cost of Teck's Fort Hills Canadian oil sands development caused investors a little consternation during the protracted commodity downturn, it currently looks like Teck will have no problem paying for the mine. At the end of the first quarter, the company had roughly $1 billion more to pay for the project, but $1.3 billion in cash on hand and another $3 billion or so on an undrawn credit facility. That's plenty of liquidity to get the dig done.

And once the oil sands project is up and running, it will add a fourth major commodity to Teck's portfolio. That will further diversify the miner's business. Oil's recent price strength, after a steep price decline, is helpful, too, since it's making the project look less like an expensive mistake and more like a long-term opportunity again. 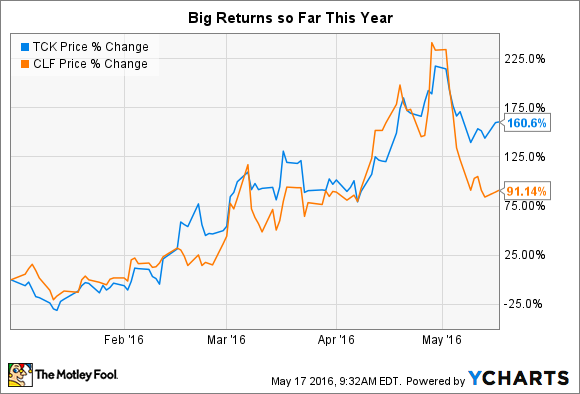 That said, Teck is clearly shifting further and further away from the steel market. It isn't leaving the industry behind, but it isn't going to be as reliant on it as it once was, either. From a diversification standpoint, that's good, and conservative investors should favor Teck over Cliffs for that reason. To put some numbers on the benefits of Teck's diversification, while both Teck and Cliffs bled red ink last year, Cliffs' bottom line has shown a loss in three of the last four years. Teck's loss in 2015 was the only time it lost money in the last decade. If you like to sleep well at night, Teck is the standout.

That doesn't mean that Cliffs is a horrible company. In fact, if you are an aggressive investor looking for a focused bet on iron ore, you'll probably prefer Cliffs. But you'll have to watch the steel industry like a hawk because that's the main -- pretty much only -- driver of Cliffs' top and bottom lines. That's a lot of risk to take on since the steel industry is still struggling with too much supply. Only investors willing to shoulder a heavy dose of uncertainty should jump aboard. Essentially, Cliffs is a speculative bet on a steel market upturn.

Whether Cliffs or Teck is right for you depends on what you are a looking for. But if you want to own a well-diversified miner building its business for the future, Teck is clearly the better option.