American Water Works stock has been soaring. Can it continue to outperform? Two Fools square off.

American Water Works (AWK 3.13%) stock has returned 40% over the past year, leaving all wet the S&P 500's return of negative 1.4%. The company is the largest investor-owned water and wastewater utility in the United States, providing services to approximately 15 million people in 47 states and one Canadian province. It mainly operates as a regulated utility but also has a market-based business, which primarily builds, operates, and maintains water systems for military bases, municipalities, and industrial customers.

Will American Water Works keep spouting off solid returns or is the faucet going to shut? Two Fools lay out the bull and bear arguments. 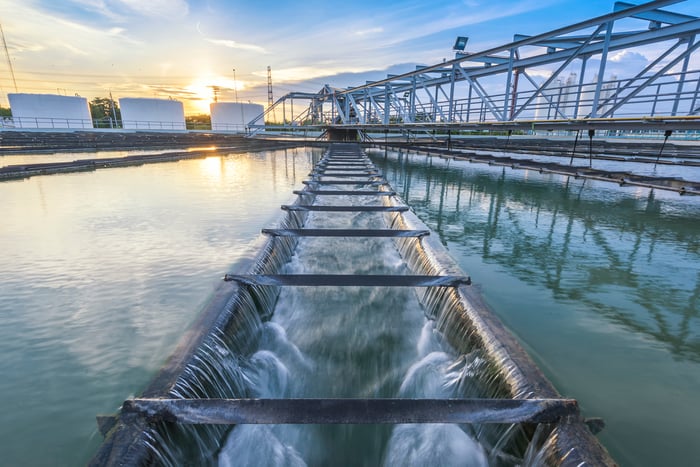 Beth McKenna: I'm bullish on American Water Works stock over the medium to long term -- five or more years out. I'll concede there could be some rough seas over the shorter term. The stock's huge price run-up over the last year – 40% for a utility! -- isn't justified by the company's financial performance or near-term outlook, so it's quite overvalued. Much of this rise is due to investors' flight to safety in a tough market, in my opinion, with the extremely low interest rate environment acting as a longer-term tailwind. The Flint, Mich., water-system crisis earlier this year also likely provided a bit of hydraulic force to water stocks in general.

Why do I like American Water Works stock as a medium- and long-term investment?

First, this company supplies the world's most essential product, which insulates it as much as possible from factors such as economic downturns to consumers' changing tastes. So it's in the right business. Its industry-leading size and geographic diversity provide it with a significant competitive advantage over its peers. Its size provides it with the resources to acquire smaller companies in what's an extremely fragmented industry. It funds these acquisitions – and its very dependable dividend – from the predicable cash flow generated by its regulated business.

American Water is by far the most geographically diverse water utility. It operates in 47 U.S. states and one Canadian province, operating as a regulated utility in 16 of these states. By contrast, the industry's second largest player, Aqua America (WTRG 3.47%), operates in eight states. This geographic diversity enables the company to grow more cost-effectively -- it can often expand without adding new management teams. Moreover, this feature makes it less vulnerable to regionally focused conditions that could adversely impact water utilities, such as droughts and unfavorable changes to the regulatory environment.

The company's market-based business provides it with more profitable growth potential. Plenty of opportunity exists here because municipalities are increasingly contracting out the operation and maintenance of their owned water systems.

As mentioned in my opening, the stock is currently overvalued. However, I still believe most investors should begin dollar-cost averaging into a full position. (Just don't plunk down your entire investment now!) That's because it's notoriously difficult to time the market.

Rich Smith: Let's start off with a point we can both agree on. If we're talking "five or more years out," I might be willing to invest in American Water Works myself -- sometime in the distant future.

After the stock's recent 40% run-up, shares of American Water Works sell for the princely sum of 27.6 times earnings. Analysts  who follow the stock, however, are only predicting 7.3% annualized earnings growth for the company over the next five years. Add the stock's 1.9% dividend yield, and you're only looking at a total annual return of 9.2% on a 27.6 P/E stock. The way I look at things, that works out to a 3.0 total return ratio (P/E, divided by the sum of the growth rate and the dividend yield) -- and it's about three times more than I like to pay for stocks in my portfolio.

And that's the good news.

The bad news is that the growth rate analysts are predicting for American Water Works could prove over-optimistic. Predictions for this current year, for example, call only for 6.8% earnings growth -- and last quarter, American Water Works grew earnings a bare 2.5%. So you might want to "soften" those water-profit growth predictions with a few grains of salt.

And all of that is before we even get to my reservations about the company's free cash flow (just $10 million generated over the past 12 months, according to data from S&P Global Market Intelligence -- barely 2% of reported net income), or its massive debt load -- $6.7 billion net of cash on hand.

American Water Works may very well be the best alternative in a badly overvalued industry. But that still doesn't make it a good investment.