A company that has a long history of annual dividend increases behind it is giving a signal to the market. It's a pretty simple one, too: Management and the board like the prospects for the company. Basically, a board doesn't raise a company's dividend year in and year out unless it thinks the company can sustain the new payout. So I'm always on the lookout for dividend hikes. Here are five companies with a history of annual increases that last increased their dividends in June of 2015 -- which means these are five stocks that could raise their dividends very soon.

The first company here has an impressive history of annual dividend increases... National Fuel Gas (NYSE:NFG) has hiked its annual disbursement for an incredible 45 years. It last increased its dividend in June 2015, so if history is any guide, you should be on the lookout for another increase announcement soon. 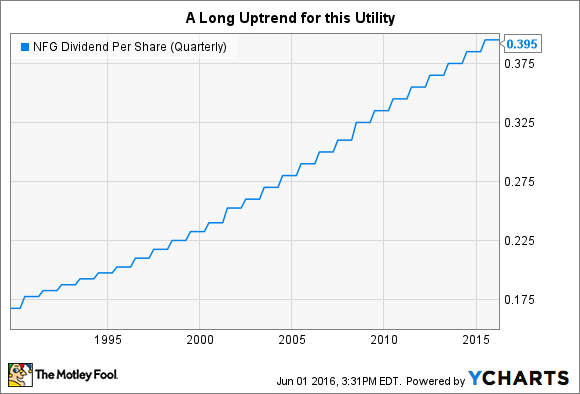 National Fuel Gas has a 2.9% yield. It operates natural gas and oil assets across five business segments, including exploration and production, pipeline and storage, gathering, utility, and energy marketing.

Although getting past 25 years of dividend hikes shows a real commitment to annual increases, it's still pretty impressive when a company gets up to, and beyond, the decade marker. That's the level FedEx Corp. (NYSE:FDX) has achieved with its 14 annual increases and its most recent hike roughly a year ago. The dividend won't make you rich, though, since the yield is only around 0.6%, but that may not be an issue for more growth-oriented investors.

The company probably doesn't need much of an introduction, but it's a global leader in the package delivery market. About 60% of revenue comes from its express service, which focuses on speedy delivery, and nearly 30% comes from delivering less time-sensitive items, with less-than-truckload delivery and services pitching in to fill out the rest of the top line.

The next trio of companies that could increase their dividends soon have annual streaks between five and seven years. That's enough history to suggest they are looking to keep rewarding investors this year, too. And since Franco-Nevada Corp. (TSX:FNV), HollyFrontier Corp. (NYSE:HFC), and Primoris Services Corp. (NASDAQ:PRIM) last increased their dividends about one year ago, you should be looking for hikes from them. That said, this group really needs to be broken into two different camps: waiting for June and waiting for later in the year.

Franco-Nevada is a gold and precious metals streaming and royalty company in the "waiting for June" camp. It has seven years of annual hikes behind it, impressive considering the commodity downturn since 2011, and it also usually announces an increase in June. Watch this 1.3% yielder, as it gets ready to announce quarterly results.

HollyFrontier and Primoris Services both have five-year streaks going. Both last announced dividend increases in June 2015. That said, each has already announced its June dividend, and neither of them increased. At first glance, you'd assume the streak is dead, but maybe not. Although the recent past suggests June for each of them, they have both increased at different times in the year before. So, they're both worth keeping an eye on -- just in case. They yield 4.5% and 1%, respectively.

HollyFrontier is an independent petroleum refiner with operations in the mid-continent, southwestern, and Rocky Mountain regions of the United States. It produces and markets gasoline, diesel, jet fuel, asphalt, and specialty lubricant products, among other things. Primoris is a construction service company providing construction, fabrication, maintenance, replacement, water and wastewater, and engineering services to public utilities, petrochemical companies, energy companies, and municipalities. It operates in the U.S. and Canada.

It's really nice to see a company that increases its dividend year in and year out. And there's every reason to believe National Fuel Gas, FedEx, and Franco-Nevada will be announcing dividend increases very shortly. Look for those. That said, HollyFrontier and Primoris both show that dividends don't always get raised with such regularity, even though it's still worth watching the pair since they haven't always followed a strict calendar on hikes.

But if you, like me, believe dividends make a clear statement about a company's future, you'll want to watch these five stocks that could raise their dividends any day now. The story this seemingly simple gesture tells can be enlightening.