Ryan Vanzo
(RyanVanzo)
Author Bio
I've had a deep passion for financial markets since childhood and will discuss almost any topic, so don't get me started. I have a Finance and Accounting degree from Bentley University and have worked for multiple mutual funds doing fundamental research.

Since then, the company has rewarded shareholders with mounting cash flows, growing dividends, and massive share repurchases. With $2.1 billion in EBITDA last year, Agrium was able to return over $1 billion to shareholders through buybacks and dividends, nearly 10% of its market cap. Since 2013, it's roughly doubled its free cash flow generation.

With multiple secular tailwinds behind it, this could be just the beginning.

Agrium has built a unique business in what historically has been a volatile agricultural commodities market. Many of Agrium's competitors are reliant on a single product source that constitutes a majority of sales. For example, a large majority of both PotashCorp (NYSE:POT) and Mosaic Co.'s (NYSE:MOS) sales come from potash alone.

Agrium, meanwhile, is much more diversified, with no single product constituting a majority of sales. In 2015, earnings were split fairly evenly between nitrogen, potash, crop-protection chemicals, and other nutrients. The company also has exposure to seeds, phosphates, and other services.

Since 2008, potash prices have fallen by over 50%, pushing most producers close to breakeven territory; PotashCorp posted a $1.2 billion profit last year, its lowest in over five years. Accordingly, shares of less diversified agricultural input producers fell by 60% or more. Agrium, meanwhile, saw its net income grow to $988 million from $798 million a year before, pushing its stock price to new highs. The company benefited from strong earnings in crop protection chemicals, seeds, and high-margin agricultural services. Agrium's diversified portfolio makes it the largest global retail distributor of crop inputs in an industry where scale matters. The company has over 1,500 retail and wholesale locations spread across both Canada and the United States. It also has a sprawling network through some of South America and most of Australia. These locations are able to offer crop inputs and services for over 50 different crops.

This network is a unique advantage; fertilizer production peers such as PotashCorp and Mosaic lack an existing retail distribution network. Whereas Agrium management has observed peers spending a significant amount of capital to build new distribution centers, Agrium can rely on its industry-dominating connection of existing infrastructure to serve customers faster and more fully.

Sustaining capital expenditures are expected to fall from a 2014 high of $2 billion to just $550 million next year. This situation should open up an additional $1.5 billion in additional cash flow to be doled out to shareholders.

In the U.S. retail market, Agrium has a leading market share of 17%, with the nearest competitor coming in at only 7%. The company's international operations have even greater market shares closer to about 30%.

While Agrium is the clear market leader, there are still significant opportunities for the company to grow both organically and through acquisitions. For example, 30% of the U.S. market is serviced through small, independent providers. Another 25% is serviced by farmer co-ops. This means that over half of the market could benefit by connecting to Agrium's sprawling, full-service retail locations.

Agrium has also been able to buy a significant amount of smaller competitors, unlocking value by connecting them to its existing distribution network. Since 2010 the company has purchased 272 locations, adding $1.7 billion in sales and $174 million in EBITDA. 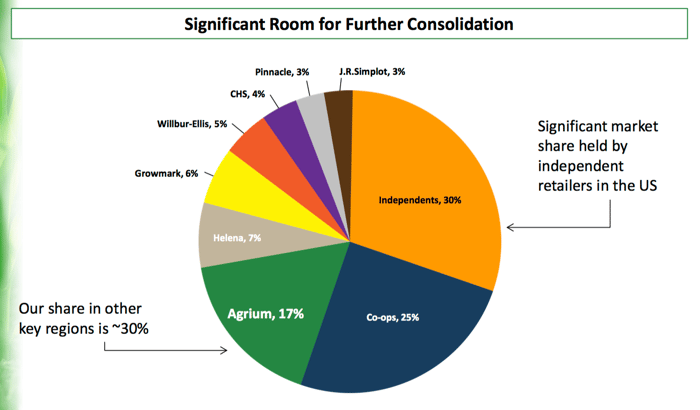 Just the beginning
All of the benefits Agrium currently enjoys should only strengthen in the coming years. The company has plenty of room to continue consolidating the fragmented retail market, adding to its leadership position. Meanwhile, demand for crop nutrients has never been higher, and Agrium's diversified model mitigates the effect of price swings in any one commodity.

Long-term investors of any style should view Agrium as a strong option. Mounting free cash flows should allow for consistent dividend increases, while growth tailwinds and share buybacks should continue to grow earnings per share for years to come.