If beauty is in the eye of the beholder, then "cheap" surely lies in the judgment of the investor.

Some stocks that trade at an extremely low multiple of earnings can be thought of as undervalued -- meaning the market has yet to realize their potential. Shares of other publicly traded companies can be "cheap" for good reason and in many instances are best avoided.

Let's evaluate two very different stocks linked by the commonality of modest valuations: Ship Finance International Limited (NYSE:SFL), and El Pollo Loco Holdings Inc. (NASDAQ:LOCO). In both cases, the virtue of being cheap may indicate inherent value you can take advantage of.

The vagaries of trade on the high seas

Ship Finance trades at a forward one-year price-to-earnings ratio of just 6.70. The current price sits at around $15.40 per share. That's about double the historical low the stock hit during the financial crisis of 2008-2009, and one-half of the company's all-time high of just over $31 per share, achieved in 2007.

Investors are cautious over Ship Finance, as two primary business lines, oil exploration and dry bulk shipping, have decelerated because of the impact of lower oil prices and a weakening global economy, respectively.

Day rates paid for deepwater drilling rigs have declined because of the glut of oil on the market. Ship Finance has countered this decline by easing the leverage associated with its offshore rigs. The company has reduced borrowings of approximately $2 billion associated with its largest rigs to $1 billion. Ironically, oil prices are helping to boost the company's tanker revenue, as the oversupply of oil causes fuel traders and purchasers to use floating ocean tankers as temporary storage facilities.

As commodity demand orginating from China has evaporated, dry bulk shipping rates have plummeted. The Baltic Dry Index, which measures the cost of shipping commodities over major sea routes, dropped to a historic low of 291 in February. The index has recovered since then, hitting a recent level of 610 this month.

While this subsector may continue to remain soft over the next several quarters, a recent snapshot of Ship Finance's revenue indicates that among major business lines, it has the least exposure to dry bulk commodity fluctuations:

Ship Finance has also worked to trim its overall debt position. Over the past five years, the company has cut its debt-to-equity ratio nearly in half, to 1.34, although that's still above an optimal level of 1.0 or below. In the first quarter of the current year, the shipping specialist continued to reduce borrowings, redeeming $125 million of outstanding convertible bonds.

One of the enticing aspects of investing in Ship Finance is the company's ample dividend, which currently yields 11.5%. The payout ratio on this dividend is quite high, at nearly 81% of corporate net income.

However, this ratio peaked at over 150% two years ago and is heading back toward a historical level of near 60% as the company pays down its debt obligations and continues to stabilize cash flows thanks to a healthy amount of contracted revenue. As of Q1 2016, Ship Finance boasts $4.2 billion in forward contracted revenue, with an average weighted contract length of nine years. For context, the company booked $407 million in operating revenue last year.

Though concerns over global economic conditions that influence the shipping industry's immediate prosperity hurt Ship Finance's valuation, it's nonetheless a conservatively run company that is structuring itself to weather the cyclicality of the ocean transport trade.

The following chart offers perhaps the best investment case. For those who have simply reinvested the company's generous dividend, Ship Finance has quietly returned an eye-opening 24% annually since the company's spinoff 12 years ago: 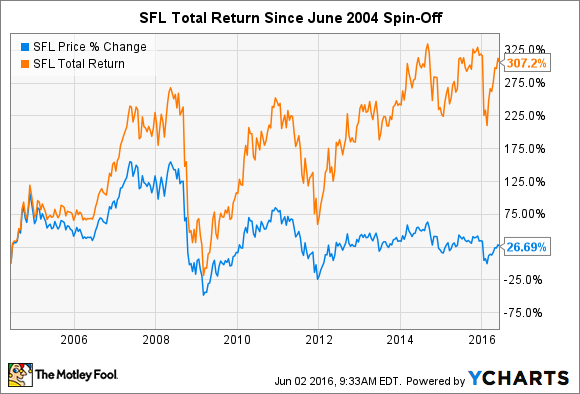 Would investors be "loco" to consider these shares?

El Pollo Loco trades for just 14 times one-year forward earnings, which is extremely inexpensive compared with peers in the fast-casual industry such as Zoe's Kitchen Inc. (NYSE:ZOES), which sells at 148 times forward earnings, and Shake Shack Inc. (NYSE:SHAK), which sports a forward P/E of 68.

Of course, Zoe's and Shake Shack have something investors have found lacking in El Pollo Loco, and that's appreciable revenue growth. Let's review a few figures from the first quarter of 2016 for each of these three companies:

Still, El Pollo Loco has undoubtedly stagnated as of late, and it shows in the paltry 0.7% comparable-store sales growth achieved in its most recent quarter. The company should be raising comparable sales at least within spitting distance of its competitors.

Management's solution to driving comps is twofold. First, the company is intensifying its marketing. El Pollo Loco named a new marketing agency of record, Harmelin Media, in April. The restaurant franchise will begin ramping up direct mail as well as radio and digital advertising, and it even intends to tweak external store signage, with the goal of better educating customers about its menu.

The chain has also begun testing a mobile app that will form the basis for a digital platform to more directly engage customers and build loyalty. Management has indicated that the app will move out of beta to a formal launch in 2016.

El Pollo Loco would gain much momentum from these efforts to improve comps, as it's already increasing its location count at a fairly brisk clip. While Zoe's and Shake Shack will each grow their total restaurant bases by roughly 13% through the next three quarters of this year, El Pollo Loco's pace isn't that far behind for a company that's much older. If it hits the top of its projected store opening range, El Pollo Loco will expand its store base by about 7% through the next three quarters of 2016.

Having lost 53% of its value since its IPO, El Pollo Loco has the market dismissing and discounting it, even though it tends to exhibit higher profitability relative to its peers. However, its revenue issues aren't unsolvable, and while it doesn't sport Shake Shack's 43% growth rate, it's capable of faster top-line improvement and deserves a higher multiple. In other words, El Pollo Loco is cheap, but it's also very likely undervalued.