Please ensure Javascript is enabled for purposes of website accessibility
Log In Help Join The Motley Fool
Free Article Join Over 1 Million Premium Members And Get More In-Depth Stock Guidance and Research
By Reuben Gregg Brewer - Jun 5, 2016 at 7:33AM

It's hard to find a good company with a decent yield, but we've found five for you to consider buying.

I'm a huge fan of dividends, and I assume if you're reading this you are, too. The problem today is that with interest rates so low, investors have bid up the stocks of dividend-paying companies in a desparate search for yield and, as you might expect, it's now hard to find a stock with a decent yield. But that doesn't mean you can't. You just need to be willing to look at sectors that are -- let's be polite -- out of favor. Here are five stocks yielding more than 3% that are worth a deeper dive right now, even though they may operate in unloved sectors.

If you're going to look at out-of-favor companies, why not start with mining -- perhaps one of the most hated industries today. There have been so many dividend cuts in that sector, you'd be right to be a little fearful -- and that's why Caterpillar Inc. (CAT 3.82%) is a better call. This heavy-equipment giant sells its massive trucks and equipment to the mining industry, among others, and has seen orders fall right along with commodity prices. Investors have taken notice and sent the shares lower.

However, Caterpillar's 4.3% yield is backed by over 20 years of annual dividend increases. And the company is expecting earnings to be around $3 a share this year. If you pull out one-time charges, that figure jumps to $3.70 or so. Since the one-time items are restructuring costs, they really should be, you know, one-time costs, and, more important, they'll set the company up to better handle the current downturn. There's risk here, to be sure, but Caterpillar is still deeply in the black despite the tough market environment, and that says a lot about the company's strength and its future when the mining markets finally start to pick up again.

Another interesting area to look for income right now is in the out-of-favor oil patch. One of the best-run oil majors is ExxonMobil (XOM 1.98%). The company's yield is kind of low for the sector, at about 3.3%, but that's because investors have been willing to pay up for quality. Exxon has long been atop the industry when it comes to return on invested capital, meaning it does a better job of putting shareholders' money to work. Then there's the not-so-subtle accomplishment of more than 30 years of annual dividend increases. In other words, Exxon has increased its dividend in good years and bad, including through the current downcycle. And while many competitors are bleeding red ink today, Exxon is still in the black. 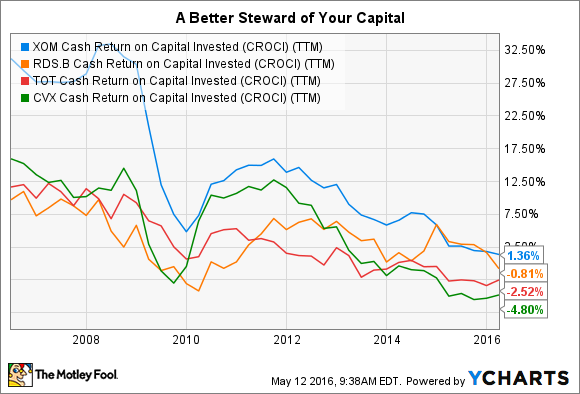 Another option is Chevron (CVX 1.64%). Although it's not quite as good a choice, it's still a well-run company. The yield is a bit higher at 4.2%. The problem here is that Chevron recently bled a little red on the bottom line (it's lost money in each of the past two quarters) and hasn't increased its dividend in eight quarters. That means its 28-year annual increase streak could be nearing an end. But that's a far cry from a cut, and you might be willing to suffer through a period of no dividend growth for the higher yield. In case you're still worried about a dividend cut -- and there's reason to be -- management has been vocal about preserving the dividend during this downturn.

With both Exxon and Chevron you have to be willing to handle the inherent volatility involved with commodity prices. That might be too much to bear for some investors, in which case you're better off putting your money elsewhere.

But if you're willing to look at Exxon and Chevron, you might also want to examine refiners Phillips 66 (PSX -0.23%) and Valero Energy Corp (VLO -0.57%). These companies take oil and natural gas and turn them into other products, such as gasoline and chemicals, among many others. They yield around 3.2% and 4.3%, respectively. These are both well-run refiners, and they've each benefited from the fact that their input costs are historically low because of the fall in oil and natural gas prices.

The upshot is that both companies saw relatively weak results in the first quarter, but both remained well in the black. Valero earned $0.60 a share and Phillips 66 earned $0.72 a share. That compares to quarterly dividends of $0.60 and $0.63 per share, respectively. So they appear to be doing fine, and still covering their distributions, despite a tougher operating environment. Although those numbers may look tight, remember that dividends come out of cash flow -- not earnings.

In the end, despite the headwinds, both companies are still worth looking at. However, don't feel you have to jump right away. Margin pain might lead to lower prices. Valero, for example, is down about 20% or so this year. You might find that a good buying opportunity is starting to present itself.

There's always a trade-off between risk and reward when it comes to investing in stocks. In the low-interest rate environment we live in today, you may find yourself drawn to riskier and riskier companies in your search for a decent yield. However, Caterpillar, Exxon, Chevron, Phillips 66, and Valero all show that you can still get a decent yield from industry-leading companies. Sticking with quality names in out-of-favor sectors is a better bet than reaching for yield with weaker names. Maybe all these stocks aren't buys for you, but these five stocks with yields over 3% are all worth a deeper dive if you're looking for dividend income today.