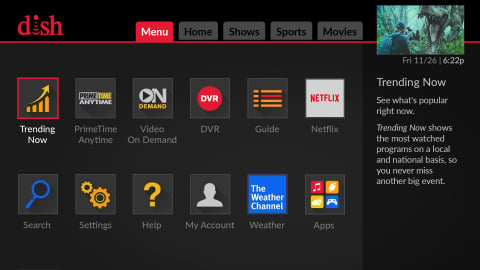 It was a good week for DISH Network's (NASDAQ:DISH) shareholders. The country's second largest satellite television provider moved 11% higher on the week, fueled by an expanded content agreement and an encouraging analyst update.

DISH Network's streaming television service -- Sling TV -- expanded its partnership with Zee Entertainment, renewing 10 existing channels and tacking on 27 more. Zee has tried to market its channels in a wide range of foreign languages as a direct-to-consumer service, but it's now trying to transition its viewers to Sling TV.

Nine of the new channels will also be carried on DISH Network's namesake satellite platform. However, the deal with Zee is ultimately about broadening the reach of its disruptive Sling TV service to U.S.-tethered expatriates hungry for video content in Arabic, Bengali, Bhojpuri, Hindi, Marathi, Oriya, Portuguese, Rajasthani, Spanish, Tamil, and Urdu.

The skinny bundle is putting on weight, and that's not a bad thing. Sling TV offers a growing catalog of channels for as little as $20 a month. It seems peculiar that DISH Network would champion the streaming television niche that's threatening traditional cable and satellite television, especially since DISH Network's flagship service is so much more expensive and lucrative than Sling TV. However, there's an important lesson that has worked for forward thinkers willing to burn their boats to conquer new land: disrupt or be disrupted.

DISH Network is right to be thinking outside of the box. Millennials are cutting the cord, and that finds it following the lead of its larger rivals in struggling to keep high-paying subscribers around. DISH Network had 13.874 million Pay-TV subscribers at the end of March, fewer than the 14.013 million that it had a year earlier. That metric is made worse by knowing that DISH Network lumps its Sling TV subscribers in that tally.

Average revenue per user is inching higher and churn is holding steady, but there's a reason why DISH Network's larger peers have merged with telco giants or acquired popular networks. DISH Network is holding up well in this iffy climate, and as a willing disruptor it's hard to bet against it even when its financials are in a state of merely meandering.