Please ensure Javascript is enabled for purposes of website accessibility
Free Article Join Over 1 Million Premium Members And Get More In-Depth Stock Guidance and Research
By Daniel B. Kline - Updated May 30, 2018 at 2:02PM

Costco ( COST 0.65% ) members join the warehouse club for a variety of reasons. Some people carefully shop across all the aisles, looking for bargains, while others focus solely on food or even outliers like hearing aids, eyeglasses, tires, or travel deals.

The chain gives people a lot of reasons to spend $55 each year for its "Gold Star" membership, but it's possible that all those other areas of potential savings don't matter if you just buy one thing regularly from the retailer. If you join Costco and take advantage of its on-site gas stations, that alone may be worth the price of joining, depending on how much gas you buy, if the Costco station is convenient for you, and what competing stations charge. 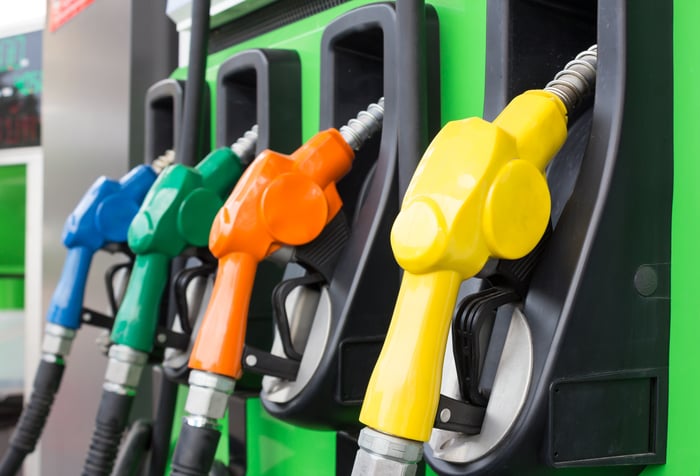 How does Costco gas work?

While Costco does not have gas stations at all of its clubs, the ones that do all work roughly the same. Aside from in New Jersey and Oregon, where full-serve stations are legally mandated, all Costco gas stations are self-serve, with traffic flowing only in one direction.

To buy gas, customers must either swipe their Costco membership card or pay via a Costco gift card. The chain does not take cash or checks, only credit cards. Costco also does not name its gasoline provider, instead offering a number of assurances on its website that its gas meets "top-tier" standards as set forth by a number of automakers including BMW, General Motors, Honda, Toyota, and Mercedes Benz.

How much will you save?

Costco does not promise a certain amount of savings. The chain also declined to comment for this story. Exactly how much you will save on gas varies by market, time of year, and by what other gas stations choose to do. Anecdotally, in the two markets where I live -- Hartford, Connecticut, and West Palm Beach, Florida, Costco has the cheapest gas of any area station with the savings varying from a few cents to around $0.15 from the next-cheapest.

For example, as of the morning of June 9, miamigasprices.com, a GasBuddy.com website, shows that gas in the state of Florida averages $2.34 while multiple Costco stations have prices of $2.19 per gallon, according to information submitted by drivers. There are other stations in that range, but when looking at the lowest reported prices, Costco consistently comes in below the average. That does not mean there are not outlier stations that equal Costco's pricing, but in a broad sense the chain is consistently cheap. Gasbuddy.com has geographic search capabilities that you can get to starting at the miamigasprices.com site here.

Dialing in for a more specific example, GasBuddy shows the Costco near Hartford, Connecticut, coming in at $2.21 a gallon, $0.07 lower than the next-lowest reported station.

That's generally in line with findings from The Christian Science Monitor and SavingAdvice.com, which reported savings anywhere from a couple of pennies a gallon to $0.30. There is, of course, one big exception to Costco being the cheapest and that's markets where rival Sam's Club, which is owned by Wal-Mart ( WMT 1.51% ), also has gas stations, and its prices rival Costco's.

There's no definitive number by which Costco is always lower, but in a conservative broad sense let's say over the course of a year you will save $0.07 per gallon compared to any station other than Sam's. Of course there can be local exceptions and The Christian Science Monitor noted that markets like Chicago, which have a heavy tax burden, saw less fluctuation between high- and low-priced stations.

That said, if you save $0.07 per gallon while using the roughly 15 gallons of gas each American household consumes each week, according to numbers from the Energy Information Administration (EIA), you would save $54.79 each year.

Of course, how much you actually drive, the mileage you get, and whether it's feasible to always get your gas from a Costco has to be considered. Numbers will fluctuate throughout the year, but it's important to examine your own situation and do the math for yourself.

Also, any savings estimates based on buying gas at Costco are purely based on pump prices. It's possible you would save more money using rewards programs from credit cards, supermarkets, or other methods to gain a discount which Costco does not offer.

Is it worth joining Costco just for gas?

While the numbers above are just a very broad estimate and the actual savings could be a little better or a little worse, in a broad sense, joining Costco just for gas works for people who drive more than the average American. If you fill up more than once a week -- and can do so at a Costco -- you should recoup the $55.

It's important to do the math where you live. These numbers work for me in Connecticut and Florida, but gas prices vary widely depending upon where you live. Remember to factor in any possible other ways to save on gas (like rewards programs) and analyze your own situation.

Of course, unless you drive well more than the average citizen of the United States does, it's not worth spending $55 up front for a small savings. The real value is in viewing the gas savings as paying for a membership that otherwise might no have been a good deal for you. Even average gas consumers could offset most, if not all of the cost of a Gold Star membership, essentially making every other perk Costco offers free.