What: Shareholders of Agios Pharmaceuticals (NASDAQ:AGIO), a clinical-stage biopharma primarily focused on cancer and rare genetic disorders, had a prosperous May. The company's stock soared more than 14% during the month, according to data from S&P Global Market Intelligence. 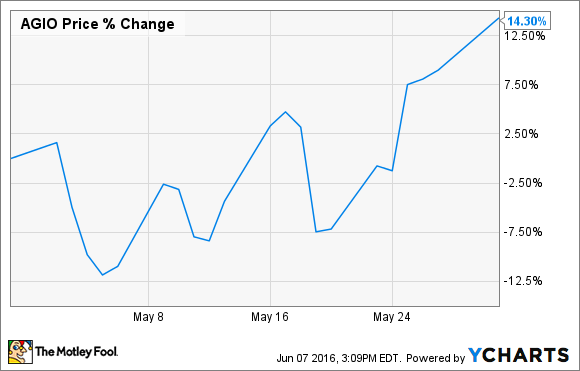 So what: Agios Pharmaceuticals had a lot going on during the month, but the big move can be traced to one big development.

Agios and its longtime partner Celgene (NASDAQ:CELG) announced that they have inked a new collaboration agreement. The two companies plan on using Agios' cellular metabolism research platform with the goal of finding new compounds to be used in the metabolic immune-oncology market. Celgene agreed to pay an upfront cash payment of $200 million to get the ball rolling.

The deal calls for all initial clinical work to be spearheaded by Agios, and once a preclinical program begins, Celgene will then have an option of participating in the compound's development by paying at least a $30 million fee. In addition, Agios could receive up to $169 million in clinical and regulatory milestone payments for each program, and the two companies would split worldwide rights on a 50/50 basis.

The agreement also calls for Celgene to be given a one-time option to select a metabolic immuno-oncology program and take on a 65% share of development costs and future profits. If it exercises this option, than Agios could receive up to $209 million in milestone payments.

In addition, if any inflammation or autoimmune compounds are developed from this program, Celgene has the option to become an exclusive worldwide license agreement and lead worldwide development and commercialization. Agios, in addition, may receive up to $386 million in payments and a double-digit tiered royalties on any net sales.

Finally, Celgene transferred its global rights for AG-120 back to Agios. This compound is being studied in multiple clinical trials as a treatment for cancer, and Agios plans to initiate pivotal trials in front-line acute myeloid leukemia late this year.

Now what: There's a lot for Agios' investors to like about this deal. When adding the $200 million upfront payment to the company's existing cash hoard, it now should have enough capital to fund operations well into 2018. In addition, there's plenty of opportunity for Agios to earn milestone payments along the way, which could further extend its cash-burn timeline.

There's no doubt that Agios has inked a nice deal with a first-class partner, is cash rich, and has an exciting pipeline, but since Agios is firmly in the clinical stage, the company's stock is bound to remain volatile. For that reason, only investors with a strong stomach for risk should consider investing.

This Is Why Agios Pharmaceuticals' Stock Rose 14.3% in May @themotleyfool #stocks $AGIO $CELG Next Article
Current