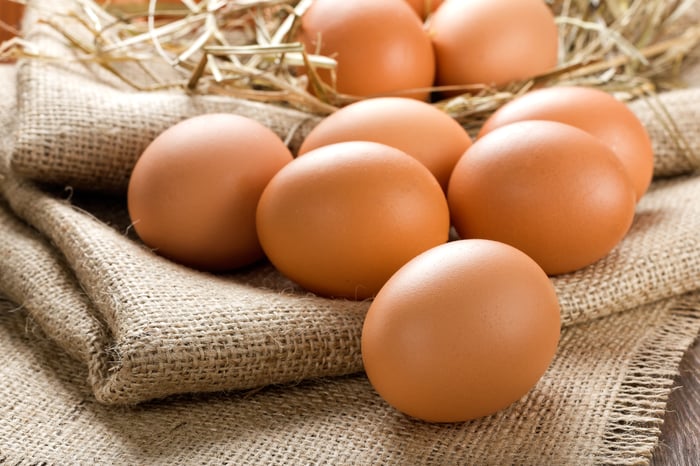 Walt Disney Co.(NYSE:DIS) pledged in April to use only eggs laid by hens not confined to battery cages at its U.S. parks and cruise lines by the end of 2016. With this move, the entertainment giant joined the deluge of restaurant and grocery store chains, and other corporate buyers of eggs, that have recently announced similar plans, though target dates vary. These include McDonald's (NYSE:MCD), Wal-Mart Stores (NYSE:WMT), and Costco Wholesale (NASDAQ:COST).

Investors looking for a way to profit from the accelerating cage-free egg movement should explore the stock of Cal-Maine Foods (NASDAQ:CALM), the largest producer of shell eggs in the U.S., and the only publicly traded pure-play egg company. Given its size, it should be able to ramp-up production of cage-free eggs more quickly than many others in the industry.

The cage-free egg movement in the U.S. started in earnest in 2008 when California voters overwhelming passed Proposition 2. This measure required that by Jan. 1, 2015, egg-laying hens raised in the Golden State be able to stand up, lie down, turn around, and fully extend their wings. Then in 2010, California lawmakers enacted AB 1437, which required that beginning in 2015, shell eggs sold in the state be produced in compliance with Prop 2.

Outcry among animal-rights groups and consumers across the country about raising hens in "battery cages" in the U.S. has since increased, leading to a steady stream of companies pledging to transition to producing, selling, and/or serving only cage-free eggs.

The way hens have traditionally been raised in the U.S. for more than a half-century is downright cruel. On average, each caged hen is provided a footprint of about 67 square inches of cage space -- less space than a sheet of letter-sized paper -- in which to live her entire life, according to the Humane Society of the United States. Such cramped quarters means the hens can't even spread their wings, which causes them extreme stress and to act in unnatural ways, according to animal scientists. While still far from the ideal of "pasture-raised" hens, "cage-free" hens generally have two to three times more space per bird in a barn than caged hens.

Beyond the humane aspect, some believe that eggs laid by caged hens likely aren't as nutritious as those produced by hens that possess at least some freedom of movement. Moreover, the European Food Safety Authority found that "Without exception...there was significantly higher risk of Salmonella infection in hens confined in cages."

Beyond Disney, below are select other companies that have pledged to fully transition to using eggs from cage-free hens. Their target dates are further in the future than Disney's because they're much bigger buyers of eggs, so being able to obtain an adequate supply becomes more of an issue.

Kroger, Subway, Burger King, Nestle, Unilever, and Starbucks are among the numerous other companies that have also announced plans to fully switch over to buying cage-free eggs.

A stock upon which to build a nest egg?

Cal-Maine Foods is the best way for investors to play the cage-free egg trend. It's by far the largest producer of shell eggs in the U.S. and the only pure-play publicly traded egg producer. In 2015, the company sold about 1 billion shell eggs, which the company said represented roughly 23% of domestic shell egg consumption. At the end of last year the company had 33.7 million layers and 8.4 million pullets and breeders.

The Mississippi-based company sells standard and specialty eggs, including cage-free, organic, and nutritionally enhanced under the Egg-Lands Best, Land O Lake, Farmhouse, and 4-Grain brands, and under private labels. Its customers include grocery store chains, club stores, and foodservice distributors primarily in the southeastern, southwestern, midwestern, and mid-Atlantic regions of the U.S.

Not surprisingly, Cal-Maine's specialty egg business has recently been growing faster than its overall business. This is great news for investors, as specialty eggs are more expensive, and likely sport higher profit margins. The company has a number of major capital projects under way to further expand its cage-free egg production capacity to meet expected growth in demand.

Cal-Maine's financial performance has been especially strong recently, though its results for the third quarter of fiscal 2016 weren't as robust as those for the first two quarters. That's because the price of shell eggs started coming back down to more usual levels in the quarter, after ballooning in 2015 due to a severe outbreak of avian flu decreasing the supply of egg-laying hens. (None of Cal-Maine's locations tested positive for this disease.)

The company's revenue increased 2.8% in the third quarter and 36.9% for the first nine months of fiscal 2016 compared with the year-ago periods. Meanwhile, earnings per share soared nearly 27% and 175%, respectively.

Cal-Maine has a variable dividend policy that has resulted in a quite juicy dividend at times. In each quarter that the company reports a net income, it pays a cash dividend to shareholders of one-third of the quarterly income. The stock is currently yielding 4%.

However, while there are many reasons to like Cal-Maine stock, it's not a good fit for investors who aren't comfortable with volatility. The company's financials are quite dependent upon the price of eggs -- a factor beyond its control.