What: Shares of Intuitive Surgical (NASDAQ:ISRG) have had a great run through the first half of 2016, gaining more than 18% so far this year, according to data from S&P Global Market Intelligence. That blows past the returns of the medical device sector in general, as measured by iShares Dow Jones US Medical Device ETF (NYSEMKT:IHI). 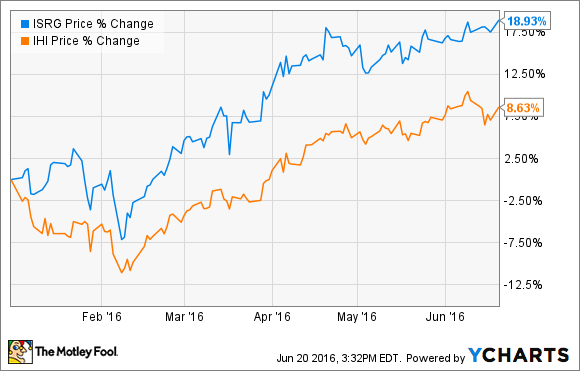 So what: The outperformance can be traced to a number of positive developments that have occurred over the last six months. Highlights include:

It also hasn't hurt that TransEnterix (NYSEMKT:ASXC), one of Intuitive's robotic surgery competitors, has badly stumbled during the year.  In April, news broke that the Food and Drug Administration had rejected TransEnterix's 510(k) submission of its SurgiBot system, stating that the company failed to show a "substantial equivalence" to an already legally approved medical device. That news caused the company's shares to fall hard, making it far more difficult for TransEnterix to raise capital at favorable prices.

More recently, TransEnterix decided to shelf its SurgiBot system and focus on the rollout of its ALF-X robotic surgery system instead. Thus far, the ALF-X has faced very limited market success in Europe, so Intuitive Surgical shouldn't have a problem continuing to outcompete this smaller rival.

Add it all up and it's no wonder that shares of Intuitive Surgical have performed so well this year.

Now what: Industry experts believe that the robotic surgery market will grow to $20 billion in annual sales by 2021. Compare that market opportunity to the $2.3 billion in revenue that Intuitive Surgical reported in 2015 and you can see that this company's future is looking bright.

Still, this is no time for Intuitive Surgical to let its foot off the gas as there is still plenty of well-financed potential competition out there. This remains Intuitive Surgical's market to lose, but the company's investors still need to keep their eyes open.