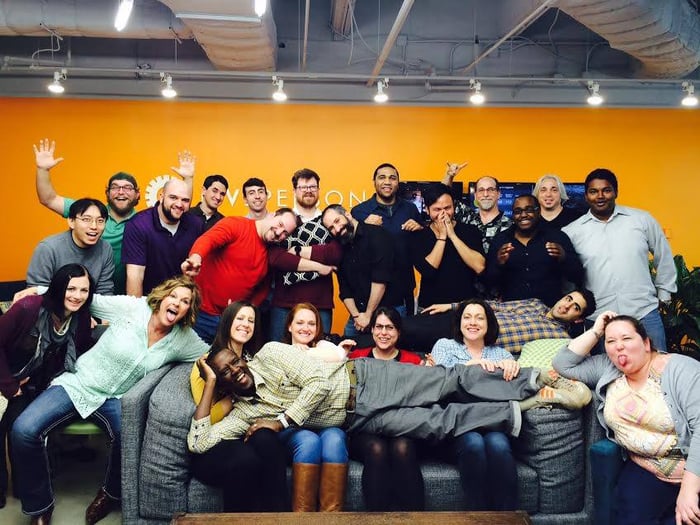 There's not a lot of life at LivePerson (LPSN -5.50%) these days. The provider of high-tech customer support reported another quarter of sluggish performance after Wednesday's market close. Revenue came in at $56.7 million, a dip of 4% when pitted to the prior year's top-line results.

There was a time when LivePerson was a consistent growth story. The cloud-based chat support specialist rattled off 51 consecutive quarters of sequential revenue growth before that impressive run was snapped early last year. It also had a great streak of year-over-year quarterly growth that stretched for more than 13 years. That ended during this year's first quarter, when revenue clocked in 7% lower than the year before. We're now eyeing back-to-back periods of top-line declines, a smaller and more inauspicious streak than the two that have recently come to an end.

LivePerson's business operations -- providing companies in all industries with cost-effective and immediate ways to assist support-seeking customers -- experienced a 5% decline. That was partly offset by a 10% spike in revenue for its consumer operations, but Presto Express -- the platform that offers users premium one-on-one advice on everything from financial guidance to tutoring -- accounts for just 7% of LivePerson's overall results.

Investors saw this coming. LivePerson's guidance was calling for $56 million to $57 million in revenue for the period, and it landed at the higher end of that range's midpoint. LivePerson was also forecasting an adjusted loss of $0.01 a share to $0.03 a share. It actually chimed in with an adjusted deficit of $0.04 a share, slightly worse than it was projecting back in early May. It reverses a modest profit posted a year earlier.

Companies continue flocking to the LivePerson platform. It signed 117 new deals for the quarter, including 36 new customers. The average trailing 12-month revenue per enterprise and mid-market customer is at a record $200,000. That's encouraging, but if revenue per customer is improving yet the top line is retreating it would seem to suggest that LivePerson is shedding more accounts than it's taking on these days.

LivePerson's updated guidance is problematic. It is hosing down its initial forecast for all of 2016. It now sees $221 million to $225 million in revenue, down from its earlier forecast of at least $230 million on the top line this year.

LivePerson initiated its outlook for the current quarter, and it also isn't very encouraging. Its target of $54 million to $55 million will stretch the streak of year-over-year declines to three quarters. It also represents an unwelcome return to sequential declines. It's also forecasting an adjusted loss of $0.01 a share to $0.03 a share. That was exactly its guidance for the second quarter, and we saw how that didn't pan out.

LivePerson is still confident about the LiveEngage "intelligent engagement" offering that it's been trying to get its customers to migrate to. The platform incorporates chat, voice, and content delivery support. It's hard to generate buzz for the platform at a time when revenue is declining and meager earnings are being morphed into modest deficits. It's also tough to get excited when a company is lowering its guidance. LivePerson leaves the quarter with more questions than it started with, and that may test the mettle of investors until it begins to live up to its bottom-line guidance and resumes top-line growth.

Rick Munarriz has no position in any stocks mentioned. The Motley Fool recommends LivePerson. We Fools may not all hold the same opinions, but we all believe that considering a diverse range of insights makes us better investors. The Motley Fool has a disclosure policy.