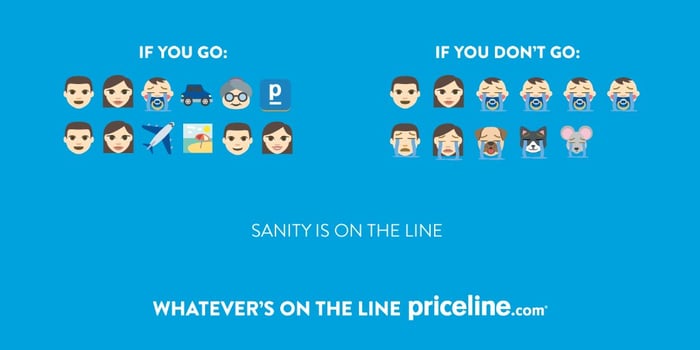 There may be some more room to ascend if you're a Priceline Group (NASDAQ:BKNG) shareholder, according to Evercore ISI analysts, who are upgrading the stock from hold to buy. Evercore is also boosting its price target from $1,350 to $1,650.

It's a big step up, but the stock was already trading north of Evercore's previous price goal. The new target implies 16% of upside off yesterday's close.

Priceline stock has never been cheap, but Evercore feels that it's attractive here as the undisputed global leader of online travel, fetching just 17 times its earnings forecast for next year. Priceline is padding its market share lead, growing faster than smaller players with a scalable model that should continue to reward its global appeal.

The Priceline is right

The dot-com darling is coming off encouraging financials that it posted two weeks ago. Gross travel bookings rose 19% -- or 21% on a constant currency basis -- to $17.9 billion for Priceline's second quarter. Adjusted earnings climbed just 8% to $703 million, but it's a 12% gain on a per-share basis since Priceline has bought back $2.5 billion worth of its stock over the past year.

The results exceeded Wall Street expectations and its own guidance, and its outlook for the current quarter was more than reasonable. It is expecting a 14% to 19% year-over-year advance in gross travel bookings. It is targeting adjusted earnings to clock in between $28.30 a share and $29.80 a share. Analysts were perched at $29.08 a share ahead of the report, seemingly in the middle of that range. However, even Wall Street pros know that Priceline offers lowball guidance.

Priceline has made a sport out of consistently beating its own profit outlook, and that range resulted in analysts juicing up their targets. They know that if they were parked at the midpoint that they would be too low, again. Wall Street now sees a profit of $29.85 a share during Priceline's most seasonally potent quarter. If history is any kind of teacher, that will be too low as well.

We are cleared for takeoff

The stock has been one of the market's biggest winners over the years, and it didn't seem as if that was going to hold up earlier this year when the stock cracked the floor to trade in the triple digits. It traded at levels last seen in late 2013, but the stock has gone on to bounce 50% higher since bottoming out in February.

Priceline has succeeded by making shrewd acquisitions outside of its own namesake portal. The purchase of Booking.com made it a powerhouse in Europe, a market that accounts for the lion's share of its travel reservations. It has also snapped up comparison travel shopping hub Kayak, leading restaurant reservations platform OpenTable, and a stake in Ctrip (NASDAQ:TCOM).

It expanded its investment in Ctrip earlier this year, teaming up with an investment firm to purchase $500 million in Ctrip's convertible bonds. The move gives Priceline for skin in China, once again cementing its place as a global juggernaut.

Priceline's been on a roll since the February correction that tripped up many growth stocks, but it's still attractively priced with forward earnings multiple in the high teens. If Priceline is holding up well know with Latin America in a funk and Brexit fears still percolating through Europe, one can only imagine how fast it will be growing if headwinds turn into tailwinds here.