The island nation continues to embrace capitalism. Perhaps your stocks can benefit from the shift toward a modern economy.

Last month, a JetBlue (JBLU -2.86%) flight originating from Fort Lauderdale touched down in Santa Clara, a city in central Cuba. Upon landing, the plane was met with a water cannon salute, a traditional honor for flights or sea journeys that are notable in some respect.

This one qualified: It was the first commercial passenger flight between the two countries in more than 50 years, making it a powerful symbol of the thaw in Cuban-American relations. Closer ties mean stronger business links -- so let's explore whether this happy development can also bring in serious money for investors. 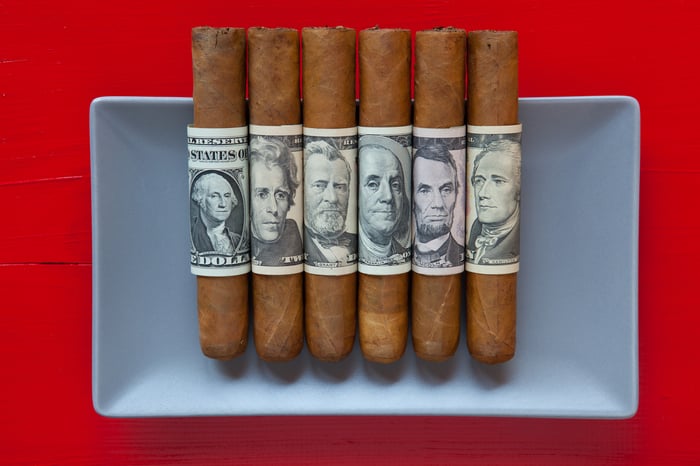 Before we dive into that, we have to keep firmly in mind that the country is still run by veterans and devotees of the country's 1959 revolution -- the revolution installed an inflexible Communist government and economy.

The transition from that disaster of an economic model to one approaching modern capitalism has been gradual and tentative. Going forward, it will probably continue to evolve slowly. For nearly 60 years, the government has had a firm grip on even the most trivial aspects of Cuban society, and it won't let go easily. So while prominent companies based in the capitalist world are winning business in Cuba, their victories are limited. At the moment, many are effectively forced to partner with state-owned entities, and they often have other profitability-dampening restrictions.

For instance, Starwood Hotels & Resorts Worldwide, soon to be owned by Marriott International, has signed deals to operate three hotels in Havana. However, the trio will remain state-owned, and the company has agreed to spend millions of dollars renovating them.

Consumer goods multinational Unilever entered into a joint venture agreement with local state-owned peer Intersuchel. The resulting entity will produce consumer staples for the Cuban market. But Unilever's stake in the JV is only 60%, while the government-held partner owns the remainder.

Warm but not wealthy

In addition to being weighed down by a heavy-handed government, the country remains poor. Although its gross domestic product has grown, both in absolute and per-capita terms, it's still low compared to other markets. Per head, its GDP stood at just under $6,800 in 2013, according to the World Bank. That's below the level of some of the world's more sluggish emerging economies.

If Cuba takes bigger strides toward freeing up its business sector, its citizens stand a chance of getting substantially richer. But at the moment, it doesn't look like that's on the horizon. These steps toward capitalism are small and halting.

Outside of the above factors, we need to remember that at the moment, big multinationals are practically the only ones dipping their toes into the island's warm waters.

Cuba's a big island, but it's a small fish in the global market in which these companies operate. Even if the country ends up being a resounding success for them, it probably won't make a major difference in their results.

There is one sector that shows brighter promise, though: tourism, specifically the transportation segment.

JetBlue is one of seven publicly traded carriers that have been tentatively approved by our government to fly into Cuba. The others are American Airlines (AAL 0.37%), Alaska Airlines (ALK -0.50%), Delta (DAL -2.33%), Southwest, United, and Spirit. The big caveat is that the government is limiting these companies to only a few daily flights connecting the most tantalizing of the destinations: Havana.

Out of that pack, American Airlines is the big winner: It will offer five direct flights per day to the capital, four of which are to originate in Miami (home to a large Cuban-American population). Also carving out early niches are Delta, which will fly from Atlanta and Miami and run a once-daily route from New York's JFK, and Alaska Airlines. On the West Coast, Alaska Airlines will operate its one daily Havana flight from Los Angeles, with a plane originating from Seattle.

The airlines haven't released revenue and traffic estimates for these routes. Regardless, they're sure to be popular, given the fascination with the country among many Americans, not to mention the number of people of Cuban descent in the States.

These are exciting times for the two countries, which, considering their proximity (they're only 90 miles apart) should be natural partners and collaborators.

Cuba has gone down the road of change, and it's probably too far to turn back now. The gradual opening of its market presents a good, if initially modest, opportunity for adventurous businesses. Investors could be rewarded if they choose carefully -- and if they're willing to wait.

Eric Volkman has no position in any stocks mentioned. The Motley Fool owns shares of and recommends Marriott International. The Motley Fool recommends Spirit Airlines. We Fools may not all hold the same opinions, but we all believe that considering a diverse range of insights makes us better investors. The Motley Fool has a disclosure policy.