Shares of Affymax hit a 52-week high yesterday. Let's take a look at how the company got there to find out whether clear skies remain on the horizon.

How it got here
It's been a long road for Affymax shareholders, with more potholes than most would have liked. Let's take a look at how Affymax has done in comparison to a few other small biotechs that have had much riding on FDA decisions in the recent past: 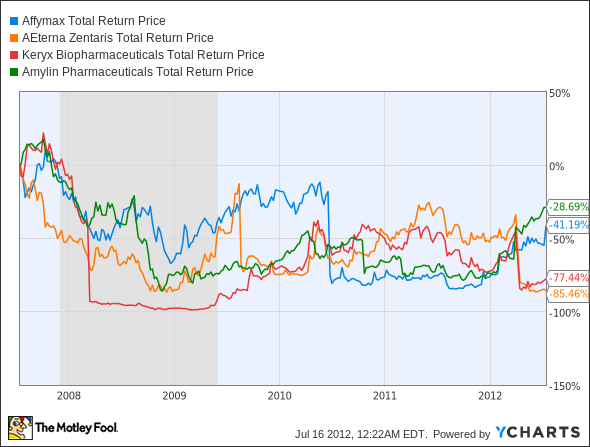 Long-term shareholders have suffered some brutal declines, but more recent buyers have had a lot to be happy about in the past 52 weeks: 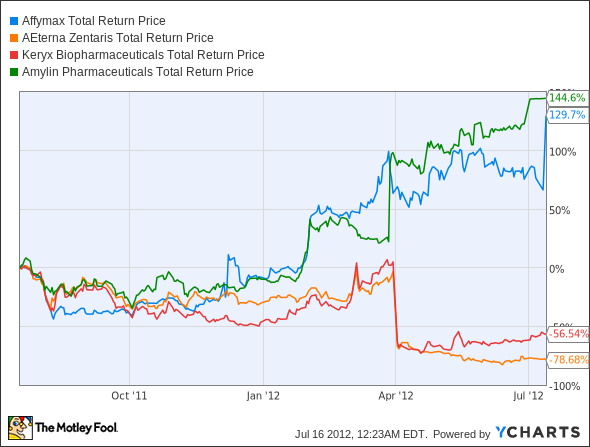 Affymax's Omontys was expected to coast to approval this year, and it achieved that approval at the end of March. Amylin's pop was all buyout rumor, which turned into buyout reality this month. Aeterna Zentaris and Keryx fell hard after their jointly developed colorectal cancer drug had an ineffective showing during clinical trials.

Since Omontys' approval was already priced into Affymax's soaring stock price, its big move last week came on news that a major dialysis-focused medical provider would begin using the drug in its facilities. That should juice earnings going forward, as Omontys' biggest X factor is its ability to compete with Amgen's market-leading anemia drugs, Aranesp and Epogen.

What you need to know
It's not easy to get a drug to market, but it's risky to bet everything on that one blockbuster. Do these biotechs have what it takes to keep growing in spite of setbacks? Let's take a look at how they've funded research and development, what that research has created (or might create), and how optimistic analysts are for the long-term success of those efforts.

It's easy to see why Amylin was the buyout candidate of this bunch -- it has more drugs on the market, a much larger R&D commitment, and avoids both the eggs-in-one-basket approach favored by Affymax and Keryx and the scattershot approach Aeterna's taken.

Affymax has a steeper road ahead. The company's already eked out some profit from reaching Omontys milestones. Its biggest challenges will be in maintaining profitable growth in the face of Amgen-led competition, and in coming up with the next big thing to keep the good times rolling. Affymax has almost no debt, which may make it an attractive buyout candidate down the road. For the time being, shareholders will need to keep a close eye out for future drug developments.

What's next?
Where does Affymax go from here? That will depend, in the near term, on its ability to sign up new health-care providers to offer Omontys. Its big deal last week was a great start, but it's only a start. The Motley Fool's CAPS community has given Affymax a two-star rating, with 78% of those rating the stock expecting it to continue its 52-week trend. CAPS players seem to think Affymax has short-term upside, but most aren't willing to take a long-term view just yet.

Interested in tracking this stock as it continues on its path? Add Affymax to your Watchlist now for all the news we Fools can find, delivered to your inbox as it happens. Looking for other stocks with huge potential? The Motley Fool's got three you can buy today. They're all at the center of the biggest transformation in modern industrial history. Find out more about these top picks in our free report on why "The Future Is Made in America."