Since 2012 began, the S&P 500 has returned 9.1%. Viewed from a historical perspective, that's a great return in just over six months.

But for some companies, a 9.1% return seems like child's play. Below, I'll give you the names of four companies that are up huge in 2012, explain why they're up, and at the end, offer access to a special free report detailing five stocks only the smart investors are buying right now.

It's all about obesity
The pharmaceutical industry is ripe for big moves. When the FDA approves a company's wonder drug, the stock can absolutely rocket; if approval is denied, the company can tank. This helps explain why three of our top stocks in 2012 came from the drug industry. 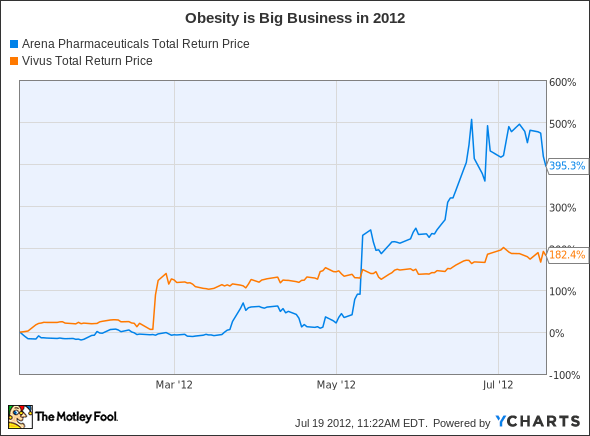 We'll start with both Arena Pharmaceuticals and VIVUS . Both companies are up big this year based on their promise to help Americans fight obesity. VIVUS was the first to pop this year, jumping 90% when an FDA panel voted to approve Qnexa (since renamed Qsymia). It wasn't until just a few days ago that the official seal of approval was conveyed.

Arena, on the other hand, got a much later pop, but it's up far more than VIVUS. The first signs of approval surfaced in early May, and were followed up by an official approval in late June, which also caused a major bump.

Our Foolish medical guru David Williamson does a great job of breaking down what to look for with these two companies. VIVUS ' Qsymia has been shown to be more effective, and it will likely be the first drug to make it to the market. Arena's Belviq could still have the upper hand, though, as female users of Qsymia must be on birth control and get pregnancy tests because of the potential harmful side effects related to the drug.

Two more from across the broader market
Pharmaceuticals that focus on obesity weren't the only companies to make big jumps. Affymax made it by combating anemia in patients with chronic kidney disease. It's joined by gun maker Smith & Wesson on the list of 2012's best performers. 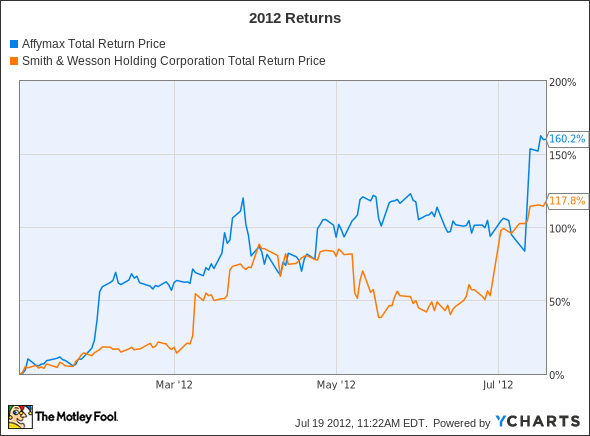 Affymax finds itself in an interesting situation. In late March, the company's Omontys drug was approved. As Foolish expert Brian Orelli explains, Affymax will have its hands full competing with market leader Amgen and its drug Epogen.

Omontys is actually more convenient than Epogen, as it only needs to be taken once per month, while Epogen requires multiple weekly doses to be effective. All things being equal, this would give Affymax a huge advantage.

But all things aren't equal. Amgen has a larger market presence, and it also has favorable contracts in place with both DaVita, the United States' largest dialysis provider, and Fresenius Medical Care. Affymax has countered through a partnership with Takeda Pharmaceutical. Only time will tell how this sales battle plays out.

On a completely different front, it seems as if the gun business is booming. Smith & Wesson surged 23% when earnings came out in early March, as both revenue and earnings exceeded analyst expectations. As fellow Fool Rich Duprey pointed out, "FBI background checks for firearms purchases have soared almost 64% since 2006, and so far in 2012, they're running 12% ahead of the pace set in the same period last year."

I can't be sure whether citizens are worried that the current administration will curtail the right to bear arms or whether there is something else going on, but it's pretty clear that Americans are moving to arm themselves in increasing numbers.

But does this really do you any good?
It's pretty easy for me to tell you about stocks that have already made big jumps. It's another thing to let you know before the big jumps happen. Our top analysts have just put together a special free report intended to help you get in before the big jump.

"The Stocks Only the Smart Investors Are Buying" highlights some seriously undervalued companies that aren't on most investors' radars. Get a copy of the report to get the names of those businesses today, absolutely free!