Please ensure Javascript is enabled for purposes of website accessibility
Log In Help Join The Motley Fool
Free Article Join Over 1 Million Premium Members And Get More In-Depth Stock Guidance and Research
By Brian Shaw – Feb 1, 2014 at 8:00AM

Despite tremendous growth and momentum, Amazon.com has a few weaknesses to address as it furthers its mission to create the perfect customer experience.

Amazon.com (AMZN -0.77%) has built a solid business by focusing on a few basic strengths. However, despite growing revenue by more than 1,000% over the past decade, there are still a few areas where the company's business model does not hold up to the competition. In these areas, brick-and-mortar retailers such as Wal-Mart (WMT 0.43%) and Target (TGT -0.02%) retain an advantage.

Current limits of e-commerce
At times, it seems that Amazon.com sells just about everything. While this is true to some extent, there are still gaps in product selection that Amazon has not been able to fill. An obvious example is perishable food. Outside of the three trial markets for AmazonFresh, customers can't order milk, meat, and a wide range of other fresh foods from Amazon. As a result, customers must go to brick-and-mortar locations ranging from discounters like Wal-Mart to high-end grocers like Whole Foods Market. While the customer is already at the store, they are often purchasing items that are available for purchase on Amazon.com.

The ability to deliver groceries is largely a logistical issue that Amazon may overcome if it decides to expand its AmazonFresh concept. However, there are still plenty of other examples, such as the sale of prescription drugs, that would require new systems and processes in order for Amazon to compete.

An often forgotten aspect of brick-and-mortar stores is personalized service. While big-box concepts like Wal-Mart don't offer much in this regard, many businesses staff locations with experts who can advise customers on the best solution for the customer's needs, whether it be a recipe for a dinner party or tools for a do-it-yourself project. Beyond the "Mayday" button on the new Kindle Fire HDX, this level of personal service is not available to Amazon customers.

The customer experience comes at a price
Amazon is well known for its focus on creating a great customer experience. While low prices, free shipping, free streaming videos to Prime subscribers, free cloud storage, and an array of other perks draw customers to the website, these perks come at a cost. A common theme among bearish arguments against investment in Amazon is that the company simply doesn't make money; whether or not an investor believes in CEO Jeff Bezos' deliberate decision to sacrifice short-term margins for long-term growth, there is fact behind this criticism, as illustrated below: 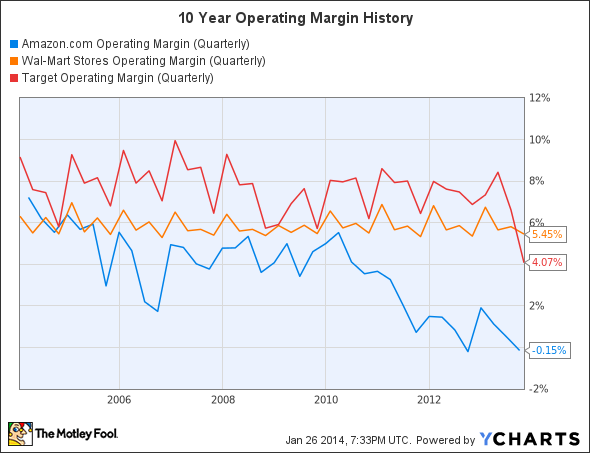 While Wal-Mart has remained remarkably consistent in its ability to generate operating margins of approximately 6%, Amazon has a noticeable downward trend in its operating margin. While sales continue to grow at a healthy pace, Amazon reported operating income of just $235 million during the first three quarters of 2013 on revenue of almost $49 billion.

Responsibility for third-party sellers
A significant portion of Amazon's selection is sold by third parties through Amazon. While this added selection is largely a positive for both customers and the small businesses that partner with Amazon, reliance on third parties creates several issues for a company that is focused on equating its brand with a trustworthiness. As evidenced by reviews posted on Amazon by unhappy customers, the items that are sold by third parties are not always as advertised -- whether it be counterfeit goods, a different color or style than described, or some other quality issue. Amazon faces a huge challenge in managing the quality of the goods sold by partners and preserving its own reputation.

Another consideration relates to pricing. While the website allows customers to see the pricing available from different retailers, it does not have a clear ability to regulate the prices set. As a result, there are some dramatic differences in pricing within the site itself. Some partners offer low prices to attract customers and then charge steep shipping fees, while others appear content to list products at an exorbitant price significantly in excess of the MSRP. While some customers may be willing to pay a higher price for an in-demand item such as the hot children's toys of the holiday season, there is the risk that others will lose trust in Amazon.com as the place to go for low prices.

Whether it be the result of quality or price, any damage to Amazon's reputation and the trust that customers place in the company has the potential to undo years' worth of Amazon's efforts to build its brand.

Foolish takeaway
Selection expansion, profitability, and relations with third-party sellers are all on Amazon's radar. However, navigating through these weaknesses will be a tricky process given the opposing forces of expansion and customer focus on short-term profitability. Using the past 20 years as precedent, all signs point to Amazon continuing to favor expansion over profit; as a result, investors who agree with Slate's Matthew Yglesias and his popular statement that "Amazon, as far as I can tell, is a charitable organization being run by elements of the investment community for the benefit of consumers" may want to look elsewhere to invest.

Is Amazon Stock Really a Cheap Buy? Here's What the Charts Say
360%