Fast casual concepts like Chipotle and Panera continue to be leaders amongst restaurant chains in the United States.

Over the past 60 years, the restaurant industry has almost doubled its share of every dollar spent on food in the United States, from 25% in 1955 to 47% today. This growing portion of consumer spending on food has led to the restaurant industry creating jobs at a faster rate than the overall economy for the 15th consecutive year. The megatrend toward consumers eating out more often should come as no surprise, but it is often useful to point out these statistics as a reminder of the huge opportunity for successful restaurant concepts. For those that prefer a visual, the sales trend of the overall restaurant industry illustrates this tremendous growth: 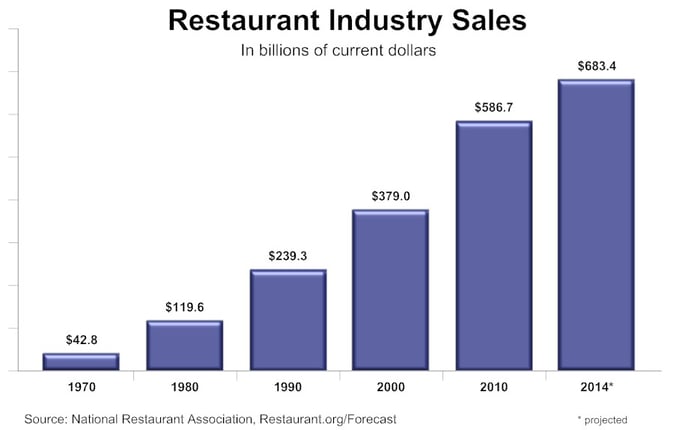 Fast casual leads the pack within a growing industry
Within the larger trend of restaurant growth is an equally powerful sub-trend favoring fast casual restaurants. These restaurants, led by companies such as Chipotle Mexican Grill (CMG 0.83%) and Panera Bread (PNRA), hit the sweet spot for consumers by providing quality food, reasonable prices, and quick service. This value proposition resonates with many consumers that are looking for a quick meal that is healthier than the fast food brands and less expensive than casual and fine dining options.

For five consecutive years, traffic at fast casual restaurants has outpaced all other classes. In 2013, this growth in traffic was a strong 8% as illustrated below: 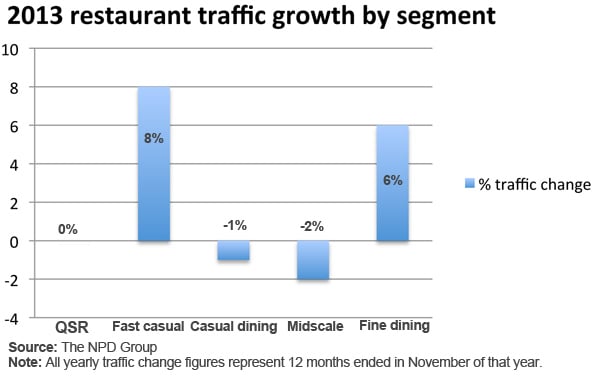 Culinary trends for 2014
According to the National Restaurant Association, the trends toward local sourcing, sustainability, and healthy options for children will remain strong in 2014. This is where fast casual concepts like Chipotle and Panera can differentiate themselves from the competition; Chipotle's "food with integrity" mantra and its commitment to treat people, animals, and the environment with respect fits perfectly into this broader trend.

Likewise, Panera offers an array of pastas, soups, salads and sandwiches on its kids menu that include much higher quality ingredients than you'll find in any Happy Meal. Smaller fast casual concepts like Noodles & Company (NDLS -0.50%) are also gaining in popularity thanks to the creation of new tastes that aren't found at many competitors; there are hundreds of places to buy a cheeseburger, but far fewer fast food options that feature a pork adobo flatbread featuring naturally raised pork.

Consumer trends translate into strong growth
Customers are flocking to fast casual restaurants, which has allowed this subset of the industry to experience explosive growth. Chipotle opened 185 restaurants in 2013 to end the year with 1,595 locations; the company expects to repeat that growth with new store openings of 180-195 in 2014.

Panera experienced solid growth as well during 2013, opening 133 locations and finishing the year with 1,777 restaurants. Management provided an estimate that 115-125 locations will be opened during 2014.

Noodles & Company is much earlier in its expansion; the company had only 380 stores at the end of 2013, of which 53 were opened during the year. Management is forecasting 42-50 openings during 2014.

Each of these companies are expected to outpace industrywide growth for the foreseeable future.

Investors should take notice
When a consumer megatrend is fueling long-term growth within a portion of an industry, investors should take notice. In the case of high-growth fast casual concepts, they have with premium values on Chipotle (valued at 38 times 2014 estimated earnings) and Noodles & Company (valued at 60 times 2014 estimated earnings).

These valuations may seem steep, but consider all of the ways that Chipotle can continue to grow thanks to same store sales growth, domestic expansion, international expansion, and new concepts such as ShopHouse Southeast Asian Kitchen. Likewise, at just 380 locations, Noodles & Company could quadruple in size and still be smaller than Panera.

Purchasing shares of Chipotle as it is touching new all-time highs may not be the best timing, but shares of the company have been sufficiently volatile to allow for good entry points on a regular basis. Noodles & Company is still experiencing significant volatility following last year's IPO, and shares are 25% lower than the highs reached in late 2013. While neither company is a screaming buy at today's prices, the businesses are both strong; as a result, investors should put these companies on their personal radar and be ready to buy shares when a more attractive valuation inevitably becomes available.

Panera is in a slightly different situation; low earnings-per-share growth expectations for 2014 of just 5-8% have limited Panera's valuation to 23 times estimated earnings in 2014. While this lower growth warrants a lower growth premium than a company like Chipotle, this creates a compelling valuation for a debt-free restaurant operator committed to further expansion and share repurchase. As a result, Panera is likely the best buy of these companies at today's prices. Over the very-long term, it is reasonable to expect that all three companies will beat the overall market.