Stock splits are most commonly associated with positive news since they typically happen when a stock has performed quite well and generally result in an increased number of shares owned by each investor. But those splits, officially called forward stock splits, are only one variety. It's also possible for a company to complete a reverse stock split, which works in the exact opposite way. Unlike forward splits, reverse stock splits leave shareholders with fewer shares, and they often result from situations in which a stock has lost a substantial amount of its value.

What does a reverse stock split mean to an investor?

A reverse stock split happens when a corporation's board of directors decides to reduce the outstanding share count by replacing a certain number of them with a smaller number.

Reverse stock splits work the same way as regular stock splits  but in reverse. A reverse split takes multiple shares from investors and replaces them with fewer shares. The new share price is proportionally higher, leaving the total market value of the company unchanged.

Calculating the effects of a reverse stock split is easy. Simply divide the number of shares you own by the split ratio and multiply the pre-split share price by the same amount. For instance, say a stock trades at $1 per share and the company does a 1-for-10 reverse split. If you own 1,000 shares -- worth $1,000 at current prices -- you'll get one new share for every 10 old shares you own, or 100 new shares. Immediately after the reverse split, the stock price will rise tenfold to $10 per share. That will leave your smaller position still worth the same amount since 100 shares multiplied by $10 per share equals $1,000. To be perfectly clear, a reverse stock split doesn't change the overall value of your investment -- at least not all by itself.

Why do companies do reverse stock splits?

A company does a reverse split to increase its share price. The most common reason is to meet a requirement from a stock exchange to avoid having its shares delisted. For example, the New York Stock Exchange has rules that allow it to delist a stock that trades below $1 per share for an extended period. Plus, many institutional investors are not permitted to invest in stocks with share prices below a certain minimum. 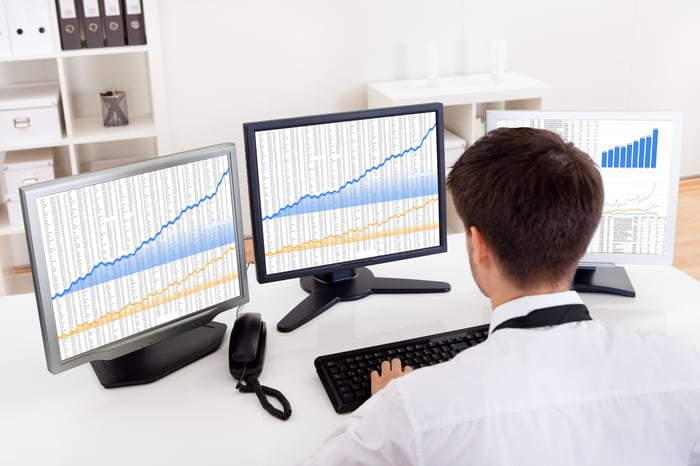 Is a reverse stock split good?

A reverse split isn't necessarily good or bad by itself. It is simply a change in the stock structure of a business and doesn't change anything related to the business itself. That said, a reverse split is usually taken as a sign of trouble by the market, and most of the time it isn't done for a positive reason.

In rare cases, a reverse split buys a company the time it needs to get back on track. For instance, a reverse split worked for internet travel giant Priceline, now Booking Holdings (NASDAQ:BKNG), which did a 1-for-6 reverse split following the internet tech bust. Since bottoming in late 2000, shares of the travel company are up more than 6,000%. So it's fair to say that a reverse split can be an effective tool for struggling companies to use.

As previously noted, the reverse split itself doesn't result in any change in the value of an investor's position in a stock because the smaller number of post-split shares is offset by the proportionally higher per-share price. However, a reverse split can certainly change investor perception of the company. Stocks that go through reverse splits often see renewed selling pressure afterward, and the number of companies that emerge from reverse splits to produce strong long-term returns is small.

The short answer to the question, "Is a reverse stock split good?," is that it depends on the circumstances. If a company whose stock you own announces a reverse split, the best course of action is to read the press release and SEC filings detailing the reasons and decide if it was a smart business decision or a desperate maneuver to prop up the stock price.

Let's take a look at a real-world example of a reverse stock split. General Electric's (NYSE:GE) stock price had been struggling for years as a result of mismanagement of certain aspects of the business, and the former Dow Jones Industrial Average component found itself stuck with a stock price that was barely in the double digits.

According to GE, the company had divested (sold) several major components of its business in recent years, but its share count remained the same. Therefore, a reverse split would reduce the share count to a point where the stock price better reflected the actual size of the current business.

In June 2021, General Electric announced a 1-for-8 reverse stock split to reduce its share count and raise its price. According to the press release announcing the reverse split, "GE plans to file an amendment to its certificate of incorporation to effectuate the reverse stock split after the close of trading on July 30, 2021, and GE common stock will begin trading on a split-adjusted basis on August 2, 2021."

The effective date is more of an accounting issue and isn't too important for investors to know. In simple terms, if you owned 800 shares of GE before Aug. 2, you owned 100 shares when trading opened on that date.

Of course, in the real world not all GE shareholders owned shares in a multiple of eight prior to the reverse split. In these situations, cash was given for any fractional shares that were left over after the 1-for-8 ratio was applied. For example, if you had 20 shares of GE prior to the split, 16 of them would convert into two shares of the split-adjusted stock. The remaining four shares would be removed from your brokerage account, and you would receive cash for their value.

Should I sell before a reverse stock split?

There's no perfect answer for this question regardless of the situation. Every investor is different, with different goals, risk tolerances, and expectations. In the General Electric example, long-term investors might applaud the reverse split as an essential step in the company's restructuring plans. Or, they might view it as a sign of future market volatility and decide to sell. The point is that neither answer is wrong. The best bet is to evaluate the particular situation and determine if it makes good sense for you to hold.