PriceSmart is making all the right moves south of the border.

Last summer, I pledged to put at least $4,000 of my own money behind 10 stocks. My goal was to build the World's Greatest Retirement Portfolio.

Today, I'm going to tell you why PriceSmart deserves a spot in any retirement portfolio. Below, I'll explain two key components to focus on for the stores. At the end, I'll offer you access to a special free report that has three more ideas for the perfect retirement portfolio.

How'd it do that?
PriceSmart is a near-clone of Costco , operating in Latin America instead of the United States. Former Costco CEO Jim Sinegal actually learned everything he knows from Sol Price, and the company was formerly a part of Costco's corporate structure.

A funny thing has happened with PriceSmart over the past year: Margins have compressed, and the company has missed earnings expectations in three of the past four quarters. And yet, it has returned 38% versus the S&P's meager 3.6% since my original recommendation.

Compressing margins to drive growth
In part because it feels the heat from Wal-Mart and other market players entering the scene in Latin America, PriceSmart has adopted a new strategy to make its wholesale membership concept even more appealing. Already operating with thin margins, CEO Jose Luis Laparte has made it very clear that the company will be shaving prices even more in an attempt to drive traffic at stores.

As you can see below, this has shown in gross profit margins that have been significantly compressed. 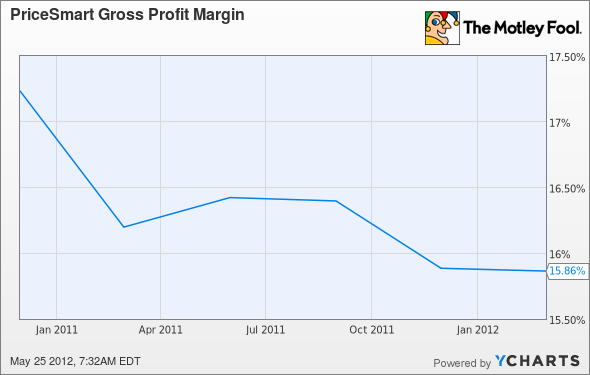 Though investors never like to see wholesalers cutting margins even thinner, the tactic seems to be working, as same-store sales have been up considerably over the past six months.

And before worrying that April's numbers represent a slowdown in business, there's a good reason for the lower numbers: The timing of Easter week -- or Semana Santa -- was significantly different this year. Traditionally, whole countries get the week off work and everything shuts down, so don't read too much into it. The revenue increases are truly impressive, and investors clearly believe in management's long-term strategy.

South America, here we come!
Beyond realizing that margins will be thinner, there's another key component to PriceSmart that investors need to monitor: the gradual push into South America.

Within the last year, the company set up its first store in Barranquilla, Colombia. Things have gone well enough there that it has purchased land and has plans to open two more stores in Cali, Colombia.

Though it might be difficult to break the stranglehold that Wal-Mart has in Brazil, there are still millions of South American consumers available in Venezuela, Peru, Chile, and Argentina, to name a few, for PriceSmart to tap. And remember, there are only 29 PriceSmart stores in existence, meaning there's tons of room for growth.

Clearly, with a valuation as lofty as it is today -- PriceSmart currently sports a P/E north of 30 -- investors are counting on the company's foray into the continent to go well.

A solid bet for your retirement
All of this ignores the fact that PriceSmart also offers a small 0.8% dividend. I'm not worried, though. The company is using its cash flow to finance expansion. When that expansion slows, it will be able to offer a better yield for investors.

I'm clearly excited about this international opportunity, but if you want further investment ideas for your retirement portfolio, I suggest you check out our latest special free report "3 Stocks That Will Help You Retire Rich." Inside, you'll get the names of three stalwart businesses that promise to be dominating their fields -- and rewarding shareholders -- for years to come. Get your copy of the report today, absolutely free!