Bernd Schmid
(BVBernd)
Author Bio
Bernd has been a Freelance Writer for The Motley since 2013. He likes to consult SMEs in Germany regarding their Financial Figures and invests in companies with great management and financials. You can follow Bernd on Twitter at @BerndSchmid.

This a lot to cope with for investors who were used to (and I do not mean this negatively) boring press releases mainly covering quarterly financial results or the acquisition of new parcels of land. The question is: What does all this mean for investors?

Xinyuan's market valuation
The Motley Fool prefers to focus on the business behind a stock instead of stock price movements. However, we do have an eye on the price tag that the market puts on a business in order to identify potential buying opportunities, usually marked by a divergence of a stock's price and the value of the underlying business. The following chart shows the price of Xinyuan's stock and Xinyuan's annual diluted earnings per share, or EPS, since its IPO in late 2007. 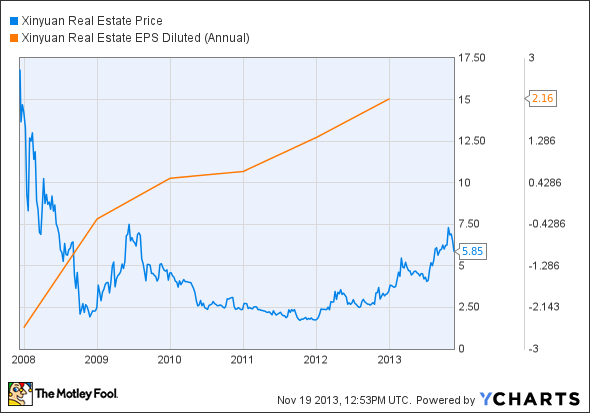 While the stock price has grown recently, it is still down more than 60% from its IPO level. At the same time, Xinyuan's EPS shows a consistent uptrend and is still at quite a conservative 3.29 times last year's earnings and 0.43 times book value, according to S&P Capital IQ.

Management's performance
An allegedly wonderfully priced stock is not necessarily a good investment. It could mean something is fundamentally wrong with the company. So let's have a high-level view at Xinyuan's return and how management has achieved it:

The return on equity, or ROE, measures how well a company generates earnings based on the capital paid in by shareholders. It has been positive and consistently increasing since 2007, which is a good sign for shareholders.

In general, ROE is increased in one of two ways. A company uses its resources more efficiently, meaning it generates more earnings with the same asset base. Return on assets, or ROA, measures this efficiency. A second way to increase ROE is by taking on debt. Debt increases a company's asset base without directly affecting shareholder's equity. Hence, a company with the same efficiency but higher level of debt as a comparable company will have a higher ROE.

Lines two and three in the table above break Xinyuan's ROE down into two components that resemble those two criteria. We can see that Xinyuan has kept its financial leverage fairly constant at a level of 2 since its IPO. This means its total assets stem 50% from shareholder's equity and 50% from debt. So what the table tells us is that Xinyuan has increased the return for its shareholders by more efficiently utilizing its assets. Hence, the business seems to operate increasingly efficiently and profitably.

Main risks
Why, then, has the market not acted accordingly and increased the price for Xinyuan's stock? Let's for the moment assume the market acts completely rational (does it ever, actually?), there must be something else to the business or the market Xinyuan is operating in.

According to Xinyuan's own risk assessment, the Chinese real estate market is very competitive. Even though Xinyuan focuses on Tier II and Tier III cities, while big players often start out in Tier I cities, the bigger competitors may use their brand to grab market share from Xinyuan anytime. In addition, according to common media coverage, there are a few opinions that the Chinese Real Estate market may be overheated. Those are two arguments why Xinyuan's stock may deserve a discount.

Last but not least, a new strong investor and a completely new (though experienced) executive management team will challenge the company's course, which previously seemed to have been determined mainly by a one-man show of ex-CEO and co-founder (now Chairman of the Board) Yong Zhang.

A first indication of a strategic shift was the company's latest quarterly report, in which management announced a substantial increase in management headcount by 44%. My personal opinion is that the new investors and management team see a chance to increase the company's revenue by selling more property than historically. The main argument is that Xinyuan's sales in terms of gross floor area, or GFA, has been stagnating at around 150sqm per quarter (see the chart below). An increase in management headcount may increase Xinyuan's capacity to handle more projects concurrently. 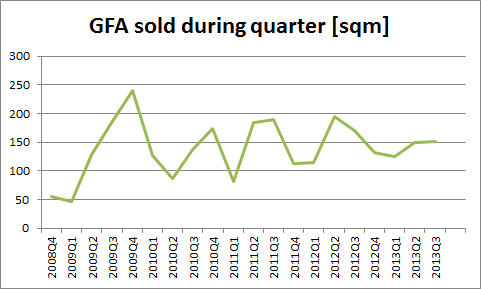 Looking ahead
Xinyuan's financial performance should have been increasingly delightful for investors in recent years. The appreciation in stock price seems to lag behind Xinyuan's business, though, mainly because of the lack of investor confidence in the stability of the Chinese housing market, combined with the intense competition. The resignation of the newly hired CFO is an additional concern since the real reasons are unknown.

While I do share these concerns, I believe the current stock price offers a favorable risk-reward ratio for investors -- particularly if the increased size in Xinyuan's non-executive management leads to consistently higher sales. This is what investors should have an eye on in the coming months and quarters.

Where Is Xinyuan Heading? @themotleyfool #stocks $XIN Next Article
Current