Please ensure Javascript is enabled for purposes of website accessibility
Free Article Join Over 1 Million Premium Members And Get More In-Depth Stock Guidance and Research
By Dan Carroll - Mar 8, 2014 at 10:05AM

Five years after the recession's bear market low, we look at how global markets from the Nikkei 225 to the Hang Seng and DAX compare to the S&P 500's post-recession rise.

It's been nearly five years since March 9, 2009, the day the last bear market reached bottom and the starting point for one of the most dramatic bull markets in recent history. In the past five years the S&P 500 ( ^GSPC -0.84% ) picked up more than 175% as stocks across the market have capitalized on the recovering world economy's momentum. While U.S. stocks have climbed, however, those gains haven't stretched equally around the world's many stock indexes.

The growth of emerging markets has taken center stage in recent years, but has Asia gained as much as the hype would lead you to believe? Europe's recovery has slogged through austerity and deep recessions in major economies such as Italy and Spain, but have European markets really followed the continent's economies off the cliff? Let's take a look at how some of the world's leading stock markets, from Asia's Hang Seng Index (HSIINDICES: ^HSI) and Nikkei 225 (NIKKEIINDICES: ^NI225) to Europe's DAX ( ^DAX ) and CAC-40, fared in the past five years -- and how they've stacked up against the United States' growth since the bull market kicked off.

Asia's impressive growth still trails U.S. markets
Asia's markets haven't disappointed investors as of late -- particularly Japan's Nikkei 225, which has rallied from sluggishness in the early post-recession years to huge gains since the beginning of 2013. 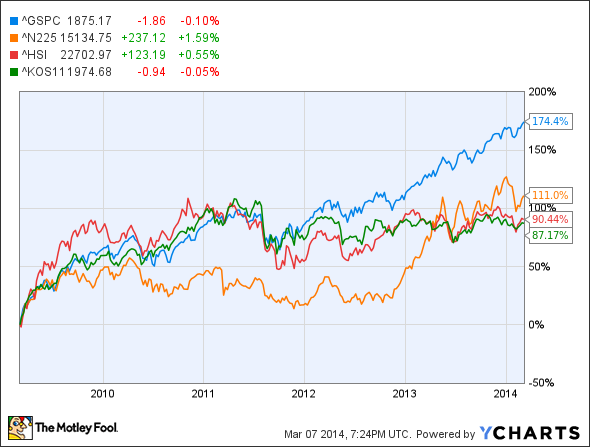 Yet even the Nikkei's doubling since the last bear market's low point hasn't been enough to outpace the astronomical rise of the S&P 500 and other major U.S. indexes. To be fair, the Nikkei was held back during the first part of that period as Japan remained mired in a stagnant economy that had pervaded for two decades. It wasn't until Shinzo Abe stared his second go-around as prime minister last year and instituted the unprecedented stimulus plan that kicked the Japanese economy into high gear that the Nikkei got going, although economists have raised concerns about a slowdown recently. In the most recent fiscal quarter, Japan's economy grew at an annual rate of just 1%, far below the 3% rate economists had projected on average.

That miss is hardly reason to grow too concerned about Japan's comeback over the past year, but upcoming events could threaten select major stocks in the world's third-largest economy. To counter the world's largest public debt, Abe has planned to boost the country's sales tax from 5% to 8% in April, which could take a bite out of Japanese consumer spending in the latter half of 2014. For stocks such as Sony ( SONY -0.12% ), this could be a big blow. Sony hopes to capitalize on the yen's weakening to use a favorable currency impact to boost overseas sales for its bottom line, but Japan is still the company's third-largest market after China and the U.S. While Sony hopes emerging markets such as India can buoy growth, keep an eye on how that sales tax hike hits its stock, as well as Japan's economy and other companies, in the coming months.

South Korea's KOSPI Composite Index and Hong Kong's Hang Seng have underperformed the Nikkei slightly and haven't even managed half of the S&P 500's growth over the past five years; their best days in the post-recession period came during the initial bounce back from the bear market's bottom. China's Hang Seng has endured a rough go of things over the past year as concerns have mounted over questionable economic data, particularly as the world's second-largest economy saw its manufacturing output hit a seven-month low in February, according to the purchasing managers' index from HSBC and Markit. Beijing still targets a 7.5% annual economic growth rate, but if the country can't get its manufacturing back on a reasonable pace, China's economy -- and the Hang Seng and major Chinese stocks -- could struggle to meet expectations. 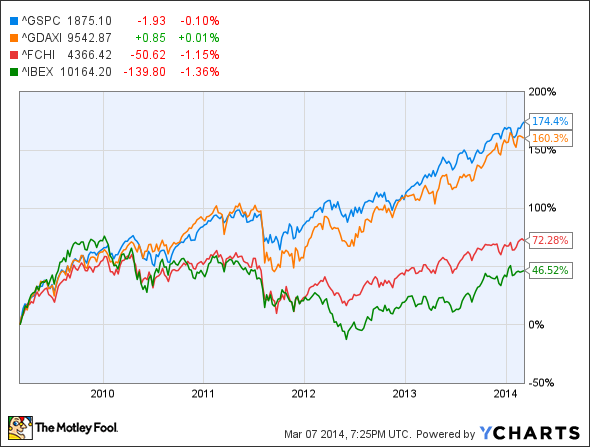 What accounted for the DAX's growth of more than 160% since the recession? Europe's largest economy has managed to hold onto tepid economic growth despite the continent's crisis, and leading German multinational companies have expanded beyond the eurozone to emerging markets, the U.S., and other more promising countries in the pursuit of growth. Unemployment has been on the downswing in Germany, and while Europe is still under pressure, the Bundesbank has expressed optimism that European markets will improve in coming years, helping bolster Germany's exports to its largest trade region. For German companies and investors, the future looks much brighter than it did during the depths of the recession, despite all that Europe has endured since then.

Other markets haven't prospered so much, but even investors in weaker European countries, such as Spain with its IBEX 35 stock index and France's CAC-40, have managed decent gains over the past five years -- albeit ones trailing far behind the S&P 500's and the DAX's growth over that time. With France's manufacturing still in steep decline and economies such as Spain and Italy facing fragile futures, however, investors need to invest carefully in European countries outside of Germany. As always, it's pivotal to focus on the fundamentals of businesses you buy -- and that's doubly important when said company is reliant on an unsteady economy like Europe's.

U.S. markets shine in the wake of the recession
Despite some promising growth from global stock indices such as Japan's Nikkei and Germany's DAX, the S&P 500 and U.S. markets have rewarded investors the most since the low point in the recession's bear market five years ago. While many economies have shown promise going forward -- particularly in Asia, where Japan and China, despite lingering questions, have managed healthy growth over the past year -- the United States' combination of a steady recovery and welcome business climate make America's investing future look as good as any across the world. Keep a sharp eye on the basics of stocks and businesses as you always would as a global investor, but don't overlook the impact a reliable economy can have on the market's many industries.