Emerging markets have improved since the beginning of the year, but new risks have arisen that should concern global investors.

Although emerging markets have felt some pain in 2014, more troubles lie ahead for the asset class. The year began with a currency crisis among developing economies in Asia, followed by a breakout of civil conflict in Ukraine. Both events have subsided somewhat, but further headwinds exist in the months to come.

More recently, the Chinese economy has slowed down, and fears have spread that Russia's intervention in Crimea could lead the country into recession. iShares MSCI Emerging Markets Index ( EEM 0.40% ) has staged a solid comeback in March, but more strife could halt the move higher. 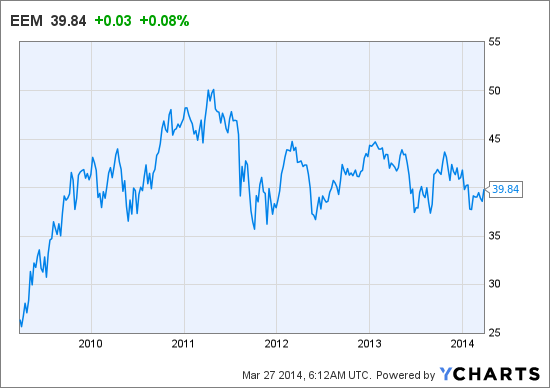 China's economy may be the most influential on emerging market health given its size and impact on the global economy. Investors are aware of China's decelerating GDP growth rate in recent years as the country transitions away from being driven by investment and exports. The move to a more sustainable economic model fueled by domestic demand and consumption may not pay off in the next year, but it could have a huge effect in the next 10 to 20 years .

The cooling Chinese economy, alongside signs that policymakers will not step in every time a corporate loan goes bad, however, has banks tightening lending criteria. This has left residents of China becoming more cautious and risk-averse. China's first domestic bond default occurred in early March when solar equipment maker Chaori Solar missed its payment and regulators refused to step in, driving their message home in very real terms. Many analysts likened it to the collapse of Lehman Brothers investment bank in 2008, when the U.S. government didn't rescue the struggling company, risking the safety of the entire financial system by not acting. It is a hard pill to swallow, but in both cases policymakers had a direction they wanted the economy to go in, and they were willing to take risks to achieve that goal.

The move is a wake-up call for both lenders and investors eyeing the Chinese economy. There is a chance that the country will not meet its target growth of 7.5% in 2014, which could dampen investor sentiment surrounding the world's second-largest economy. As China moves away from heavy spending to a more balanced approach, its demand for exports out of developing countries could fall, causing an investment in emerging market equities to become that much riskier.

Similarly, the economic impact of Russia's intervention in Crimea could weigh on growth this year, slowing the Russian economy to just a 1.1% increase in 2014. Even if the West loosens its trade sanctions, the World Bank warned that Russia could fall into a deep recession. Leaders of the Group of Seven major industrialized nations also agreed this week that it would hold off on tougher sanctions until Russian President Vladimir Putin takes further action to destabilize Ukraine or other surrounding countries .

The real risk lies in an increase of political tension among the post-Soviet states, possibly leading to further sanctions. Although widespread violence has yet to break out, the more the conflict is in the public eye, the increased likelihood that investors lose confidence in the region and continue to pull foreign investments out of Russia. Market Vector Russia ETF Trust ( RSX -1.08% ) has been a main target of global short-sellers looking to profit from the region's instability. The World Bank report on the Russian economy showed that Moscow was already set to pay a large price in economic activity due to disruptions caused by its invasion of Ukraine .

Obama has made it clear that he sees no reason for military intervention in Russia just yet, which gives those currently invested in emerging markets some relief. The lack of quick resolution by the West in the region, however, is disconcerting. As developed economies appear to improve and plan to ease off stimulus spending, issues in major developing economies, such as China and Russia, could dampen the positive spirit. Buying emerging assets at cheap valuations could be a great investment in the long run; it is just difficult to see major price appreciation taking place amid the current environment.