These five nations have overcome the recession and prospered. But what makes them wealthy while other countries struggle?

More than five years after the recession, the world's economic recovery is a mixed bag.

Many top economies in Europe still struggle with high unemployment and flirt with dipping back into recession, while Japan, the United States, and other global leaders fight off burgeoning debt loads. For some countries, growth has been just a dream over the past few years -- and their citizens are left wondering where the wealth has gone.

For the world's richest nations, however, the recovery has added a boost to their already surging economies, backed by strong commercial sectors, bountiful resources, or other factors. But just who is making out the best in the post-recession world? Let's take a look at the globe's five richest countries -- as ranked by the International Monetary Fund's 2014 estimates for GDP per capita, adjusted for purchasing power parity -- and see why these leaders are so successful.

5: Norway, $56,222 per-capita GDP
Scandinavia's wealthiest country is also its most resource-rich. Norway has fostered an economy that has weathered the recession well: The country boasts a mere 3.4% unemployment rate, far below the euro area's rate of 11.5%, thanks largely to its rock-solid oil industry. The nation is the largest producer of oil on the continent, and that advantage has helped the country put together a sovereign wealth fund of $860 billion. According to IMF estimates, Norway's economy overall has swelled by more than 12.2% between 2009 and 2013, marking an incredibly successful comeback compared to struggling European economies like Spain and Italy.

But will Norway's oil be enough for its people's future? Concerns are mounting over just that. According to Reuters, the country's central bank foresees up to a 10% drop in oil- and gas-related investments in 2015 and a further decline the following year. Oil prices have largely stabilized despite turbulence in the Middle East, and growing costs for energy firms have companies thinking with caution. 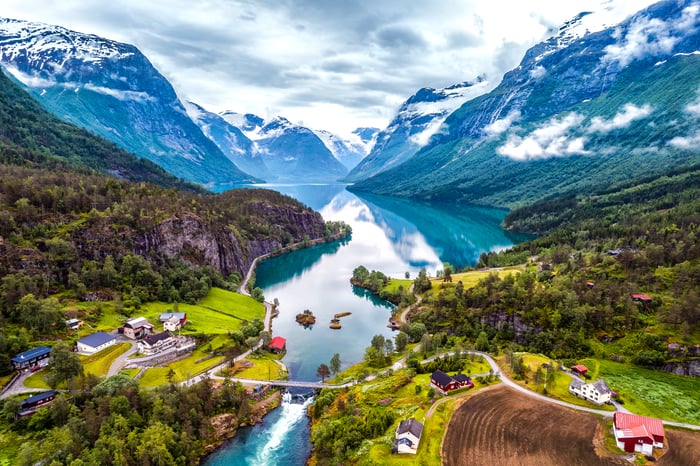 Statoil (EQNR 2.31%), the country's largest state-owned oil giant, has aimed to slash up to 15% of its 2013 operating costs by 2020 in order to keep its profit margins growing ahead of mounting costs. The plan has pleased investors so far, and Statoil's shares have jumped more than 13% over the past year. But the company recently slashed high-cost plans, halting progress on a Canadian oil-sands project in late September for at least three years because of cost and shipping concerns, and political volatility in Eastern Europe also has investors -- and economists -- watching closely.

The IMF has nonetheless painted an optimistic picture of Norway's growth potential, projecting that the country's per-capita GDP on a PPP basis will grow by more than 15% between 2014 and 2019. But the organization also foresees faster-growing economies -- such as the U.S. -- catching up to and surpassing Norway's wealth by then. This country's spot among the top five richest countries may not be safe for long.

4: Brunei, $56,285 per-capita GDP
Count the tiny Southeast Asian nation of Brunei as another beneficiary of oil and gas. In 2012, oil and gas activity powered more than half of the country's overall GDP, with significant exports to Japan, South Korea, China, and Australia in particular. Brunei has inked a recent deal with neighboring Malaysia to continue offshore exploration in a move that should only help sustain the wealth of this nation, whose population is a mere 415,000 people, as of 2013 estimates.

Whereas Norway is worrying about nearby Russia, Brunei has benefited from the rise of the local superpower, China. Although China has sparred politically with its Asian neighbors in recent times, Asia's largest economy has secured deeper ties with the Association of Southeast Asian Nations, an economic and political bloc of which Brunei is a member. China has looked to bolster trade with ASEAN and increase its investment in Southeast Asia. Brunei is also currently participating in the ongoing talks surrounding the Trans-Pacific Partnership, a proposed trade partnership that includes the U.S., Japan, Canada, and other leading Pacific economies.

While the country's reliance on energy for the majority of its wealth ties Brunei to the oil and gas markets, the nation's small size and growing ties to its neighbors bode well for its economic future. 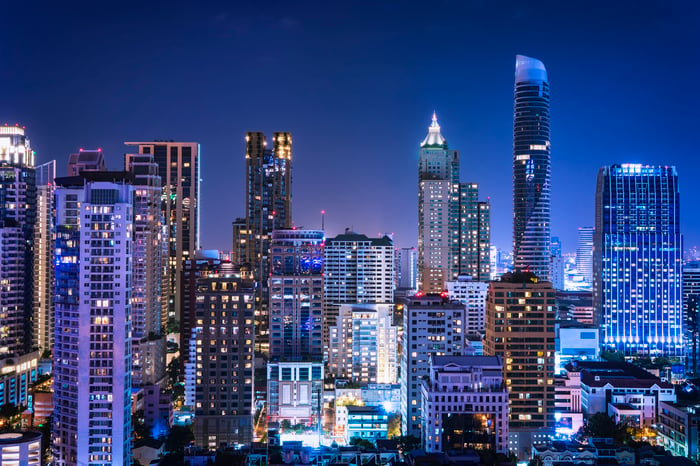 Brunei isn't the only ASEAN member to make the list. Fellow member Singapore ranks third in the world by per-capita GDP, and the recession has hardly slowed this powerhouse down: IMF data notes that Singapore's GDP, balanced for purchasing power parity, has jumped by more than 37% between 2008 and 2013, and the World Economic Forum ranked the country's economy as the globe's second-most competitive in 2014, ahead of both the U.S. and Japan and behind only Switzerland.

Unlike the prior two countries on this list, however, Singapore is not fueled by natural resources. The city-state has emerged as a global financial hub and is perfectly positioned to continue taking advantage of the rise of Chinese and Southeast Asian wealth in coming years. Singapore has also pushed into electronics and tech, and even with exports projected to fall in 2014, the country is still reeling in foreign investment. Even with weaknesses both domestic and foreign, the country's economy is projected to rise by 3.3% this year.

If the IMF is any indication, that rise won't stop anytime soon, either. The organization foresees the country's per-capita GDP blooming by another 25% between 2014 and 2019, and if the country can continue making inroads into such areas as biotechnology and data centers in coming years, expect Singapore's citizens to hang on to their wealth for a long time to come.

2: Luxembourg, $79,976 per-capita GDP
Tiny Luxembourg, sandwiched between France and Germany, has had a rough ride through the recession despite its high ranking among the world's richest nations. IMF data notes that the country of just over 540,000 people has seen its per-capita GDP decline by more than 2% since 2008 -- but better days may be just over the horizon despite Europe's ongoing slump. Luxembourg's official statistics office projects 3% GDP growth this year, with even greater gains in coming years.

One of Luxembourg's biggest secrets to avoiding Europe's malaise, however, is its low taxes -- and status as a tax haven. The country offers the second-lowest overall corporate tax rate among EU and European free-trade-agreement-bound countries, according to the Financial Times, and it rakes in more than 10% of global foreign direct investment. That has encouraged banks from around the world to set up shop in one of the smallest countries in Europe, and it has benefited Luxembourg citizens greatly. Major companies have set up subsidiaries in the nation, and some corporations, such as steel giant ArcelorMittal, have established their headquarters in Luxembourg.

In select cases, however, Luxembourg's favorable tax rulings have also drawn the ire of regulators. The European Commission this month moved to launch a probe into rumors that Amazon received favorable tax terms courtesy of Luxembourg dating back almost a decade.

It's the latest move by European regulators to enforce competition and taxation standards, and more comprehensive rulings might spell trouble for Luxembourg's business-friendly tax laws. Still, Luxembourg's economy for now is on course to outpace Europe's malaise, with the IMF projecting per-capita GDP growth of more than 10% between 2014 and 2019.

1: Qatar, $96,992 per capita GDP
The richest country in the world isn't just rich: It's poised to widen its lead on the runners-up in the near future. 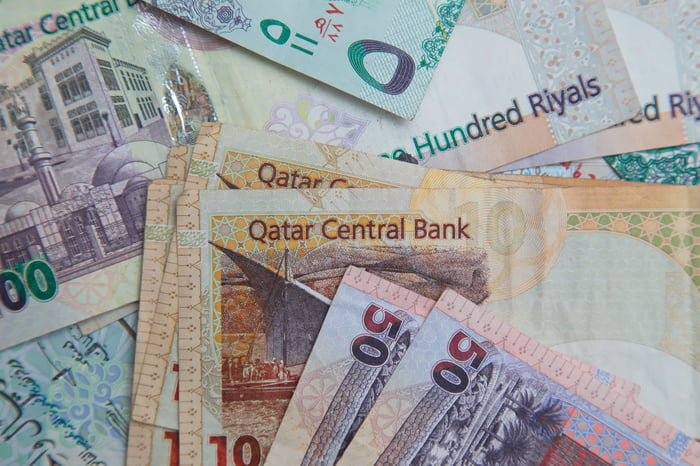 Qatar, home to 1.8 million people, is the Middle East's wealthiest country and the region's top nation in terms of human development. While Qatar is in many ways the flagship nation of the region -- it's wealthy and internationally recognizable, and it will host the FIFA World Cup in 2022 -- the country's economy has still relied on energy to power its rise to the top. According to the U.S. Energy Information Administration, Qatar's natural gas and oil industry fueled more than half of the country's GDP in 2012, with the nation raking in $55 billion from net oil exports alone that year. The country is the global leader in liquefied-natural-gas exports, and it boasts more than 25 billion barrels of proven oil reserves.

Don't expect the country to drop off in energy exports anytime soon. Qatar has suspended new project development in its lucrative North Field natural gas range in its efforts to develop long-term energy production, and the nation continues exploration in both oil and gas. The country has also courted leading international energy corporations in its bid to continue energy exports, as seen in agreements such as state-owned Qatar Petroleum International's deal with ExxonMobil last year to construct a $10 billion LNG export facility in Texas.

Meanwhile, Qatar has pushed to diversify its economic growth engine. The country has brought in foreign workers to bolster its fledgling construction sector as land prices skyrocket, and it has seen growth in finance- and tourism-related business as well. It's a boon for Qatar's population. The IMF projects that the country's per-capita GDP will jump by more than 22% between 2014 and 2019, eclipsing $118,000 by the end of the decade. Even if Qatar's energy business recedes somewhat, this country is making all the right moves today to flourish in years to come.

Will the global economy keep the recovery moving?
Missed the United States on this list? The U.S. just barely missed out, ranking seventh (when including territories such as Hong Kong) on the IMF's list, with a projected 2014 per-capita GDP of nearly $55,000 when adjusted for purchasing power parity. But the recovery isn't over yet, and risks still loom over the global economy at large -- even for the richest nations. The IMF this month cautioned that economic growth could come in below expectations as the U.S. recovery churns on, Europe struggles to stave of contraction, and Japan deals with crippling levels of public debt. If there's one thing the richest countries in the world need to keep in mind, it's that the world economy can bring about change fast.

Dan Carroll has no position in any stocks mentioned. The Motley Fool recommends Amazon.com and Statoil (ADR). The Motley Fool owns shares of Amazon.com. We Fools may not all hold the same opinions, but we all believe that considering a diverse range of insights makes us better investors. The Motley Fool has a disclosure policy.