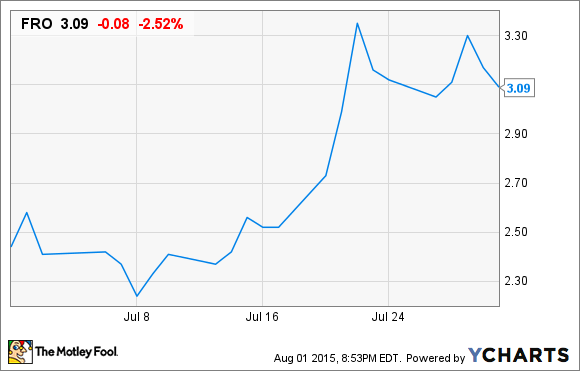 Shares of Frontline (NYSE:FRO), a tanker company that's primarily focused on the seaborne transportation of oil and oil products, skyrocketed 27% in July based on data from S&P Capital IQ on the heels of improved charter pricing and an unlikely deal between two nations.

Although there was no blatantly obvious news that would signal why Frontline stock surged higher, if you dig a bit below the surface it's easy to find a few reasons why investors were excited in July.

First, charter day-rates have been on the rise for Frontline's two primary types of shipping vessels: very large crude carriers, or VLCCs, which carry in excess of 200,000 tonnes deadweight (TDW), and Suezmax tankers, which carry between 120,000 and 200,000 TDW. Based on data from Konig & Cie., VLCC 1-year charter estimates have risen by almost 15% since March, while Suezmax tanker 1-year charter rates are up about 8% over that same period. Higher charter rates could signal improving demand, and obviously better margins for tankers like Frontline.

Secondly, a potential deal between Iran and the United States regarding the former's nuclear program could ease tensions in the Middle East and allow Iran to boost its crude production capacity over time. If Iran hits the market with more oil, Frontline, whose VLCCs primarily serve the Middle East, could be set for an uptick in demand.

The big question to ask now is whether or not this small-cap stock can hang onto its gains from July, or if this ship sailed a long time ago.

The truth is that question is very difficult to answer, but if you are going to be an investor in Frontline, you need to have an antacid close by.

The two big concerns for Frontline are its debt levels and weaker oil prices. An at-the-market stock issuance in the first quarter helped alleviate some of its immediate debt concerns, but the fact remains that expanding and modernizing its fleet is a very capital intensive process. Also, with crude prices approaching multi-year lows once again, we could see a drop-off in production that could threaten demand and charter rates beginning in 2016 and beyond.

On the flipside, Frontline surprised investors with a robust first-quarter profit, and average daily charter rates have been moving in the right direction. Furthermore, the tanker market hasn't been glutted with new vessels -- just five Suezmax and four VLCCs were introduced to the market last quarter from Q4 2014 -- which provides additional protection to charter rates.

If my arm were twisted I'd suggest your smartest bet is to keep to the sidelines on Frontline as the weakness in underlying crude prices could upset the uptrend in charter rates and demand for Frontline's VLCCs in the Middle East.