Please ensure Javascript is enabled for purposes of website accessibility
Log In Help Join The Motley Fool
Free Article Join Over 1 Million Premium Members And Get More In-Depth Stock Guidance and Research
By Sean Williams - Sep 2, 2015 at 10:03AM 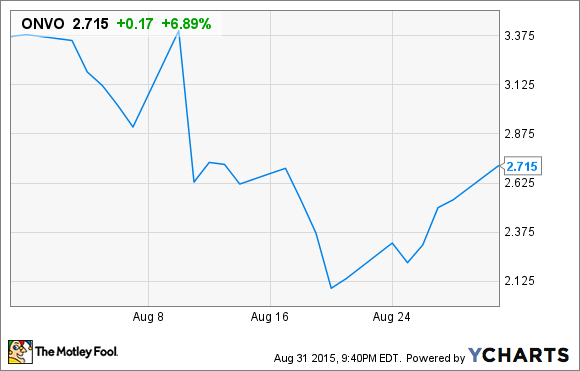 Shares of Organovo Holdings (ONVO -3.46%), a synthetic tissue engineering company focused on bringing innovative diagnostic solutions to the pharmaceutical and clinical research fields, tumbled 19% in August, based on data from S&P Capital IQ, primarily as a result of its first-quarter earnings results.

For the quarter, Organovo reported total revenue of $306,000, of which $207,000 came from the sale of its ExVive 3D Human Liver Tissue assay. Overall, total revenue more than tripled on a year-over-year basis. However, due to an increase in selling, general, and administrative expenses, as well as a dramatic boost of $1.3 million in research and development expenses on a year-over-year basis, Organovo's net loss widened to $8.5 million, or $0.10 per share, from $6.4 million, or $0.08 per share, in the year-prior period. Wall Street had been looking for a slightly narrower loss of $0.09 per share.

Additionally, Organovo announced that it ended the quarter with $86 million in cash and cash equivalents despite seeing its cash outflow nearly double to $6.3 million from $3.4 million on a year-over-year basis. Dilutive common stock offerings remain the primary means through which Organovo raises capital.

Following the company's earnings results, Cantor Fitzgerald promptly downgraded Organovo to "hold" and slashed its price target from $6 to $3.50.

Lastly, the stock market correction has done Organovo shareholders no favors. Because clinical-stage companies and those with newly-launched products aren't valued on traditional fundamentals, they're more prone to violent swings when emotions and projections come into play.

The big question now is whether or not Organovo stock has any shot at a rebound.

On one hand, Organovo offers a diverse pipeline of exciting diagnostic products. The potential for its synthetic liver tissue assay, and its developing kidney tissue assay, is enormous. In theory, the company could speed up the drug development process by testing drugs' effects on synthetic livers or kidneys, saving pharmaceutical and clinical research entities a boatload of money.

However, what ExVive 3D looks like on paper versus what we're actually seeing based on Organovo's results are two different things. We're less than three months away from the one-year anniversary of the ExVive 3D launch, and the best Organovo can show is a scant $207,000 in quarterly sales? That's a worrisome sign from a company that is expected to see its cash outflow increase as it moves into other study indications.

So the deal is this: Organovo has some very cool technology that's capable of transforming the medical landscape, but it's far from a guarantee to succeed. If I were a betting man, I'd suggest there could be more pain ahead for shareholders.