Please ensure Javascript is enabled for purposes of website accessibility
Log In Help Join The Motley Fool
Free Article Join Over 1 Million Premium Members And Get More In-Depth Stock Guidance and Research
By Sean Williams - Sep 5, 2015 at 7:11AM 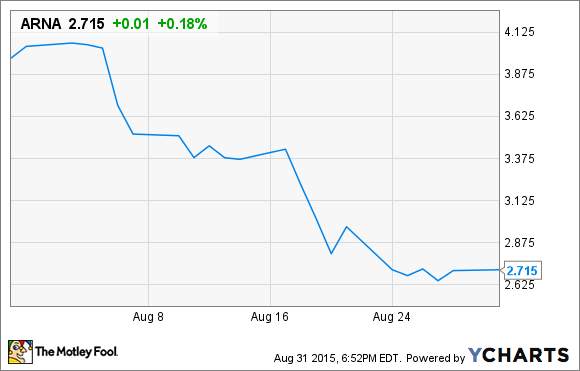 Shares of Arena Pharmaceuticals (ARNA), the biopharmaceutical company best known for weight control management drug Belviq, lost a third of their value (33%) in August, based on data from S&P Capital IQ, after the company announced disappointing second-quarter earnings results.

To be clear, the ongoing stock correction hasn't been a good thing for Arena or the broader biotechnology sector, which has arguably been priced at a premium to other sectors of the market. But the main factor pushing Arena's stock lower has been its second-quarter earnings, released on Aug. 5.

For the quarter, Arena Pharmaceuticals announced that it produced $9.2 million in revenue, down 28% from the year-ago period, and that its loss ballooned to $26.8 million, or $0.11 per share, after delivering a $0.03 per-share profit in the year-ago quarter. The revenue drop was primarily related to collaboration revenue -- the company received $5.3 million from Eisai in 2014, which wasn't there this time around. Arena's share of Belviq revenue rose to $4.29 million from $3.53 million in the year-prior period.

On a comparative basis, Arena actually lost $0.03 per share less than what was expected, but sales of Belviq continue to disappoint. In fact, all three weight control management drugs now on the market are moving just a fraction of what was expected from Wall Street just a few short years ago.

The possible good news for Arena is that it has produced encouraging results in other areas of its pipeline beyond weight management. For example, APD334, an autoimmune disease therapy that's primarily being targeted at ulcerative colitis, demonstrated a 69% lymphocyte count reduction in patients' blood in a phase 1b study from earlier this year. Of course, as Foolish biotech guru Brian Orelli reminds us, this was a study of healthy volunteers, and the dynamics could change drastically when APD334 is tested on patients afflicted by ulcerative colitis or other possible indications.

The bigger issue for Arena remains its valuation and dwindling cash. Don't get me wrong -- Arena still has $216.7 million in cash and cash equivalents as of the end of the latest quarter, but its valuation, even following the drop, is still around $650 million. That's an awful lot to pay for a weight control drug that has essentially flopped, especially considering that Arena is years away from pivotal studies that could yield a boost in revenue. For now I'd suggest investors keep their distance.