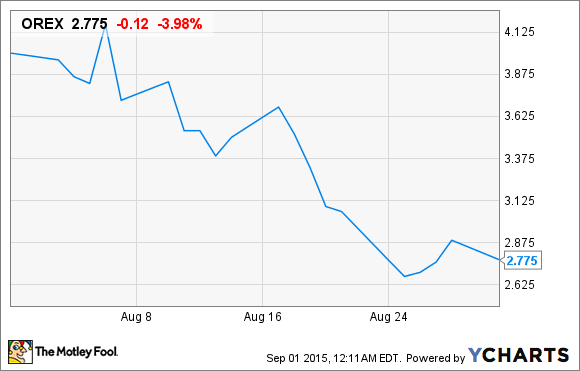 Shares of Orexigen Therapeutics (NASDAQ: OREX), a biopharmaceutical company primarily focused on developing therapies for weight control management, slimmed down by 31% in August, based on data from S&P Capital IQ, after the company reported weaker-than-expected second-quarter earnings results and restated its collaboration agreement with Takeda Pharmaceuticals.

For the quarter, Orexigen announced (based on IMS Health statistics) that prescriptions of weight-loss drug Contrave grew 47% from the sequential first quarter to 172,050. Overall, Orexigen recorded $5.2 million in revenue, including $3.1 million tied to the $16 million in total sales attributed to Contrave in Q2. This increase in revenue, coupled with only a small increase in year-over-year operating expenses, helped push Orexigen's net loss down to $22.5 million, or $0.18 per share, from $24.5 million, or $0.21 per share, in the year-ago quarter. By contrast, Wall Street was expecting a narrower loss of just $0.17 per share.

In addition to reporting a wider-than-expected loss, Orexigen announced an amended collaboration agreement with Takeda. Orexigen will now be responsible for covering the first $210 million in costs associated with the long-term cardiovascular outcomes trial set to begin later this year for Contrave, with an expected readout in 2022. Any costs beyond $210 million will be split equally by the partners. If you recall, the Food and Drug Administration squashed the continuation of the Light Study (which was nearing completion) because Orexigen disseminated seemingly positive information from the study that could have altered the results of the trial. Because there are no mulligans in biotech, Orexigen now has to foot the majority of the bill.

The question investors need to ask is whether Orexigen shares are a bargain after their 31% tumble, or whether they should still be avoided.

On one hand, Contrave sales have ascended at a much quicker pace than some of its rivals', which is a decent sign in my book. But on the other hand, Orexigen is sharing revenue with Takeda, and it's unlikely that the company has a shot at profitability anytime soon. This means Orexigen's $175.1 million in cash, cash equivalents, and marketable securities could continue to shrink. Furthermore, with its long-term cardiovascular outcomes study now years away from completion, Orexigen will have one heck of a time differentiating its weight-loss drug from its peers'.

Although I wouldn't rule out the possibility that Orexigen will eventually be a success, I'd avoid this stock for the time being.