Shareholders of Genworth Financial headed for the hills after its weaker-than-expected second-quarter results. Is there any hope for a rebound? 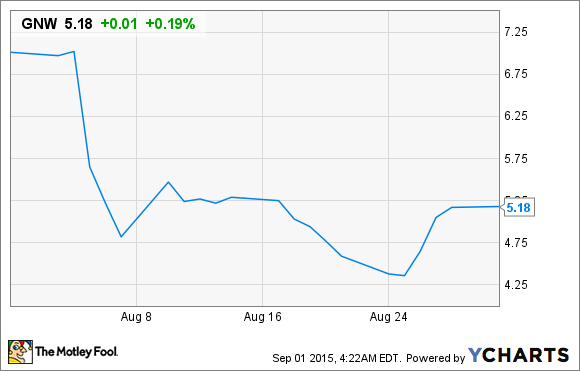 Shares of Genworth Financial (GNW -0.24%), a provider of a variety of financial and retirement products -- mainly life insurance, mortgage insurance, and fixed annuity products -- were slammed in August, losing 26% of their value according to S&P Capital IQ, after the company reported disappointing second-quarter results.

For the quarter, Genworth Financial delivered $2.16 billion in revenue, a slight drop from the $2.19 billion in the year-ago period, as it witnessed a decline in net investment gains, stagnant net investment income tied to historically low lending rates, and a 1% decline in premium revenue. On the bottom line, Genworth reported a $0.35 per share loss, but this was inclusive of a $306 million loss tied to the divestiture of its lifestyle protection insurance business. Sans this one-time cost, Genworth delivered net operating EPS of $0.24.

On a comparable basis, Wall Street had been looking for Genworth to generate $2.39 billion in revenue and produce a profit of $0.26 per share, meaning it was the dreaded double-miss. This shouldn't come as too big a shock for longtime Genworth shareholders, as it represents the company's fourth EPS miss in the past five quarters. In response, Raymond James Financial downgraded Genworth from "strong buy" to "outperform."

There are a number of factors working against Genworth Financial that are worth closely monitoring. For instance, insurers are among the biggest beneficiaries of interest rate hikes, since it means more in the way of investment income. If the Federal Open Market Committee continues to hold off on raising rates, it means minimal opportunity for investment gains for companies like Genworth.

So what's next for Genworth? With a number of weaker-than-expected quarters under its belt recently, investors are looking for Genworth to continue to cut costs or downsize its operations. Although the company remains profitable, the clearly cheap valuation implies skepticism among investors that Genworth's business model can thrive over the long term.

Following a credit rating cut into junk territory last year, it's become clear that Genworth needs to raise capital simply to appease investors, lower its outstanding debt, and secure its long-term operating future. As Genworth's credit rating falls, it makes it more difficult for the company to underwrite new business. It remains to be seen if Genworth can truly turn things around, and as such, this stock continues to remain a buy only for those investors with a very high appetite for risk.