When a company's debts get out of hand and it is consistently not generating enough revenue to pay its bills, that company is generally faced with two choices: shut down operations and call it quits or file bankruptcy, attempt to reorganize, and continue operating. Over the years, many U.S. companies have taken advantage of the latter option and filed for Chapter 11. Named for Chapter 11 of the U.S. Bankruptcy Code, businesses and individuals can restructure their existing debt by filing Chapter 11. During the bankruptcy process, the debtor will attempt to reorganize its debt and satisfy its creditor obligations while continuing to operate. 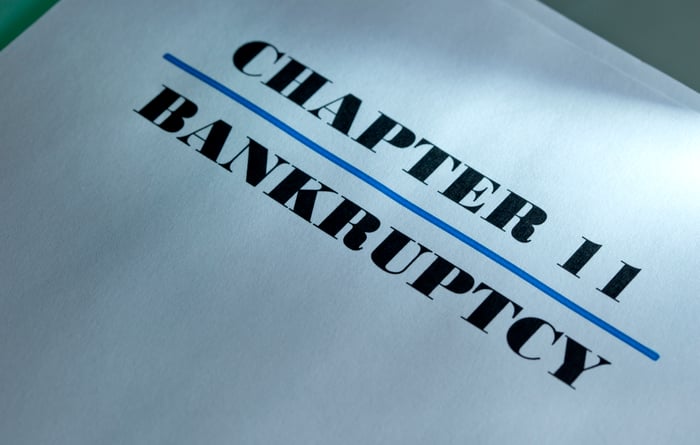 Though Chapter 11 is available to both businesses and individuals, it's an option most commonly exercised by larger companies and corporations. When a company files for Chapter 11, it must submit a bankruptcy petition in court and then file a detailed schedule of all of its current liabilities and assets. As part of the process, it must also file a disclosure statement with details of its financial standing and operations, as well as a plan of reorganization.

The plan of reorganization is a proposal as to how an existing debtor plans to repay its creditors. Creditors are given priority based on the type of debt they hold. Secured creditors, like banks, typically get paid first in a Chapter 11 bankruptcy, followed by unsecured creditors, like bondholders and suppliers of goods and services. Stockholders are typically last in line to get paid.

Not all creditors get repaid in full under a Chapter 11 bankruptcy. While some recover 100% of what they're owed, others may only wind up getting a certain percentage. Creditors are given the right to vote on a company's proposed plan of reorganization, and the court must approve the plan in order for it to go through.

During a Chapter 11 bankruptcy, the debtor may continue to operate. However, it is prohibited from making certain financial decisions without the approval of the bankruptcy court. Additionally, creditors are barred from suing Chapter 11 debtors for the money they're owed during the bankruptcy process.

A Chapter 11 bankruptcy is known as a reorganization bankruptcy because the goal of it is to continue operating, restructure existing debt, and move forward. A Chapter 7, by contrast, is known as a liquidation bankruptcy. In a corporate Chapter 7 bankruptcy, the goal is not to emerge as a more financially healthy business, but rather to shut down and sell off existing assets to repay creditors. While Chapter 11 is most frequently seen in large corporations, it's common for both companies and individuals to file Chapter 7.

The goal of filing for Chapter 11 is for a company to continue operating as a more financially sound entity. While some Chapter 11 cases do result in a successful reorganization, others inevitably wind up getting converted to Chapter 7 liquidations.

For stockholders, a Chapter 11 filing can be an unwelcome piece of news. That's why it's important for investors to track the finances of the companies they're invested in. Once a company files for Chapter 11, its stock price is almost guaranteed to fall, and there's no telling what its existing stock will ultimately be worth under its plan of reorganization.