Joining several other marijuana stocks in recently fixing their upcoming quarterly release dates, KushCo Holdings (OTC:KSHB) has put its Q4 and full-year fiscal 2019 on the calendar. The producer of cannabis-related services and accessories will publish the figures for those periods on Thursday, Nov. 7, after market close. KushCo managers will also host a conference call to further discuss the quarter and year.

The company's Q4 terminated at the close of August. Since then, its shares have lost almost 55% of their value. Although some of this could be attributed to general investor malaise over chronically unprofitable marijuana stocks as a class, there is a specific reason they might be selling off KushCo. 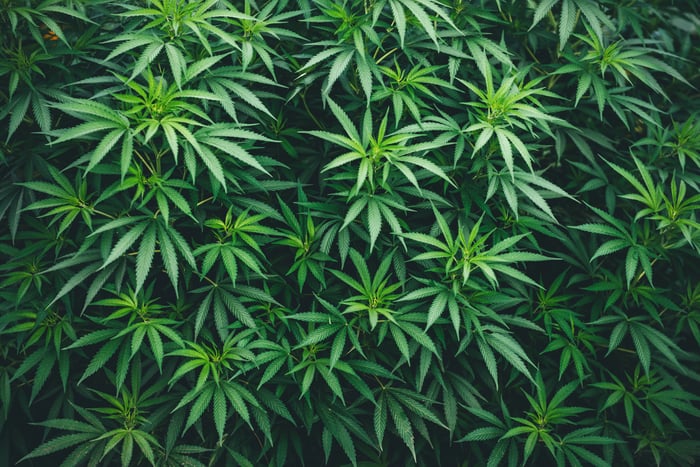 Last month, KushCo floated a direct public offering (DPO) of its stock, a move that was anticipated to raise more than $30 million in gross proceeds. Although publicly traded cannabis companies frequently sell stock to shore up their finances, this flotation was notably dilutive -- the new shares represented more than 19% of the total outstanding.

This doesn't count stock potentially derived from warrants issued alongside shares in the flotation. If all warrants were exercised, that number would balloon to 29%. It's hardly surprising that the company's share price was hit badly following the announcement of the DPO; shareholders typically don't like dilution, as it tends to sap the value of the stock they hold.

KushCo, typically for the nascent marijuana industry, is rarely profitable despite posting significant recent gains on the top line. In the company's Q3, its net revenue expanded by more than 220% on a year-over-year basis. That didn't pull it out of the red in terms of its net result, however -- in fact, its loss deepened slightly over that stretch, to $10.6 million ($0.12 per share) from the year-ago deficit of $9.2 million.

Those who follow the stock are not expecting a sudden and dramatic turnaround into the black. According to The Wall Street Journal, on average, analysts are projecting another $0.12-per-share net loss for Q4.

With KushCo announcing its release date, November's calendar page is getting crowded with marijuana stocks that will report their latest figures. Just before KushCo made its announcement, peer Curaleaf said it would provide its Q3 of fiscal 2019 results on Nov. 19. And shortly prior to that, Aleafia Health announced its own Q3 2019 numbers would be made public on Nov. 12.