Financial figures across the board saw significant improvements.

Fourth-quarter revenue grew to $77 million, a substantial increase from the mere $100,000 reported in Q4 2018. Total annual revenue came in at $289.6 million, while last year's income came in at a much smaller $3.1 million. While this surge is mainly due to collaboration agreements with Vertex Pharmaceuticals as opposed to product sales, it's still an impressive increase considering analysts had expected just $45.2 million for the quarter. 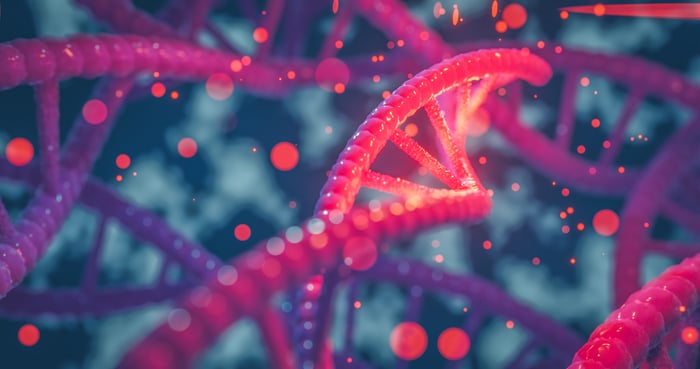 Other financial metrics, such as CRISPR's cash position, have improved as well. By Dec. 31, cash and cash equivalents grew to $943.8 million, a 106.7% increase from the $456.6 million reported last year. The biotech company is also now reporting a net profit thanks to this revenue hike. Net income came in at $30.5 million, whereas last year CRISPR reported a net loss of $47.6 million in its 2018 fourth quarter.

CRISPR is developing four main treatments. CTX001 is a treatment for patients with sickle cell disease and transfusion-dependent beta thalassemia. Both of these are genetic blood disorders that impact the blood's ability to transport oxygen throughout the body.

The company's three other drugs, CTX110, CTX120, and CTX130, are types of cancer treatments known as CAR-T therapies. While other healthcare companies are developing their own CAR-T drugs, these types of therapies tend to be quite expensive. CRISPR's technology could make the development process for these types of drugs much cheaper than their competition.