Please ensure Javascript is enabled for purposes of website accessibility
Log In Help Join The Motley Fool
Free Article Join Over 1 Million Premium Members And Get More In-Depth Stock Guidance and Research
By Daniel B. Kline – Updated May 21, 2018 at 1:40PM

The number has a hit a new high, and there's no reason to believe it won't keep going up.

Weddings can be both happy days for brides, grooms, and their families, and days filled with an enormous amount of stress.

In addition to any pre-marriage jitters, concerns over who's upset about where he or she might be sitting, and worries that Uncle Jack may have a few too many at the reception, many marrying couples carry the burden of worrying about cost. Weddings can be expensive, and the bar for what an average one costs keeps getting pushed higher.

The average American now spends more money getting married than at any point in the past decade (and likely ever). It's a number that has steadily risen, according to The Knot's 2016 Real Weddings Study, a survey of nearly 13,000 actual brides and grooms across America. 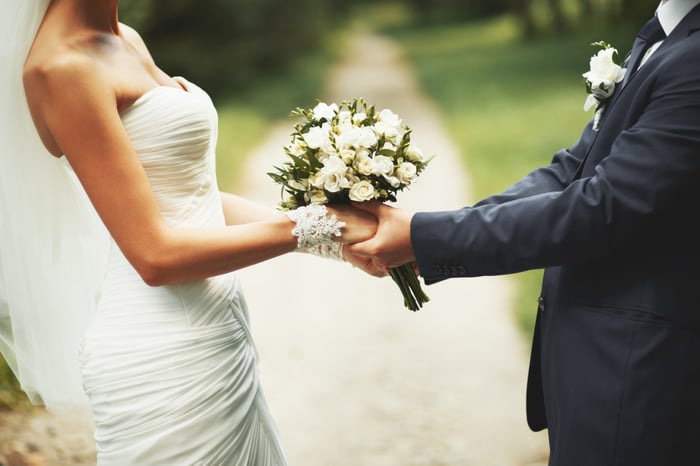 Getting married can, but does not have to be, expensive. Image source: Getty Images.

How much does the average American wedding cost?

The Knot's 10th annual version of its Real Weddings Study found that the "overall cost of a wedding has soared to new heights, with a national average of $35,329 (and that's not including the honeymoon)," wrote Maggie Seaver.

Of course, with this number being average, costs can vary greatly depending upon location. "Tying the knot in, say, Manhattan could cost an average of $78,464, while an Arkansas wedding will average at $19,522," wrote Seaver.

What are people spending all that money on?

Weddings have actually gotten smaller, with average guest lists dropping to 141 in 2016, down from 149 in 2009, according to the study. Costs have gone up for the average American wedding, however, because more money is being spent on each guest. That number, The Knot found, rose to $245, an increase of 26% from the $194 being spent per guest in 2009.

Some of that extra money goes to creating "total personalization and unforgettable guest experiences," the study found. In addition, The Knot showed that there has been "an overall increase in spending across all reception categories in 2016, including catering, cake, flowers, photographer, entertainment and the venue itself."

The venue for the reception (including catering) actually takes the largest share of the average American wedding budget, coming in at $16,107. That breaks down to $10,011 for meals and drinks ($71 per guest for the average 141 guests) while the rest pays for the actual location. People spend an average of just over $2,500 on flowers, while the photographer gets an average of $2,783, and a videographer comes in at just under $2,000.

It doesn't have to cost this much

These are average costs, but it's worth remembering that a couple that breaks the bank creating a unique wedding experience ends the day no more married than a couple who gathered friends and family around a few boxes of pizza. Of course there's a happy middle ground, between a lavish affair where the cake costs more than many people pay in rent for a month, and one where a box of Twinkies gets passed around a discount wedding chapel.

It's possible to have a lovely, classy wedding without hitting these averages. It's important for anyone getting married (and whoever may be helping pay for the wedding) to remember that just as with any spending, it's not worth compromising your future financial health for one day -- even one really important day.