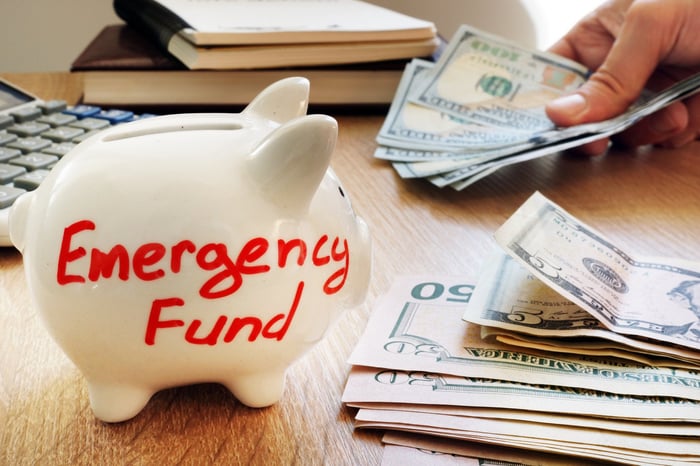 There's a reason I make a point to stash at least six months' worth of living expenses in a savings account: You never know when surprise bills might come your way. Through the years, I've had to tap my emergency fund for different purposes -- a brief stint of unemployment, random things breaking down in my home, or needing a new car after a minor accident caused my first vehicle to self-destruct. In fact, these are some common reasons to use an emergency fund. But here are a few surprising ways that money has come in handy for me.

1. A medical emergency for my old dog

My last dog had a lot of health issues in his old age, but at one point, he went from healthy to sick pretty much overnight. I hadn't been saving extra to cover his care because, well, his health turned so quickly. So when he wound up needing a day of fluids and treatment at the vet's office, I wasn't prepared for the $600 bill that followed. Thankfully, I was able to tap my emergency fund to cover that expense, and from then on, I started padding that account in case more pet issues arose (which, unfortunately, they did).

2. Travel to see my father post-surgery

About 12 years ago, my father needed heart surgery out of the blue. I wanted to be there to help my mom and be with him in the days and weeks that followed. And even though I only live about an hour away from my parents, because of the toll roads and bridges that exist between my house and theirs, it costs about $50 just to make the trip. Normally, I'd go see my parents once or twice a month. Following my dad's surgery, I was driving in four or five times a week. All of those extra gas fill-ups and tolls would've put a strain on my budget had I not had my emergency fund to dip into. I wound up withdrawing a few hundred dollars to avoid feeling squeezed.

I've always been a firm believer that an emergency fund should cover unplanned bills only, so normally, a wedding isn't something I'd use mine for. Rather, I'd sock away money in advance to cover wedding-related expenses, like travel or gifts. But years back, two friends of mine decided to tie the knot abroad and gave their guests only a month's notice. It was a small ceremony with just a handful of people, and to be fair, my friends said they'd understand if some of us couldn't make it. But I wanted to be there to support them, so in the absence of having time to save, I instead opted to withdraw some money from my emergency stash to swing the flight and accommodations.

The money that sits in my emergency fund is money I can't invest. And given what interest rates look like these days, it's fair to say that I'm earning basically nothing on that cash while it hangs out in savings. But despite that downside, I still believe in having a solid emergency fund. You just never know what random bills the universe might throw at you, and I'd rather be prepared than stressed.