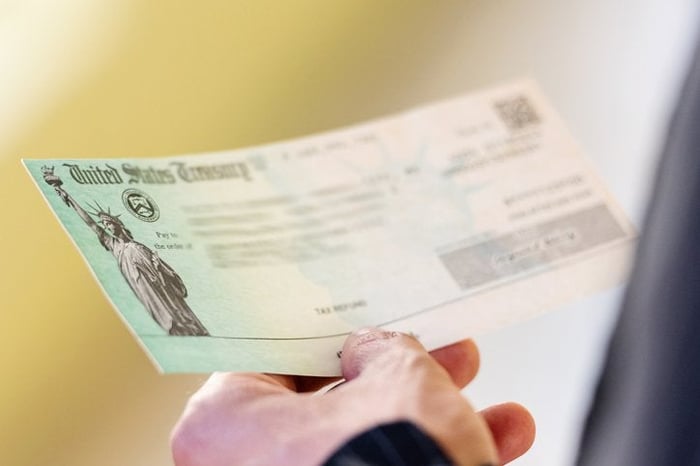 
After months of negotiations, lawmakers have finally settled on a second coronavirus relief bill. And thankfully, that bill includes a round of
direct stimulus checks.

The news isn't totally great -- while the CARES Act gave $1,200 stimulus payments to eligible adults, the second round will max out at $600 per adult. Eligible dependents will be entitled to $600 as well.

Given the number of Americans who have grappled with income loss since March and have exhausted their savings accounts, the big question remains: When will those stimulus payments actually go out? Here's what we know so far.

Once the new relief deal gets signed into law, experts say it will take the IRS a minimum of two weeks to get that cash into individual bank accounts. However, Treasury Secretary Steve Mnuchin stated that payments could go out by the beginning of next week if the bill becomes official soon enough, which would shorten that timeframe a bit. Mnuchin previously said that he can get 50 million payments out pretty quickly once given the green light.

Those who need to wait on a physical check in the mail may have to hold out a lot longer. That's because the IRS can only mail out paper checks in batches of five to seven million per week. That means some people could wind up waiting until February or beyond to get their money.

Since this isn't the first mass distribution of stimulus payments, things may go more smoothly this time. In the first round of direct payments, there were hiccups. Notably, some recipients waited months for their money, and in the meantime, the IRS sent checks to deceased individuals. And during the first round of payments, many recipients got their money in the form of a prepaid debit card -- without a heads-up. Some people mistook those cards for junk mail and tossed them. It's likely that a second round of stimulus payments will include debit cards as well, but at least now the public may know to look out for them.

Lawmakers have dragged their feet on a relief bill, but it's clear that those who can do so will aim to expedite stimulus payments. A large number of Americans could receive their money in the first half of January, which is still less than ideal in the context of the greater economic crisis, but better late than never.