If you follow the news, you may have heard that Medicare is projected to run into serious financial trouble in the years ahead. However, the reasons behind this funding shortfall, as well as its implications for Americans, aren't well-understood by many people. So, here's a chart that sums up the problem with Medicare's financial future, some details about what it means, and what can be done about it.

The biggest problem with Medicare

Specifically, the funding shortfall mainly affects Medicare Part A (hospital insurance), as this is the portion of Medicare that is funded by the payroll tax and the Medicare Hospital Insurance trust fund. Parts B and D are primarily financed through general revenues and beneficiary premiums, not payroll taxes, so the same financial woes don't apply.

Simply put, the hospital insurance program is projected to start running a deficit in a few years, and the trust fund is expected to run out of money completely in 2030. Once this happens, the only money available to finance benefits will be incoming payroll taxes, which are expected to cover just 86% of the program's costs.

The reason for this expected financial dilemma can be seen in this one simple chart from the latest Medicare trustees' report: 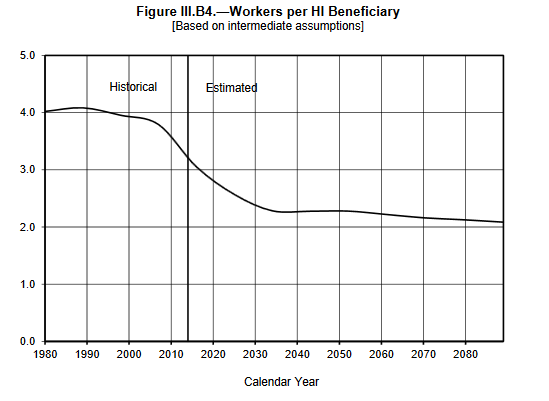 As you can see, from 1980 until the mid-2000s, there were about four workers paying into the system for every beneficiary. With the continuing retirement of baby boomers as well as longer overall lifespans, this has been steadily dropping and is projected to continue to do so rapidly for the next few decades. From 2030 until 2089, the last year covered by the chart, it is expected that no more than 2.4 workers will be paying into the system for every beneficiary.

In other words, the number of workers paying Medicare taxes for each beneficiary is being cut almost in half.

Medicare isn't running out of money... yet

Having said that, any headlines you see about Medicare being "bankrupt" or anything to that effect are completely overstating the current condition of the hospital insurance program. In fact, after a significant spending deficit from 2008 until 2014, Medicare Hospital Insurance is actually projected to run a surplus through 2023 before returning to deficits.

This means that the trust fund balance will actually grow for the next few years, although at a slow rate, but the deficits after 2023 are expected to get large pretty quickly, depleting the remaining reserves over a six-year period. 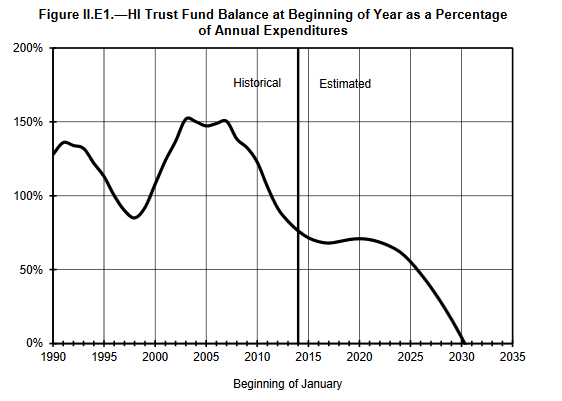 The most obvious solution to the problem would be to raise the Medicare portion of the payroll tax, and it's entirely possible that this will happen. After all, Medicare taxes have already been increased in recent years with the 0.9% Medicare tax on high earners and the 3.8% Net Investment Income tax imposed on certain investment income, which is part of the reason Medicare is expected to run a surplus for a few years. However, an across-the-board Medicare tax increase hasn't occurred since 1986, and the demographics have certainly changed since then, so an increase may be necessary.

In addition to a tax increase, there are a few other potential solutions. Just to name some of the possibilities, we could:

What will be done?

It's highly likely that something will be done to fix Medicare. After all, a recent Kaiser Family Foundation survey found that 77% of Americans feel that Medicare is "very important" and needs to be preserved. However, the exact reform package congress will pass, and when it will happen, is anyone's guess at this point.