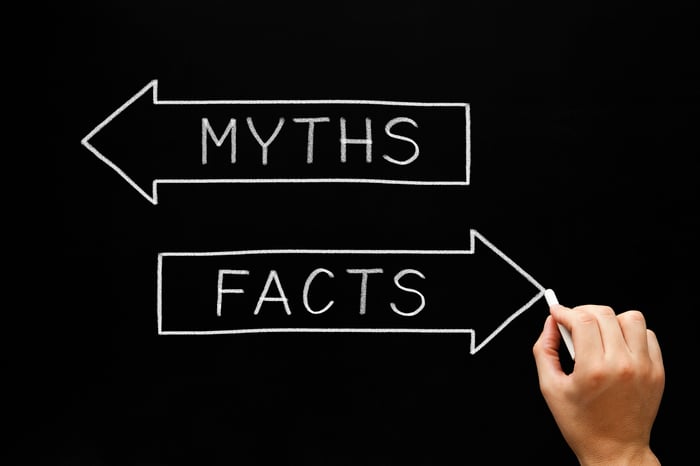 Because it's so critical to so many of us, it's smart to remove any misunderstandings you have about it. Here are seven Social Security myths debunked.

Myth No. 1: You're paying taxes into a Social Security account with your name on it

It can seem that, when money is removed from your paycheck, it goes into an account expressly for you -- one that will provide you with income in your retirement. That's not the case, though. The taxes from all the paychecks of people currently working are pooled, and then paid out to retirees collecting their benefits.

Your current contributions are supporting others, and when you retire, your benefits will be generated from the earnings of those working. That has been a great system for a long time, but with people living longer and our overall population aging, the ratio of workers to retirees has shrunk.

Myth No. 2: Social Security will run out of money soon

That shrinking ratio of contributing workers to retirees collecting benefits has put pressure on the Social Security system, and some changes will have to be made in the years ahead to put it on more solid footing again. Specifically, the ratio was 5.1 in 1960, with about 73 million workers supporting close to 14 million beneficiaries. As of 2014, it was just 2.8 -- and it's expected to hit 2.1 by 2034. Still, the program's future isn't as dire as some think.

According to several government estimates, Social Security funds are likely to become insolvent between 2033 and 2037 -- if no changes are made. If that happens, payment checks won't disappear, but they'll likely shrink by about 25%. That's not desirable, but it's far from a 100% cut.

Myth No. 3: Inflation will shrink your Social Security benefits over time

It can be tough living on a fixed income in retirement, as over time, inflation will shrink the purchasing power of any fixed payments you receive. Social Security payments are not fixed, though. They're adjusted regularly to keep up with the cost of living.

If inflation is steep, your benefits will be significantly increased. If it's modest, as it has been recently, there will be small increases or no increases in your benefits. This is an especially wonderful aspect of Social Security benefits.

Myth No. 4: Social Security benefits are based on your last decade of earnings

Most people don't know just how their benefits are determined, and some mistakenly think they're based on your last 10 years' earnings. In order to qualify for retirement benefits, you do need to work enough to amass 40 credits, which can be done in 10 years. But the size of those benefits is based on your earnings in the 35 years in which you earned the most money (adjusted for inflation). Thus, it's best to work for at least 35 years.

If you only earned income in 30 years, the formula will be incorporating five zeros, which will shrink your benefits. Even if you have worked 35 years, if you're currently earning much more than you have in the past (on an inflation-adjusted basis), you might consider working for another year or two, as each high-earning year will kick a low-earning year out of the calculation, boosting your benefits.

Myth No. 5: You have to have earned an income to collect Social Security benefits

If you haven't worked enough to have amassed those 40 necessary credits, you're not necessarily out of luck. Those with too few credits, or who have never worked outside the home, can still collect benefits -- if they are or have been married. Their benefits will be based on the earnings record of their current, ex-, or late spouse, and will generally be between 50% to 100% of the spouse's benefit. (Divorcees will need to have been married for at least 10 years and to not have remarried.) Myth No. 6: It's always best to delay collecting Social Security until age 70

It's true that, for every year beyond your full retirement age that you delay, your benefits will grow by about 8%. Delay from age 67 to 70, and your benefits will be about 24% bigger. If your full benefits would have been $2,000 per month, they would grow to $2,480, representing a difference of $5,760 over a year. That certainly makes it seem like delaying is always best. It's not, though -- which should be good news to the millions of Americans who would find it difficult or impossible to delay.

As the Social Security Administration has explained, "If you live to the average life expectancy for someone your age, you will receive about the same amount in lifetime benefits no matter whether you choose to start receiving benefits at age 62, full retirement age, age 70 or any age in between." After all, delaying starting to collect from age 67 to age 70 means you'll miss out on three years' worth of payments -- that's 36 payments. Still, sometimes it can make sense to delay -- if, for example, people in your family tend to live extra-long lives, and you're able to do without benefit checks for a while.

Myth No. 7: Social Security income will be enough to support you in retirement

It's true that Social Security income provides much, or most, of many people's retirement income, but don't assume that you'll be able to live comfortably on just that, or mostly that. The average Social Security retirement benefit was recently $1,348 per month, or about $16,000 per year.

If you've earned above-average wages, you'll likely collect more than that, but the maximum benefit for those retiring at their full retirement age was recently $2,639 per month (about $32,000 for the whole year) -- still not a hefty sum. If you're married and collect two sets of Social Security checks in retirement, you may be able to live comfortably on that income, but the death of one spouse can result in financial hardship for the other.

The more you learn about Social Security, the more effective your decisions regarding it will be.