Are these the next dividend juggernauts in the making? 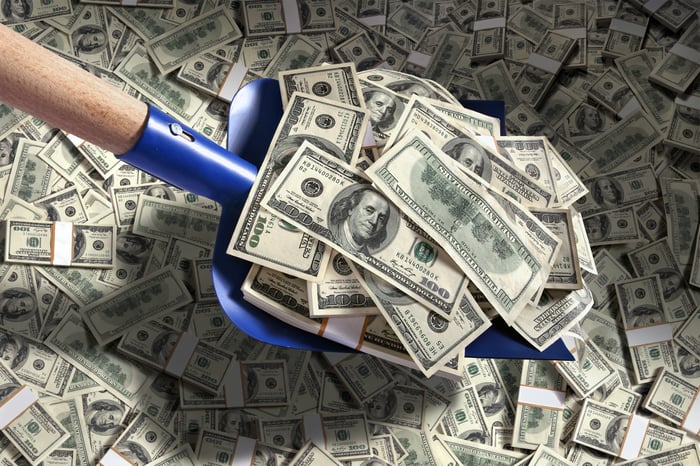 If you like dividends then you've come to the right place. We at The Motley Fool firmly believe that dividend stocks can lay the foundation for a solid financial future.

In addition to helping hedge against inevitable stock market corrections, dividend payments act as a beacon to notify investors of a company whose business model has stood the test of time. Think about it this way, a company is unlikely to pay a regular dividend – let alone grow that dividend over time – and share a percentage of its profits if its management team didn't believe it was on track to grow its top- and bottom-line.

Additionally, dividend payments can be reinvested back into more shares of stock in what's known as a dividend reinvestment plan, or DRIP. Setting up a DRIP can often be done with the click of a mouse in your brokerage account, and the extra shares purchased with your received dividend payment typically have no commission charge attached. Through a process known as compounding, you'll build wealth by owning more shares of stock and receiving successively larger dividend payments, which get reinvested into even more stock in a repeating cycle.

Sometimes the markets' most exciting dividend paying companies aren't those with high yields, but are instead businesses that are rapidly growing their payouts. The following three companies fit the bill with their annual payouts growing by more than 1,000% since 2011.

Though airlines are not often known for their dividends, Southwest Airlines (LUV -0.82%) is turning heads with its dividend growth of more than 2,100% over the past five years. Following the $0.018 paid out cumulatively in 2011, Southwest is on track to pay shareholders an extrapolated $0.40 in annual dividends going forward.

A number of factors can be pinpointed for the steady growth witnessed at Southwest. Among them is the way Southwest manages its fleet. According to the CAPA Fleet database in Sept. 2015, Southwest owned about 83% of its planes and leased just 17%, which means it has pretty good financial flexibility in terms of selling existing aircraft to raise capital to purchase younger planes. Furthermore, Southwest has made a habit of buying secondhand planes to keep its costs from ballooning since new planes are expensive and can bog down a balance sheet with debt if management isn't careful.

Loyalty initiatives are another strong point for Southwest. The company's "bags fly free" campaign allows it to be the only national airline that doesn't charge bag fees for the first two checked bags, which nets it major brownie points with passengers. Like its peers, Southwest also offers its Rapid Rewards credit card in an effort to keep consumers loyal to the brand. Its efforts do seem to be working, with Southwest Airlines ranking second in customer satisfaction (789 points) in J.D. Power's annual satisfaction study. Year-over-year, Southwest improved in all seven categories measured, and it now sits just one point behind JetBlue for the top spot in J.D. Power's annual satisfaction study.

Despite Wall Street being disappointed with Southwest's second-quarter earnings results in July, the company nonetheless delivered record quarterly GAAP income, and record load factors during each month of Q2. Sounds like a pretty solid performance to this investor, and it could make Southwest worth a look for income investors.

Another dividend juggernaut in the making is credit processing facilitator MasterCard (MA -0.20%). Accounting for its 10-for-1 stock split, MasterCard paid just $0.06 for the full year in 2011. Based on its current payout, MasterCard is on track for $0.76 annually going forward. That's an increase of 1,167% in five years.

What makes MasterCard such an intriguing company is that it's still just touching the tip of the iceberg in terms of its long-term growth potential. According to MasterCard's management team, roughly 85% of the world's transactions are still being conducted in cash, meaning there's an opportunity for MasterCard to penetrate underserviced markets in Africa, Asia, and the Middle East. This expansion could be a multi-decade growth opportunity for MasterCard and its peers.

Speaking of its peers, the barrier to entry in credit processing is extremely high because of the substantial infrastructure costs associated with payment processing, as well as the intangibles of being well-recognized and accepted by merchants of all sizes worldwide. There are really just a small handful of viable payment processing options, which means little in the way of surprise competition for MasterCard.

Lastly, MasterCard benefits from solely relying on credit processing and not actual lending. Though peers American Express and Discover Financial Services can double-dip by acting as the processor and lender in a transaction, during times of economic contraction it can also leave AmEx and Discover on the line for loan delinquencies. With no fear of delinquencies, and a presence in most global markets, there's little that slows down MasterCard's growth.

It's yield of 0.8% might not seem all that impressive, but it has the cash flow to significantly grow its payout in the coming years.

Lastly, Brunswick (BC -0.09%), a designer and manufacturer of marine engines, electronics, and instrumentation for the consumer and commercial marine markets, has delivered impressive dividend growth since 2011. Following a single payout of $0.05 per share in 2011, Brunswick is on track to divvy out $0.60 to its shareholders in 2016, good enough for 1,100% growth in five years. Beginning in 2014 Brunswick began paying a quarterly dividend as opposed to a single annual payout.

One the prime factors that's helped Brunswick in recent years are historically low lending rates precipitated by the Federal Reserve's dovish monetary policy. Low interest rates have played a role in encouraging boat sales. Since boats aren't cheap, low lending rates have made them more affordable for American families, and the replacement cycle for engine components has remained robust. As noted by Brunswick in its earnings presentation, retail unit growth for U.S. powerboats has averaged better than 5% over the past five years. According to Brunswick's second-quarter earnings report, sales grew 9% and its market share continues to expand.

In addition to low lending rates, low fuel costs have also been a positive for its marine engine and parts segment. It's unclear when crude oil prices will rebound, but for the time being Brunswick continues to benefit on both the consumer and commercial end.

Acquisitions have been another key component of Brunswick's success. In July, Brunswick gobbled up privately held Thunder Jet, a builder of heavy-gauge aluminum boats that'll help expand the product portfolio of Brunswick's Freshwater boat division. In January Brunswick purchased commercial fitness manufacturer Cybex for $195 million, in an attempt to diversify its portfolio away from marine products. In 2016, the acquisition is expected to yield $0.08 per share in accretion. By 2018, the buyout could yield an extra $0.20 in annual EPS.

With organic and M&A-based growth prospects, it's possible Brunswick's yield growth is just getting started.

The Motley Fool owns shares of and recommends MasterCard. It also recommends American Express. We Fools may not all hold the same opinions, but we all believe that considering a diverse range of insights makes us better investors. The Motley Fool has a disclosure policy.