Please ensure Javascript is enabled for purposes of website accessibility
Log In Help Join The Motley Fool
Free Article Join Over 1 Million Premium Members And Get More In-Depth Stock Guidance and Research
By Selena Maranjian – Sep 29, 2016 at 6:25AM

Many older Americans are struggling with crippling debt, even after retiring -- and that's a particularly bad situation in retirement. 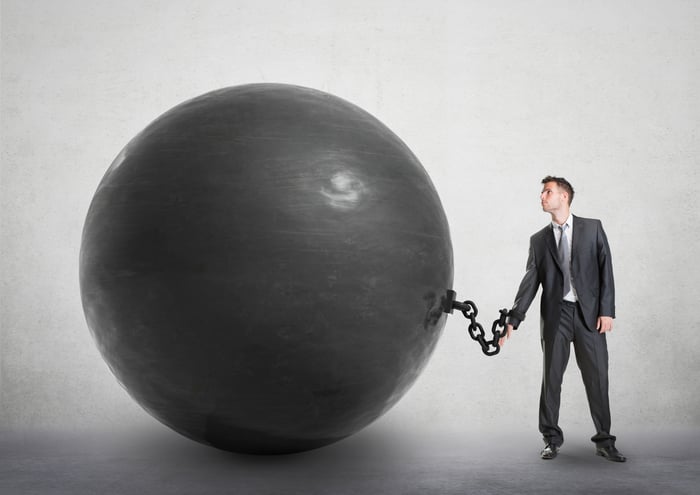 It's not a secret that many American households are saddled with lots of debt. Young people often have hefty student loan debt they're struggling to pay off -- and credit card debt also has many older folks feeling financially pinched.

It's a mistake to assume that people typically have their finances under control as they enter retirement. The reality is that many older Americans are still struggling with crippling debt, even after retiring -- and that's a particularly bad situation in retirement.

Retirees saddled with significant debt is a big problem, because they're often living on smaller incomes than they used to, and it's therefore harder to make debt payments. Consider these recent findings from the folks at ValuePenguin: As of March 2016, the average total credit card debt (for households that carried revolving balances) was $16,048. Remember that that's just an average, so plenty of households are carrying more than that. And that's just credit card debt -- it excludes car loans, mortgages, student debt, and so on.

The overall average household credit card debt in America (encompassing those with and without revolving debt) was $5,700, while the median was $2,300. That's promising because it means that most people are carrying significantly less debt than $5,700 -- but it also means that there are plenty of extremely high debt loads out there that are skewing the average higher.

Taking a closer look at that $5,700 figure, ValuePenguin found that the average was considerably higher for those aged 65 and older, at $6,351 -- and for those 75 and older it was still steep, at $5,638. One major contributor of that for many seniors is medical debt. It's no secret that healthcare is very costly, and our insurance policies don't cover everything.

Basically, it can be very hard to get ahead, or even to live comfortably, if you're carrying a lot of debt. Not only can it keep you worrying and losing sleep, but it can also divert many valuable dollars to interest and principal payments that could otherwise have been used to shore up your retirement war chest, or for a number of more productive uses -- such as food or housing. And if you're already in retirement, being saddled with debt can constrict your income stream.

Fortunately, all is not lost if you're struggling with debt -- even if you're in or near retirement. There are still some actions you can take to improve your financial condition.

The best course of action, of course, is simply to avoid ending up deep in debt in the first place. If it's not too late for you, be sure not to charge more than you can afford to pay -- and pay your bills in full and on time. Budget conservatively, and have emergency funds available for financial crises such as a costly healthcare expense. Being able to borrow money when needed is handy, but it can sometimes get you into trouble, too.