J. Paul Getty was once the world's richest person, back when being a billionaire was a singular achievement. The oilman made his fortune in large part by founding the Getty Oil Company, which sold its reserve assets to Texaco in 1984 and survive as part of what is now Chevron (NYSE:CVX). You can still see the Getty name on gas stations in some parts of the U.S., but the most important family legacy is the wisdom that J. Paul Getty gave to the world. Below, you'll find 10 of the best quotes attributed to Getty and some thoughts on why they're still relevant today. 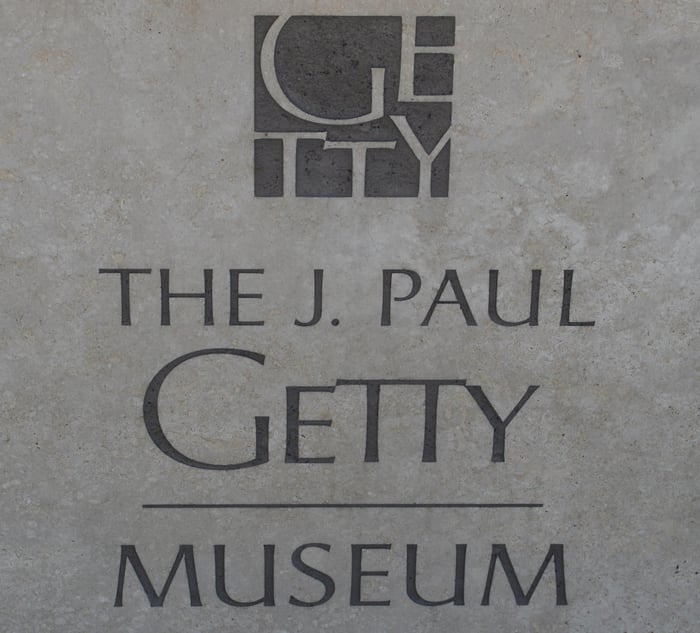 Getty is best known for the museum that bears his name. Image source: Randy Robertson via Flickr.

The energy business was clearly good to Getty, but this advice works on a figurative level as well. Hard work is an essential component of doing well, but a bit of luck is also vital. Only with both can you hope to achieve Getty's status.

If you can count your money, you don't have a billion dollars.

For many, being rich means being able to count the vast reserves of money you have. Yet as Getty notes, being truly rich means not really having to pay much attention to counting it at all. Those who have vast financial reserves have the luxury of not having to concentrate on it as much as those with more modest savings.

Getty's words on the systemic risk of debt were especially relevant during the 2008 financial crisis, when a credit crunch left many borrowers overextended and having to scramble for capital. Yet in large part, it was the financial institutions rather than the borrowers themselves that suffered the most from the credit crunch, showing how important it is to keep discipline in credit decisions.

I would gladly give all my millions for just one lasting marital success.

Money is a valuable commodity, but it's not the only key to happiness in life. Even a man with Getty's wealth can relate to the idea that there are successes that eluded him in his personal life, and that apparently troubled him throughout his life.

I buy when other people are selling.

Like many other successful businesspeople, Getty believed in the power of contrarian thinking. Looking for opportunity when others are fleeing a market can open up the best chance to pick up bargains, and Getty used that tactic to his advantage in the energy markets throughout his career.

Oil is like a wild animal. Whoever captures it has it.

One challenge in the energy industry is that oil and natural gas are mobile and can flow across property lines. Getty knew that in many cases, being the first to drill meant getting more production than subsequent drillers, and that natural fact is one reason why even major price declines don't always deter producers from continuing to pump oil and gas while they're plentiful and available.

The employer generally gets the employees he deserves.

Getty understood the importance of good management of the people he worked with. Many corporate leaders don't make good managers of personnel, and that often leads to problems within an organization. By being smart about managing people, you can build employee loyalty and improve your business prospects as a result.

The Roaring 20s were the period of that great American prosperity which was built on shaky foundations.

The 1920s bore a close resemblance to the more recent boom in the 1990s, in which technology led markets dramatically higher before falling off. For investors, the takeaway from Getty's quote is that even when times seem good, it's always worth looking to make sure that stock market gains are warranted. If they aren't, then a reversal of fortune can be quick and painful.

9. On keeping an open mind

In times of rapid change, experience could be your worst enemy.

Society values people who have past experience, because they're seen as having an understanding of the way the world works in a particular area. However, in some cases, that experience can hold you back if it stops you from recognizing the value of a novel approach. Too often, experienced but risk-averse people don't adapt to changing conditions fast enough, and that can leave them behind for good.

The meek shall inherit the Earth, but not its mineral rights.

Getty didn't hesitate to fight for what he wanted, and that sometimes caused conflict. Nevertheless, he saw it as critical for people to be active and aggressive rather than simply expecting success to come without effort, and his life shows the results of following that philosophy.

Many see J. Paul Getty as a model to follow in building wealth. As the quotes above show, his ideas still have value 40 years after his death.