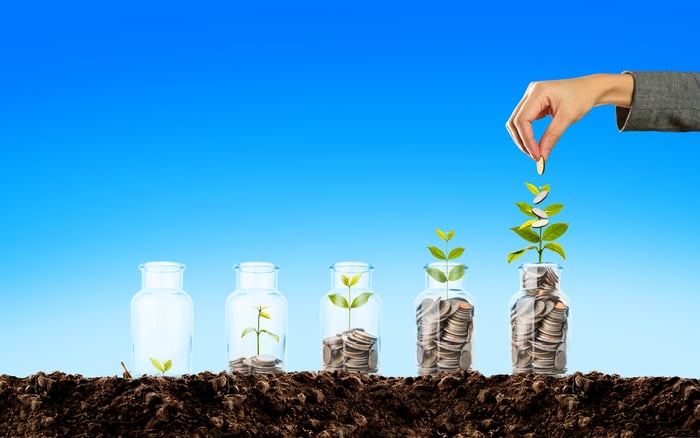 Social Security provides a solid foundation, but stocks that pay steadily increasing dividends are the best bricks for building a retirement castle. Shares of Amgen (NASDAQ:AMGN), Deere & Co. (NYSE:DE), and McDonald's (NYSE:MCD) all offer dividend yields above the average stock in the S&P 500. More importantly, they're well positioned to supplement your benefits with increasing payments for years to come.

Fear of political backlash over escalating prices has depressed drugmaker stocks across the board. Shares of blue-chip biotech Amgen have been trading at just 16.7 times trailing earnings, offering a dividend yield around 2.5%. With the average stock in the S&P 500 sporting a trailing PE ratio around 24.3, and a 2.15% dividend yield, it's too cheap to ignore.

While sales growth has been steady over the past five years, Amgen's focus on efficiency has allowed operating profits to grow a stunning 112.3%. It's been using its profits to grow its dividend at a blazing pace, while building a stable of potential new blockbusters (drugs that generate over $1 billion in annual sales) that includes a next-generation cholesterol drug that could add more than $4 billion annually to its top line. 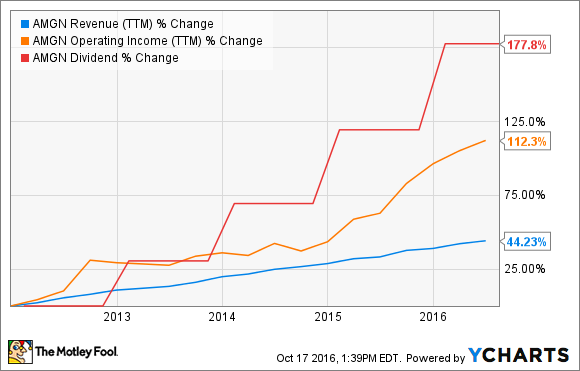 Over the past three years, Amgen increased its dividend at an outstanding 29.9% annual growth rate. Despite the rapid raises, it used just 36.3% of profits recorded over the past year to make payments. Dividend-to-profit payout ratios around 60% to 70% are generally considered sustainable, which which gives this company plenty of room for more big hikes in the years ahead.

The world's population is steadily rising, but available farmland isn't. Deere & Co. has benefited from the constant need for increased agricultural efficiency for generations. With an iconic brand, and an enormous network of equipment dealers, it's well positioned to continue growing, with some dips along the way.

Heavy equipment sales are fairly cyclical, and Deere is in a rut along with its industry peers. While the company increased its dividend 114% since 2010, the quarterly payout has been frozen at $0.60 per share since 2015. At recent prices, the stock offers a nice 2.8% yield at a comfortable 48.5% payout ratio. 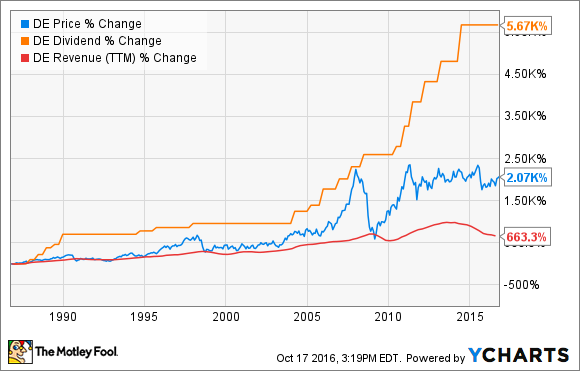 This isn't the first time Deere has kept its payout steady during a downturn, and it probably won't be the last. If you're nervous about putting your chips on green and yellow, consider the stock's performance over the past 30 years. Investors that held on through several difficult cycles watched their dividend payments rise 56-fold, and a 20-fold increase in their principal investment probably made riding out the downturns much easier.

If you can't digest cyclical growth, perhaps the 41-year track record of increased dividend payments at McDonald's will whet your appetite. The company suffered a revenue freefall in recent years but remains one of the world's most recognizable brands. With 36,000 locations, the leading restaurant chain also enjoys economies of scale that allow it to profit at price points its smaller competitors can't match. These competitive advantages, and a plan to refranchise 4,000 restaurants by the end of 2018, should allow it to continue raising payments throughout your retirement.

Signs that the company's turnaround plans are working are easy to spot. Sales have stopped plummeting despite losing some revenue from newly refranchised stores. Toward the bottom line, operating expenses in the first half fell enough to allow a 12% increase in operating income over the same period last year. 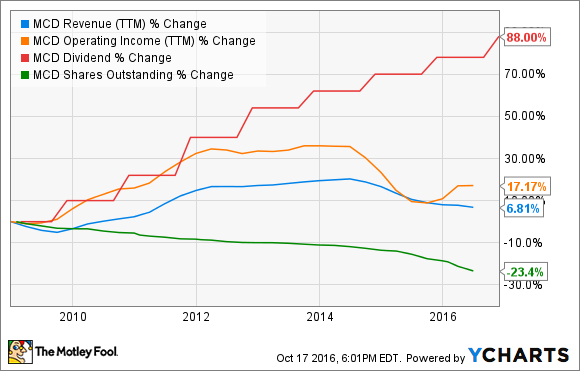 McDonald's recently raised its quarterly dividend about 6% to $0.94 per share, and at recent prices the stock offers a nice 3.3% forward yield.

Looking ahead, McDonald's might not be able to boost payments at the same pace as Amgen, or Deere, but steady raises shouldn't be too difficult. A trailing payout ratio of 68.8% is sustainable, and massive share repurchases will make quarterly payments less burdensome going forward.

The Social Security Administration does increase benefits to keep pace with inflation, but those increases pale in comparison with the pay raises these three companies have shown they can deliver. Whether you've already retired or have decades to go, these dividend stocks could make your golden years a lot more enjoyable.